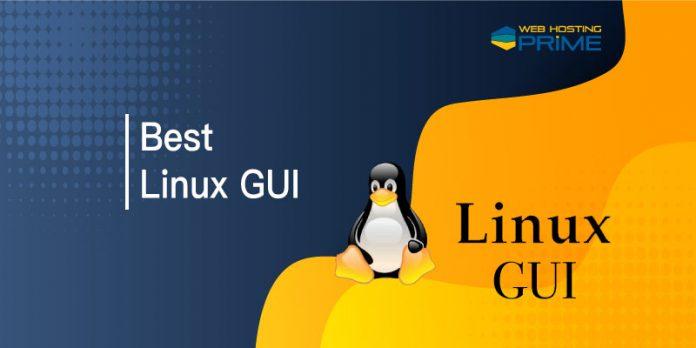 Have you used both Windows and macOS? If the answer is yes, you probably know it does not take more than a second for us to recognize a screenshot from any of these operating systems. Well, the reason is simple.

All of us get the same thing to experience when it comes to desktop environments on both these operating systems. But things are not the same with Linux, which is all about choices. When you install a Linux distro on your system, you can choose from hundreds of desktop environments. Therefore, you can easily select the one as per your requirement.

But, how do you decide on one when so many options exist?

Well, things might be confusing up until this point. But, since you have already made it here, you must not worry anymore. Here, we have reviewed and prepared a list of the ten best Linux GUIs to offer you the best experience for your Linux journey.

Starting from customizability, ease of use, stability, and speed, we have considered all the major points you should consider while choosing the best Linux GUI for your system. Let’s get to the list below:

10 Best Linux GUI to Choose From

GNOME is the most popular Linux graphical user interface and is the default desktop environment in Ubuntu and Fedora. The GUI is compatible with touch screen devices and traditional computers.

The interface looks similar to mobile devices as the panel sits on top of the screen. It does not have a dock or a window list. You can interact with different programs and windows by opening the Activities Overview, where you will find apps, opened software, and virtual desktops.

Thanks to GNOME Extensions, which extends the workability of the desktop environment and makes it perfect for creators. If you are in a profession such as web or app development, designing, writing, illustrating, or you are a musician, GNOME can offer you the best experience.

KDE Plasma often referred to as the Plasma desktop, is another popular Linux environment out there. People mostly use GNOME as their primary Linux GUI option, but KDE can be secondary. Plasma is highly customizable and easy to use. It is lightweight and was designed to give users the ultimate control over their Linux OS.

The GUI makes the on-screen components widgets you can move, resize, or delete as per your comfort. Moreover, you can tinker with your Linux Plasma desktop to make it look and feel like any other desktop version if you like.

KDE developers use Qt and not GTK+ so if you think GNOME and Plasma are related, don’t. KDE itself comes with a range of options that helps you get the best out of the Linux operating system.

The latest release of KDE is Plasma 5, which comes with some of the greatest improvements and brand new features. Moreover, the new version has made the interface more clean and readable compared to the previous versions.

The graphics in Plasma 5 also work better than in its previous version. And it comes with the Dolphin file manager that helps you manage and control your data smoothly.

Mate Linux desktop environment is related to the GNOME 2 version. Developers created this one to please the GNOME 3 users who were disappointed with the latest release.

Though MATE is based on GNOME 2, it has a much-improved desktop environment. If you have experience with Ubuntu MATE 20.04, you may find MATE suitable as a Linux graphical user interface.

Moreover, if you are a GNOME desktop fan but do not like the new version of GNOME somehow, the MATE GUI is for you. MATE has a nice collection of basic desktop applications and various built-in useful tools.

You will find the MATE desktop in some popular Linux operating systems, such as Linux Mint and Manjaro. These Linux distros use MATE because of its customizing ability, robust user experience, and lightweight build.

Due to being a fork of the GNOME desktop environment, Cinnamon is widely used in various Linux systems. Cinnamon forked with GNOME at the time when the Linux GUI was going through a lot of changes in the environment.

People use Cinnamon for its ease of use, and it blends with new ideas that help you experience a new yet simple way to deal with the Linux environment. Though Cinnamon comes off as a modern desktop environment, it also offers a traditional experience to the users. Therefore, you can take Cinnamon as a balanced choice for Linux desktops.

Unity Desktop is another choice for the GNOME desktop environment that works fine with well-known Linux distros. It was first started in 2010 to offer users a consistent and sophisticated computing experience.

Though Unity is a unique desktop environment, it is integrated with GNOME applications and libraries so that various technologies can work together to improve everything.

Unity Desktop comes with Compiz windows manager, Nautilus file manager, a system dashboard, and many other features and components that work together to promote a better work environment.

Unity is easy and simple to use. Even if you don’t have experience with Linux, you can easily get yourself accustomed to the Linux GUI.

If you are looking for a modern and lightweight desktop environment for your Linux system, Xfce Desktop may help you. Xfce is an easy-to-use option for new Linux users that uses low system resources and is incredibly fast.

Xfce’s simple yet powerful UI contains an Xfwm windows manager, thunar file manager, an application manager, a desktop manager for background images, desktop icons, and so on. Even though Xfce is not a heavy graphical user interface, it usually comes with so many features that you won’t ignore it.

You can do a lot of customizations with this Linux desktop version, and with each update, you can fix any error that may appear on Xfce. We have noticed that Mate and Xfce have so many similarities in common, and that makes them each other’s competitors. Though Mate has not changed a lot over the years, you can use Xfce, which is a more reliable option.

LXQt Desktop is mostly used on Linux and BSD distributions and is much faster than other desktop options. It is also an open-source and free Linux GUI that is simple to manage and lightweight. LXQt originated from the Qt port of LXDE and Razor-Qt. Since these two do not exist anymore, LXQt has become more popular.

The best thing about this Linux desktop environment is that you can run it on traditional machines, but it will still feel and look modern. LXQt has newly released a version named LXDE, which is specially designed for cloud environments.

Since it is not resource-intensive, it costs remarkably low CPU power and RAM consumption. That’s why LXQt is easy to use and runs smoothly on old machines. It supports multiple languages and comes with a simple and elegant desktop style.

The Pantheon Desktop is a great environment for Elementary OS that is related to the Linux-based OS. Pantheon looks like a mashup of macOS and Windows desktops.

Though it does not come with many visual elements compared to other Linux desktop environments, it gives a clean and organized user experience. The apps in Pantheon offer a smart and stylish design that may look unique, but it is inspired by GNOME.

However, like other Linux GUI options, you cannot do many customizations with this one. Still, it’s the best Linux GUI option for those who are just switching from Windows or macOS to Linux.

Shortly known as DDE is also a fascinating desktop environment for Linux users. It is a simple, attractive, and productive Linux GUI developed by Deepin OS developers. Apart from working on Deepin OS, it works on several other Linux distros, such as Arch Linux, Ubuntu, and Manjaro.

Deepin looks like macOS, but it is much more attractive than that. It comes with various animations, layouts, and icon options, which is something you would be okay with even if it does not provide many customization options.

It is similar to Pantheon but comes with even fewer configuration options. You can perform the configurations on the pop-out side panel and launch applications from the screen’s bottom. Due to high resource usage, it is a bit sluggish sometimes.

Budgie is a young and new Linux desktop environment that originated in the Solus project. It offers a familiar interface that possibly reflects MATE and Xfce. Still, combined with the 2 other environments, it looks modern. It has some traditionalism in its interface that won’t ruin the user experience.

If you look closely, you will notice that the inspiration for Budgie comes from Chrome OS and mobile applications. Budgie looks simple yet classy, but you can tweak the environment to make it your suitable choice.

Now that you know about the 10 Best Linux GUIs, you can easily pick one according to your comfort and requirements. Before choosing a Linux GUI, make sure to learn whether or not the same is compatible with your Linux distro. In case you have a question, feel free to comment down below.