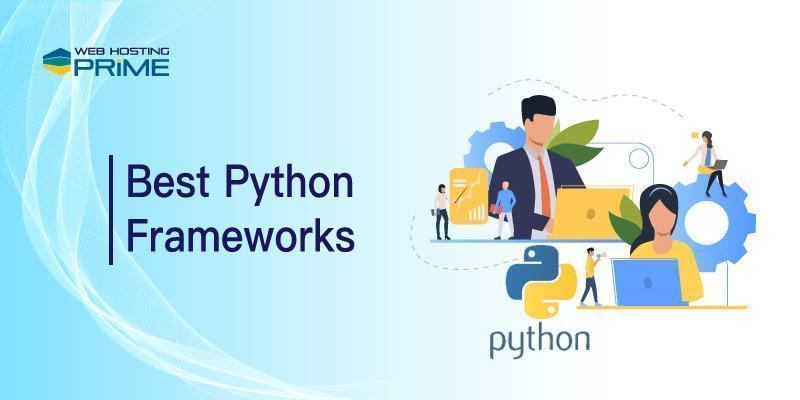 A framework is a kind of abstraction that is functional and robust and has been thoroughly tested and refined to make application programming much easier. It manages several pre-built features, such as handling and processing input and controlling hardware and device software.

Python has a wide range of frameworks as it is among the most popular programming languages. As per the Stack Overflow Developer Survey 2020, 55 percent of developers use the two most common Python web frameworks, Django and Flask, and would like to keep using them.

We’ve compiled a list of the top 10 best Python applications for developers to use in 2022. But before that, let’s understand how many types of Python frameworks are there.

Python frameworks are of 3 types:

Best Python Frameworks for Developers in 2022

Django is a common open-source high-level Python framework that enables rapid web creation and design. It is the most common full-stack Python framework, ranking among the top 5 web frameworks. It has a lot of features that make creating websites a lot easier.

Django aids in the development and delivery of highly scalable, fast, and robust web apps. It includes extensive documentation as well as group support. The Python framework comes with pre-installed packages and libraries that are ready to use.

It also includes URL routing, database version management, schema migrations, authentication, web server support, a template engine, and an object-relational mapper. Unlike other full-stack Python frameworks, the free and open-source Python framework has many built-in features rather than providing them as separate libraries.

Django’s object-relational model (ORM) is used to map objects to database tables. As a result, the technology can now operate for several databases and is easier to switch from one to the other. It comes with built-in support for MySQL, PostgreSQL, SQLite, and Oracle Database, but it can also use third-party drivers to support other databases.

CherryPy is a well-known Python object-oriented web framework. The platform makes it much easier to create web apps. It is one of the most widely deployed Python microframeworks that has been in use since 2002. As a result, it is very robust.

It takes a minimalist approach to application development and mostly employs the object-oriented paradigm. CherryPy comes with pre-installed modules and a flexible setup framework. It complies with HTTP/1.1 and is compatible enough to run several HTTP servers at the same time.

Any CherryPy-powered web application is a standalone Python software with its own integrated multi-threaded web server that runs on any Python-enabled operating system. An app like this can run anywhere where a regular Python app can.

Running CherryPy applications would not necessitate the use of an Apache server. For data access, templating, and other purposes, the micro-framework enables the developers to use some form of technology.

TurboGears is a framework in Python. TurboGears 2, the latest edition, is based on many web architectures, including TurboGears 1, Rails, and Django. It is a well-known Python web framework built on the ObjectDispatch paradigm.

TurboGears is extremely scalable and integrates the MochiKit JavaScript library. It has multi-database support, and all of its functions are introduced as function decorators.

The Python framework provides ToscaWidgets, which is used for fast frontend and application deployment synchronization. It has an MVC-style architecture, uses FormEncode for validation, and runs on pylons as a web server. It is extremely scalable, with command-line tools and PasteScript templates available.

Flask is a well-known Python web framework for building sophisticated web applications. The architecture makes recommendations but does not impose any dependencies or project configuration requirements. Flask is widely regarded as the best Python microframework because it is lightweight, adaptable, and scalable.

The Python framework is free and open-source and works with Google App Engine. It now provides advice rather than imposing any dependencies, and it has strengthened and secured support for cookies for creating client-side sessions. A built-in development server, HTTP request handling, and Jinja2 templating are all included in Flask.

Flask has a simple architecture and supports unit testing. Object-relational mapping, a modular app layout for file storage, and built-in debugging that is swift, uses Unicode, and is WSGI compliant are some of Flask’s other important features.

The micro web framework helps developers create a strong web framework base on which they can add whatever kind of extension they choose.

Web2Py is open-source and, therefore, free. Via a web server, a SQL database, and an online guide, this web framework effectively organizes the python application development process.

Bottle is a WSGI micro web platform for Python web applications that is fast, quick, and lightweight. Other than the basic Python library, the project has no other dependencies. It’s a WSGI web-based microframework for Python that’s easy, fast, and lightweight.

Bottle was designed to create APIs, but it can also create basic projects and applications for personal use.

Falcon is a WSGI library for creating quick web APIs and backends for apps. The platform supports CPython 3.5+ and PyPy 3.5+. Falcon is a Python-based web framework that improves on more general Python web frameworks in reliability, compatibility, and performance.

It’s a Python web framework for creating high-performance large-scale app backends, APIs, and microservices that’s incredibly stable and efficient. It encourages the use of HTTP and REST as architectural styles and has 100% code coverage.

Falcon has a highly structured codebase that is extensible and powerful and uses URI templates and REST-inspired resource classes for routing. It supports unit testing with WSGI helpers and mocks and handles DRY requests with hooks and middleware components, Cython support for increased speed, and natural and figurative HTTP responses.

According to a Sanic benchmark test, Falcon can accommodate further demands for the same hardware as all of its competitors. The Python framework strives for 100% implementation coverage. LinkedIn, OpenStack, and RackSpace are among the big companies that use Falcon.

CubicWeb is a free and open-source semantic web development framework written in Python. It allows developers to create web applications more quickly by reusing components (called cubes) and adhering to object-oriented design concepts. It is free to use under the LGPL license.

Quixote is a Python web framework for creating web-based applications. The end goal of this web framework is to offer flexibility and high performance to web developers.

Pyramid is a Python web framework that is both lightweight and open-source. The platform only includes the essential resources for virtually all web applications, such as URL mapping, authentication, and serving static properties (files like JavaScript and CSS).

Pyramid is a full-stack Python framework whose primary goal is to make it simple to create applications of any complexity. It offers robust research assistance as well as versatile construction resources. With the support of feature decorators, Pyramid makes sending Ajax requests easy.

Stable authorization and authentication are handled in a modular manner in Pyramid. With simple URL generation, renderers, predicates and templating, and object specifications, web application creation and deployment are much more fun, manageable, and efficient.

Quality measurement, compliance control, templating, detailed reporting, and HTML structure generation are also available. Pyramid’s most appealing feature is its potential to work for both small and large-scale applications. Furthermore, there are numerous tools available to expand Pyramid’s capabilities.

Frameworks make lives easier for web developers. They reduce development time by automating repetitive tasks, allowing developers to concentrate mostly on design logic rather than routine components. As it is one of the most widely used programming languages, Python has a plethora of frameworks.

Each Python framework has its own set of benefits and drawbacks. As a result, the decision of choosing one must be taken based on the project criteria and developer preferences.

This article details 10 of the most powerful Python frameworks that developers can use. But to use each of them in its full capacity, you must be proficient in Python, at least at the intermediate level.