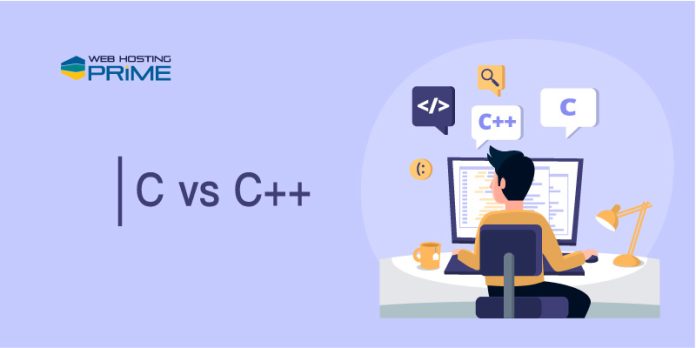 Both C and C++ are pretty popular languages in the development of a number of software programs. These two programming languages have been used for game development, creating a database management system, an operating system, GUI-based applications, and much more. Both of them have so many things to offer, so it becomes pretty challenging to choose one over the other. So, how will you choose between the two?

The history of C is pretty interesting because it was the first programming language developed to create programs on a computer. “C” stands for “computer,” and the person who developed it in 1972 was a man named Dennis Ritchie. He was working in the Bell laboratories of AT & T, which is located in the USA. There were some previous programming languages before C, such as B and BCPL, but none had as much influence as C. It completely changed how people wrote programs for computers and made it much easier to create new applications using C.

C was designed to work with the UNIX operating system during its initial development. Also, it inherited a number of features from the previous languages and molded their use in a much better way.

1. C Programming was building block for other languages

With the C language, you are getting what programmers want: an efficient and powerful language. It has a number of data types along with operators, which gives you a vast platform to test out your programming skills to create something completely new.

C is one of those languages that can be run on almost every computer. As a result, you can write code in one system and run it in another. This gives your code machine independence. If there are some errors while running the code on a different computer, all you need to do is fix those errors, which doesn’t take a lot of time, and you are good to go.

4. C can extend Itself

One of the best things about using C as your programming language is that you get to create your own standard library, which can then be used to simplify code. This ability of C helps it to extend itself. C has its own set of functions like all other programming languages, but it is one of those few languages that allow a developer to add in their own standard library and then use it on programs.

C uses proper procedure when writing a function or its subroutines. This also helps the C compiler find the code’s structure. In addition to this, with the procedural programming language, you can easily find which part of the code is causing all the problems, and you can fix them with ease. Keep in mind that variables in C programming are declared before you use them alongside functions.

1. No Support for OOP

Most of the features that use Object Oriented Programming (OOP) are missing. As a result, a programmer needs to enlist the help of a procedure-oriented language to create code and make it run.

2. No run-time checking Is available

There is no way you can check a code during run-time. For example, if you are passing a string value when you are taking the input for a parameter, Then if somehow you enter an integer or a character, it will not show an error and accept it.

Constructor and Destructor are Missing

As we said earlier, C doesn’t have object-oriented features. As a result, you are not going to find a function Object() { [native code] } and a destructor present in its functions or library. On the other hand, if you still want to use them, you need to create them for each variable manually with the help of functions or by any other method.

C++ is a combination of both high-level and low-level programming languages. Thus, it is considered to be a middle-level language. The person who designed and developed it was a Danish computer scientist named Bjarne Stroustrup. The main aim behind designing this programming language was to make something more dynamic in nature and flexible. But at the same time, it needs to have all the features of C programming.

“C++” in its early stages used to be called “C with classes,” but it was renamed “C++” in 1983. The addition of “++” signifies the addition of variety in programming; therefore, C++ basically means a programming language that is higher than C. The developer, Bjarne Stroustrup, added the features of OOP without making any significant changes to the essential components of the C language.

In this section, we will discuss the benefits of using C++ and help you understand why C++ is considered the go-to programming language for most programmers.

C++ allows developers to code without having to worry about the system’s hardware. As a result, you can easily migrate an application’s development from one computer to another, and everything will work perfectly. One of the best examples of this feature is how a code works flawlessly when copied from a Windows operating system and pasted into a Linux distribution.

It is certainly known as a mid-level programming language, but we can also treat it as both a high-level and a low-level programming language simultaneously. The high-level features allow it to develop games and create complex desktop applications. At the same time, the low-level features will give you the ability to build kernels and system drivers.

There are three paradigms that C++ follows, the first being generic, where you can use a single idea of code that can be used for solving multiple problems. An imperative is a method that works by using steps that change as the program changes. Last comes object-oriented programming, where you will be using methods and classes to achieve reusability and modularity.

C++ is more of a compiler-based programming language. Thus, you don’t have to add in a special run-time when you need to run a program. As a result, you will find that they are pre-interpreted. This also makes the code compile faster and become more powerful. Even if we compare the compilation speed and execution speed of C++ with that of C, we can clearly see that C++ is much faster than these two. That’s why it is preferable when it comes to creating games, complex applications, and drivers as well.

Once you are sound at making code in C++, you can easily land yourself an excellent developer job. You can be responsible for developing a financial application or creating a video game that can be played on a desktop. With C++, you have ample skills to start your career and earn an income. C++ has tons of job opportunities, and there is no way that C++ is going off-market anytime soon.

Below, we have talked about some of the disadvantages you have to overcome when programming in C++.

For many programmers, understanding pointers’ concepts takes time, even after writing tonnes of code for the same. Still, people have difficulty grasping the concept of pointers. On the other hand, pointers are also guilty of consuming lots of memory. The misuse of pointers, such as wild pointers, can easily lead to the crash of the whole system or make it behave anonymously.

C++ gives users the complete freedom to manage their computer memory with the help of DMA. But one feature is missing: a garbage collector, which automatically filters out any of the unnecessary data stored in a program.

There are no built-in threads; for some people, threads are pretty concepts, and in the initial phase of C++, the concept of a thread was nowhere to be found. But now, C++, with time and advancements, is able to handle lambda functions.

If you are new to programming, the likelihood that your C++ code is not secure is quite high. Even in any other programming language, poor code can result in a hack that gives access to controls, data, and the application’s execution flow. There are a number of security issues that present themselves as you work on C++, even though it works on the principle of OOPs.

Side by side comparison of C Vs. C++

Well, from the comparison, the clear winner between C and C++ is the latter one. One of the main reasons you should be learning C++ instead of C is that when you learn C++, you are learning concepts of C that can be used in C++ programming. In addition to this, learning C++ is more accessible for many people as it takes less time and is more valuable when it comes to landing a job.

On the other hand, C is still relevant, and if you have plenty of time to learn programming from the very start, then learning C is an excellent option for you. C can help you improve your programming and logical reasoning. As a result, you will be able to create more precise code, which is better in a number of ways, but most importantly, it can compile in a short time and take less space.

So this is what C and C++ bring to the table; C++’s being a superset of C makes it easier for users to learn the concepts of two languages at once when they are making code in C++. It’s great to see that you have read the article till the end; we hope you have found this article to be of great use. Let’s take a recap and see what we have learned throughout this article. We have gone through the origins of both C and C++.

We also talked about similarities and differences. In addition to this, we have shown you their advantages and disadvantages separately. So you can make a choice as to which one is better for you. Please let us know if there is anything we have missed in the comments section; until then, happy coding!!

Difference between C++ vs C#