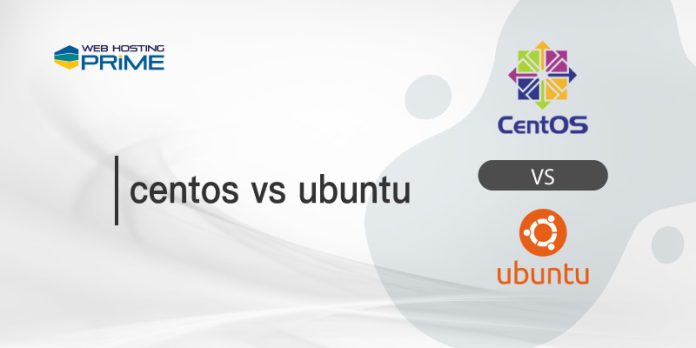 The world of computing has limited choices in terms of operating systems. Windows, Macintosh, and Linux are the most common. Windows and Macintosh are proprietary and heavily guarded by their developers, whereas Linux is open-source and supports a wide range of applications and operating systems. We’ll discuss two such prominent systems in this article.

CentOS and Ubuntu are highly preferred by Linux enthusiasts for various reasons which we will discuss below. CentOS is used by almost 4.5% of websites existing on the Internet, while Ubuntu has a market share of 14%. If you are building a web application, you might want to know which Linux OS is best for you. A comparison between CentOS and Ubuntu is provided in this article to help you get a clear picture.

A quick look at CentOS

CentOS is an acronym for Community Enterprise Operating System. It is an open-source Linux distribution based on Red Hat Enterprise Linux which is widely used in the corporate world. Released in 2004, CentOS is an enterprise-class operating system that is primarily used in Internet-based applications like web servers and email servers. The operating system is supported by a large community, and the current version of CentOS is 8.4.2105 which was released on 3rd June 2021.

CentOS is popular for many reasons including its high stability, security, and customizability that allows developers to be creative when developing software products. Red Hat Enterprise Linux is closely integrated with it, so it gets regular updates, making it a more secure option for enterprise applications.

A Sneak Peek into Ubuntu

Released in 2004, Ubuntu has been a favorite Linux distribution for people who prefer open-source platforms. Based on Debian architecture, Ubuntu is mostly used on personal computers and professional web applications. It has a large active community, and users receive frequent updates to remove bugs as they arise. Ubuntu comes with rich features and package groups that make it suitable for a wide range of projects.

Top-notch security features and a high level of customization make it a favorite for building enterprise-class web applications. Ubuntu versions are offered in two different flavors – LTS and Non-LTS. LTS stands for Long Term Support which receives longer support and updates than the standard version. LTS Ubuntu 20.04, which was released on April 23, 2020, is nicknamed “Focal Fossa”. The latest non-LTS Ubuntu version is 21.04 and is nicknamed “Hirsute Hippo.”

Primary Differences between CentOS and Ubuntu

Ubuntu is backed by a UK-based privately held computer software company. It means you can buy support contracts for your Ubuntu installation and web servers. CentOS, on the other hand, doesn’t have any official backing, but it does have support from third-parties, such as OpenLogic Inc., a software company. In other words, both Linux distributions are free, but you need to purchase support if you want to use them for enterprise applications.

Ubuntu is mostly used on desktops while CentOS is primarily used on web servers. In Amazon cloud services, Linux servers are based on CentOS.

Ubuntu receives updates every six months, and every new version receives support for five years. With each new version, the developers offer new software and features. However, due to more frequent versions, Ubuntu distributions are less stable than CentOS.

CentOS doesn’t receive frequent updates and any updates offered by the third parties are generally related to bug fixes and security patches to the major versions. The introduction of a new CentOS version depends on the RHEL schedule. Every major version receives support for 10 years. CentOS developers conduct extensive testing before every release, making it a more stable Linux distribution than Ubuntu.

Ubuntu employs the DEB package format for its software distribution. It also used an apt tool package to manage DEB packages. For example, you need to use commands like apt-get, apt-cache to access resources. In contrast, CentOS employs the RPM package for its software distribution. A program named RPM is used to manage the packages while a front-end tool DNF is used to create and manage dependencies, network repositories, and other actions. Before CentOS 8, the front-end tool was called ‘yum.’

Comparing the features of CentOS and Ubuntu

A common feature between CentOS and Ubuntu is that they’re both open-source and free to use. Both CentOS and Ubuntu can be downloaded from the Internet for free, and installed on your computer without affecting any other operating systems.

If you go by the number of software packages, Ubuntu has a definitive edge. Its software repository has tens of thousands of software that can be installed to extend the functionality of your computer. On the other hand, CentOS has only a few thousand software packages. However, the comparison does not end here. Graphical server tools like cPanel which are exclusively written for Red Hat systems are exclusively available on CentOS. While Ubuntu also offers similar tools, the most popular tools are available on CentOS.

Ubuntu developers have gone to great lengths to make the Linux distribution user-friendly. The graphical interface on Ubuntu is intuitive and easy to use. It also offers a search function that can help you find utilities almost instantly. CentOS has a steep learning curve and it would not be an exaggeration to say that it is only ideal for the advanced users. Besides having a user-friendly interface, Ubuntu also offers a rich knowledge base that includes tutorials and how-to-use guides. You can find a few how-to guides and forums on CentOS if you have any issues installing it.

Pros and Cons of CentOS and Ubuntu

Most Ubuntu servers are tied to smaller hosting applications like running SMBs servers and sites. The sheer number of Ubuntu servers used in hosting shows Ubuntu is considered a primary web hosting operating system in the web sphere.

CentOS runs older versions so new software might not be supported on the CentOS hosting servers. Also, the security updates are mostly backported from the Red Hat Enterprise system making it less independent. Despite all these drawbacks, CentOS is a stable and secure operating system used to run enterprise-level applications. One reason behind this is that it is compatible with most web hosting management panels like DirectAdmin, CPanel, and Webmin.
On the other hand, Ubuntu does not support cPanel and supports only a few management panels like Webmin/Virtualmin and VestaCP. Hence, medium and large enterprise applications that need cPanel for better resource management prefer CentOS over Ubuntu for hosting applications.

Things have changed for the better in the case of Ubuntu since Canonical has announced full enterprise support for Kubernetes deployments. If you’re not familiar with Kubernetes, it is an open-source platform for container orchestration. It supports the functioning of elastic web server frameworks for cloud applications. Kubernetes can be used in web hosting for scale and it also supports data center outsourcing to public cloud service providers. This development has helped Ubuntu increase its market share in cloud deployments.

Steam is a leading online gaming platform that allows developers to create interactive games. According to the Steam gaming platform, 30% of all Steam users are running Ubuntu while 49% of users use other Linux distributions. The point behind discussing this is to show how widely Ubuntu is used in different computing sectors.

So which is a better Linux distribution?

It is very hard to find a straightforward answer to the question as you need to consider several factors to make an informed decision. Several things go in support of and against both Linux distributions. In any case, we have presented you with the gist of the comparison between these two popular Linux distributions. You are free to form your own opinion based on your experience and knowledge.

The right operating system for you depends on various factors like how you plan to use it, the size of your business, and your Linux knowledge. For users new to hosting and small business users, Ubuntu seems to be a safer choice for several reasons like ease of use, good community support, and a huge knowledge base. CentOS seems to be a good option for large enterprise applications and users with advanced knowledge of Linux architecture.

Ultimately, both Ubuntu and CentOS have their positives and negatives, and you should select a version that meets your business requirements, demands, and needs.

MySQL vs NoSQL – A Detailed Guide