Home Email How Does Email Work? 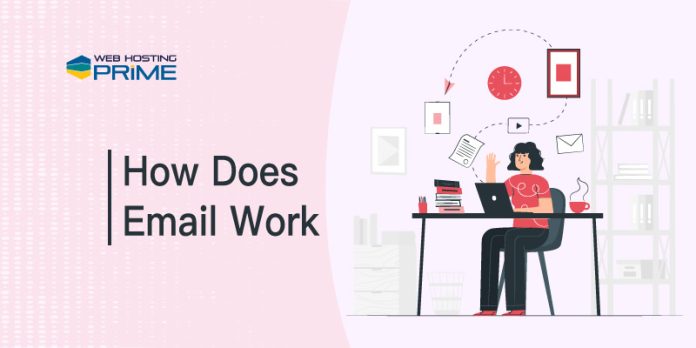 If you are someone who uses computers or laptops or even a smartphone, chances are you might have received or sent emails in your daily usage. It’s no surprise that even to this day, most of the formal messages, company proposals, and other things that are essential for work are sent via email as it provides the best security and encryption on the Internet. It might come as a surprise to you, but more than 2.8 million emails have already been sent and received as you are reading this sentence.

A working professional checks his email about 15 times a day. But one of the most common methods of sending and receiving information on the Internet is a mystery as to how it is done from one side of the world to the other in a couple of seconds.

Well, today, we are going to find out the same, and what other factors a person needs to take care of when they are sending the email. So let’s get the learning started.

Do you know when the first email was sent? The answer is in the year 1965 at the Massachusetts Institute of Technology (MIT). An email was a part of the institute’s compatible time-sharing system, which makes it possible for the users to share their files and messages on a central disk and then acquire them via remote terminals. Then came an American computer programmer named Tomlinson, the person who put the “@” behind the email addresses. He was the one who cracked it and found a way to send emails from one computer to the other.

By 1973, emails had become the standard for sending and receiving messages at Darpa, an organization where Tomlinson worked. Also, email has gone through specific changes during this decade, and now there are added fields like “to” and “from”. In addition to this, emails now can be forwarded to more than one person who was not initially a recipient of the email in the first place. Then one day Queen Elizabeth II did something extraordinary. She sent an email on Arpanet to become the first-ever head of the state to send an email.

Then in 1978, Eric Schmidt wrote the Berkeley Network, which was a part of his master’s thesis. This network was an early intranet service that allowed users to send messages over serial connections. Later in his career, Schmidt joined Google and was one of the most influential people in the success of Gmail. After this, many companies started creating their own emailing platform, such as Microsoft Mail in 1988, Lotus Notes which were launched in 1989; Outlook and AOL emailing service began in 1993, then came Hotmail in 1996. After that, we saw the rise of Yahoo! Mail from 1997. Finally, in 2004, Google launched its email service and named it Gmail. In the beginning, it was just an internal emailing system for Google employees. Paul Buchheit developed it in 2001. After years of invite-only beta release tests, Gmail was finally made available for the public in 2007.

So you send and receive emails regularly. The transfer of attached files, messages, and photos is almost instantaneous, and for the most part, we think it doesn’t cost a single dime to use it. But what happens under the hoods? Let’s try to explore the working of email. The full form of email is electronic mail. It is one of the oldest forms of communication via computers. There was a time when computers were as big as a single room of your home and to use them people had to dial up to access them. Each of the computers in those early days holds storage for the specific user.

Back in those days, people could only send emails to other individuals who were using the same system. But everything changed when Roy Tomlinson used the “@” symbol to send an email to another user who is using another method. To be fair, this is a simplification of what Roy was able to perform. But since that day, emails have been revolutionized, and the emails that we are using today are still working on that same principle that Roy Tomlinson invented.

From Sender to Recipient

Let’s start with the most common scenario where you are sending mail from your system to another person. So you send an email to one of your clients and add a proposal of your services. When you send this mail, you need to have an address which should be in the form of user@domain.ext. Let’s suppose the receiver’s email is happyindiancritic@gmail.com. When the email is sent by you it goes to the outgoing mail server via Simple Mail Transfer Protocol (SMTP). To understand the working of SMTP, you must think of it as your local post office. SMTP will check out the email address you have used for the recipient and the address to figure out a way to send your email correctly. Keep in mind SMTP doesn’t understand the domains.

The SMTP will contact the Domain Name Server (DNS) system, which works like a phonebook for the Internet. With the use of DNS, the SMTP gets to translate the domain’s address like gmail.com to its IP address which looks like this “172.217. 9.229”. Then DNS will look for the “MX”, which is a mail exchange server, and see if the following mail requires it or not. This is basically your post office looking in the map to see where the mail needs to be sent, noting down the address, calling the local post office (SMTP server) to check if the email address of the recipient is present there or not.

Once the SMTP server provides the information about the recipient’s email address being available. The SMTP server from your side will send the message to the target domain mail exchange server. This server is also known as Mail Transfer Agent (MTA). Now here, MTA decides where to put your email. Just like how the post office in your friend’s neighborhood will look for the best way to get the post delivered to your friend.

After that, once the post is delivered to their mailbox, your friends open up the mailbox and receive the mail. MTA will send the email to various clients that work via POP or IMAP; from there, the recipient of the email can check the message you have sent.

So now you know how an email is sent from one sender to the recipient. Now let’s look at the important data fields which are required to send emails over the network.

First is the message that you want to send over the Internet, similar to the letter you sent via postal service. The header of the email is pretty much identical to the header of the hardcopy letter. But some of the information which is present in the hardcopy envelope is a part of the message header instead of the envelope header. The header which is used in email has information that usually isn’t used in real-world mails. But they are pretty essential to deliver the email over the Internet and other troubleshooting tasks.

When you write an email, the envelope header is usually hidden on your mail, and the message header is the one that is visible to you. The combination of these two headers creates a full header.

If you have sent an email, then you might have looked at the email and found it has the following headers as “From:”, “To:”, “Cc:”, “Date:”, and “Subject:” The content of these fields are often similar because the From, To, Cc fields are the email identity of yours and intended recipients.

An email has more detailed information present that showcases its delivery process than a single postmark which is present in traditional mails. When the email gets through the delivery chain called MTA. The MTA adds up more interesting information along with the timestamps, MTA location, received fields, and the return path. The return path is the identity of the sender, so in case the email isn’t successfully sent, it can be returned to the sender.

When MTA accepts the email for the transfer, it adds up the received field on the mail. When MTA gets the mail to transfer it locally or relay the message, it records the email transaction information in the email’s envelope header. In addition to this, the MTA will also include a message ID that will appear in the MTA server logs timestamps which indicates the time of the transfer along with the identity of the sending MTA. As a result, in case you follow the received entries in their proper order, they will lead you back to the originating MTA but not to the sender’s email address.

It is essential to know about the true identity of the sending MTA as it holds valuable information when performing a troubleshoot or dealing with the malicious message. You will find that these messages will often contain a forged identity in the “from” and “reply-to” fields. To extract the true essence of the MTA, one can get it from the email header. The receiving MTA will add the receiving email in its received field only when the hostname provided by the sending MTA has a unique IP address.

When a receiver receives an email from a sender, this reply-to field will give them the ability to reply to the sender. Keep in mind the reply-to address doesn’t have to be an actual address. Spammers, the automated bounce handler, can handle user fake reply-to addresses so bounced messages.

So this was all about the history of email, now let’s have a look at some unknown facts that email has hidden from us for a long time.

So this is what email is all about, email is growing at a much rapid pace, and one of the significant concerns of email providers is to keep it safe and secure from hackers. Emails have the most vital information; as a result, every day, attackers are trying to figure out a way to hack into the email address and retrieve personal information. But email clients are not giving up on them and are providing more security than ever.

In this article, we showed you how email works; you can do a lot more than just send a message to another individual. In today’s world, it all depends on you, how you use the email.

Best Fake Email Generators to Use in 2022