Home Android How to Check for Android Version in Smartphones & Other Mobile Devices? 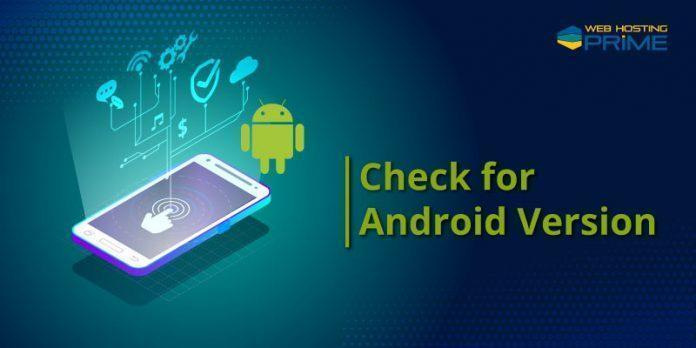 Being running on the largest number of, mostly, mobile devices across the world, Android is currently the most commonly used mobile operating system. It was mainly developed to support touchscreen mobile phones and tablets.

Developed by a group of developers known as the Open Handset Alliance, Android is backed by Google. Chances are high that you might be reading this article on your Android device, may it be your smartphone or your new tablet.

So, the question is, do you know how to check for the Android version on your device, be it a smartphone or any other mobile device. If your answer is no then keep reading as here’s how step-by-step. But before that let’s first know a little more about the world’s leading mobile platform.

Android’s user interface mainly depends on direct manipulation, which uses touch-inputs corresponding to real-world actions, such as tapping, swiping, pinching, along with reverse pinching to handle on-screen objects as well as a virtual keyboard.

The home screens mostly consist of widgets and app icons where the latter is for launching the associated applications while widgets are for delivering/displaying auto-updated information like the weather forecast, and news headlines. There are even third-party applications available on Google Play that can be used to refurbish the theme (display) of the screen.

The top of the screen has a status bar that has details about the device and connectivity. It can be pulled, by swiping, downwards to show a notification screen where you can see important updates of various applications and do a lot of other stuff.

How to Check for Android Version?

So, are you ready to check the Android version running on your device, then follow these steps:

How to Update My Device to the Latest Version of Android?

Different device models from various manufacturers receive Android software updates at different times. Whenever there’s a new update available for a device, it shows a notification alert showing the update along with its details, like download size, bug fixes, and what’s new.

Besides, you can also check the Software Updates section to regularly check for updates. This section also contains instructions and information regarding an update and how to proceed with it.

Usually, for smartphones, Android suggests having a Wi-Fi connection to update, probably due to having a size in a couple of hundred MBs to a few GBs. But, you can connect to the mobile network too to update your Android device to the latest available version of the leading mobile OS.

10 Things You Must Know About the Latest Android Version: Android 11

Android 11 was recently launched in September 2020. However, it has seen a limited release, for now, on a few smartphone series, including Google Pixel, Oppo, Xiaomi, OnePlus, and RealMe. This means that Android 10 is ruling over most of the Samsung smartphones along with other brands.

Anyways, unlike other Android versions (up to Android 10 Q), this version is not named after a delicious dessert, and it is called just Android 11. Though it was codenamed ‘Red Velvet Cake’ during the development.

As we are aware that Android 10 is the most-used Android version globally, it is better to learn more about it. The release of Android 10 focused on making our daily life easier with built-in support for novel technologies, like 5G and Foldable, as well as features leveraged by on-device machine learning.

Not to mention, Android 10 comes with over 50 modifications associated with security and privacy while offering more transparency and protection than ever while letting you have full control over your data.

So, here are 10 features centered around innovation, privacy, security, and digital wellbeing of a device, that you must learn about Android 10 version:

It suggests actions that simply mean that when someone receives a message in the form of a YouTube video or an address, they can open or navigate it in Google Maps or just open it in YouTube without any copy-and-paste technique. Smart Reply works on all popular messaging applications.

This allows you to move between tasks (screens), swiping, go backward, or simply pulling up the screen. If you haven’t tried it yet, then be assured that Gesture navigation is so convenient that you won’t prefer to switch back to visible buttons once you use it.

Android 10 allows you to turn your phone’s theme into Dark Theme. A lot of people prefer to turn on the Dark Theme as it’s easy on the eyes, plus it saves the battery too.

This feature allows the user to caption anything from videos to podcasts as well as audio messages over any application. You can even give captions to anything you record yourself. Moreover, the Live Caption is available on Google Pixel smartphones.

There is a new Privacy section available in Android 10 that offers settings like Web & App Activity along with Ad Settings all in a single place.

The user can only share location data with the application while using them. If an app accesses your location even when you are not using it, you will get a reminder regarding it. This gives you the liberty to decide whether you wish to share your location or not.

This feature sends important security and privacy fixes from Google Play to the phone. This way, you can receive the fixes as soon as they are available without waiting for an official update.

This is another important feature offered by Android 10 under Settings in Digital Wellbeing. As a parent, you can use this tool to fix digital ground rules, such as device bedtime, screen time limits, and time limits for a particular application. It also helps to review the apps used by children on their devices.

Android 10 also offers better control on when and where you are alerted by different notifications. It gives you an option to mark notifications as ‘Silent’ on your device so that they don’t make any noise or show on the lock screen.

Now you have Focus Mode in the Digital Wellbeing section, which lets you select the apps that are distracting and put them on silent till you come out of the Focus Mode.

Besides the above features, there’s lots more that Android 10 offers, like the new enterprise feature with different keyboards for your personal and professional profiles and gender-specific emoji.

Here are some important Frequently Asked Questions for you to know:

Question: Do I have to pay a cost for updating the Android version on my device?

Answer: No, you don’t have to pay anything for updating the Android OS as it is completely free.

Question: Will I need a Gmail account for using Android on my device?

Question: Will I be able to transfer content, including pictures, contacts, videos, files, etc., from one Android device to another one?

Answer: Yes definitely, you can do this through a Gmail account and by syncing your device with any other Android device. You just have to sign in to your Gmail account on any device you need to transfer the data to.

Question: How many Android apps can be opened at a time?

Answer: The number of apps that can be opened simultaneously depends on the device because the Android OS stops a few idle apps from running on the device. It is suggested that you close the applications you are not using in order to cut the battery consumption while helping your device to run at its optimal speed.

Question: Can we purchase an Android device online?

Question: If Google crashes, will there be a problem in running Android apps?

Answer: No, Google is a set of services that run independently from Google Play applications. Google services like Gmail and Google Calendar may not get updates or you may not be able to use a specific function of the same if any service stops working.

Question: How can I troubleshoot an issue on my Android device?

Answer: The online tech support assistants can help you if a problem arises on your Android device, though it solely depends on the brand and model of the device you’re using.

That’s all! Now you’ve learned how to check for the Android Version in Smartphones. If you’re still unable to find it, feel free to drop us a comment.

What Is Mobile Application?