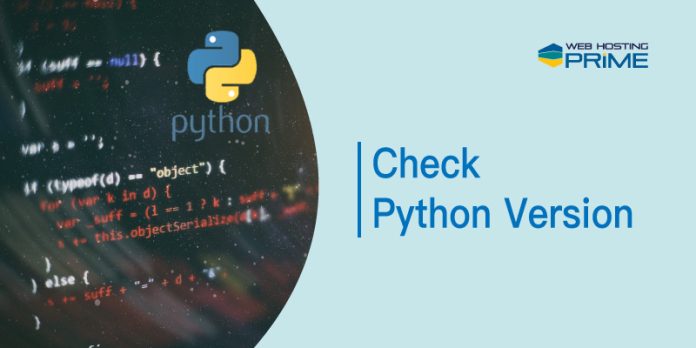 In addition to this, Python has different versions and packages which a developer needs to download for their project. For beginners, it might be difficult to find out the correct version of Python that can meet their requirements, but that’s what we are here for. Today we are going to discuss here some methods to find the right version of Python as per your requirements. Keep in mind there are three different operating systems on which Python works, so you can’t interchange the method of finding the Python version from one OS to the other. So, if you are using Windows, make sure you read out how to check the Python version in Windows only.

Python was initially started as a hobby by Monty Python, but with time and upgrades, the language has become one of the most popular and widely used programming languages worldwide. In addition to web application and software development, Python language is also used for data analytics, machine learning, and designing.

Python is an object-oriented programming language that was first launched in 1992; the main motive of creating this programming language is to make writing code relatively more intuitive and understandable to the general audience. Moreover, Python has become an ideal coding language for those people who want to have rapid development of their projects. Right now, companies like Google, Netflix, Spotify, and others are using Python as their core programming language. Furthermore, even NASA is using it for research and development.

One of the biggest benefits of Python is its English-like text syntax, which is quite hard to find in a high-level programming language. This makes it easier for the newcomers to understand the codes that are written by someone else. You will be amazed to see how quickly one can learn the Python language. Therefore, a lot of universities include it in their programming languages curriculum. Moreover, you need fewer lines of code to perform the same task in comparison to the other programming languages like C/C++ and Java.

Python, as we said earlier, requires you to have fewer lines of code, which makes it a better productive language. Due to its simplicity, a developer can focus on solving the problems rather than remembering the syntax to write the code. Thus, a developer gets to write less code and get more things done at the same time. Likewise, due to Python’s flexibility, it is easy to create exploratory data analysis as it allows developers to use different paradigms of programming to adopt the features of functional programming language.

There is no monthly subscription fee that you need to pay for the usage of thousands of Python packages as it’s an open-source language. Besides this, Python has one of the largest and most active communities in the world. Thus, if you are stuck somewhere in your code, you can easily find tutorials on how to get around the problem and continue with your project. Right now, the Python community consists of some of the best programming minds from across the globe, and they are contributing to the public forums to help young programmers make this language more stable and optimized.

4. A Plethora of Libraries

In a programming language, a library is a group of non-volatile resources which are used by developers to create a program. When you are using Python, you get tons of libraries that are at your disposal. You can use it as it is, or you can even make changes in them, so it fits perfectly with your program.

There is no way you can estimate when you are going to see a user surgeon in your web-based application, which makes scalability your top priority. That’s why before you start developing a program, it is necessary to choose your core language wisely. Python is currently used in some of the most ambitious web projects like YouTube, Reddit, EVE Online, and more. All of these projects were able to quickly scale up their resources according to the demands because of Python’s ability to add new resources, packages, and libraries in an instant without losing reliability. In the end, you can quickly review your code anytime with ease as the code is quite simple to understand.

Features of the Latest Version of Python

Given below are the latest added features in Python 3.9.6 version:

What Does Your Python Version Signify?

Now let’s move on to finding the Python version in Linux, there are several methods to find out the Python version, and we are going to show you some of the fastest and easiest ways to get the required information. Before we start, there are a few things which you need to know. Some of the most popular Python versions are Python 2.7x and Python 3.7x. Here ‘x’ denotes the revisions which took place or the minor changes that came out with the version.

When you are looking at the version of Python, you will see it consists of three digits which denotes:

In truth, most of the major releases will have compatibility issues, and that’s where minor releases help in resolving those issues. For example, Python version 3.1.1 means a new major version of Python. On the other hand, if the Python version reads 3.6.2, it means it has some minor version upgrades along with the addition of micro version patches.

Steps to Find Out Python Version in Linux

Step 1: If you are downloading the latest version of Linux, you will be getting Python pre-installed with your operating system. To check the Python version, you need to open the terminal and write the following command:

Step 2: This two-word command is enough to tell you the exact version of Python installed in your operating system. In case you are not satisfied with the version you are using, you can always install or upgrade to a newer version of Python by typing in these commands:

Step 3: In some projects, you might need a specific version of Python to work with other programs. Thus, you have to install more than two versions of Python in the same operating system. You can use the following commands to update your python versions individually:

Step 4: By default, if we are updating the Python 3 version, it will point out the upgrade to Python 3.6. But if we want to execute Python 3.7, we need to use the following command:

Once you type in the above-given command, you will have the output which shows the available options for an update. From here, you need to choose the number which is written alongside the version. Type the number and hit the ‘Enter’ key to install that version.

Just like Linux, in macOS, Python might be already installed, so all you have to do is find which Python version your operating system is running. To check the version of Python, you need to go to the Applications > Utilities, and then click on Terminal (Also, you can press command-spacebar and type terminal and then press the ‘Enter’ key.)

We need to use the same command which we have used in Linux to find out the Python version, and that is:

Ways to Find Out Python Version in Windows

To find out the Python version in Windows, you first need to open the command line or Powershell. After that, type in the following command:

There is one more method to find out the Python version on Windows, and that is when you are running the script. To do so, type in the following command in the command prompt:

If you want to use a specific version of Python, you need to install Chocolatey on your system. Chocolatey is a command-line tool that helps manage software packages on Windows and makes it possible for users to update their software programs, and manage its dependencies. If you don’t have Chocolatey, you can install it via this (link).

Once Chocolatey is installed on your system, you need to type in the following command to update the Python version:

These were some of the easiest methods by which you can check your Python version in Windows, macOS, and Linux operating systems. We have also provided you links and the commands which can be used to update the Python version. Now it all depends on your requirement, whether you want to work with the older version of Python or download the latest version.

Before we sign off, we would like to make it clear that using the stable version of Python is always better than using the latest version to minimize the chances of errors and crashing in the middle of compilation. Therefore, make sure that you know your project requirements well before upgrading your Python version. Wishing you productive coding!

How to Screenshot on Windows