HomeLinuxHow to Copy Files and Directories in Linux
Linux 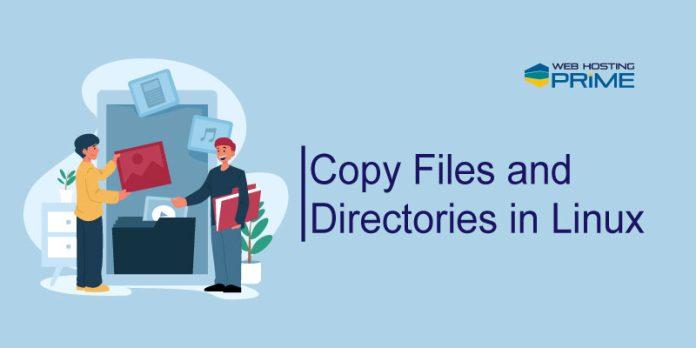 If you have ever worked on a computer, you know one of the essential things of computing is the ability to move a file from one location to the other. Nowadays online media streaming is quite popular, but earlier people used to download movies, songs, and other items on their computers. Once downloaded, the media files were moved to external devices such as USB or DVD drives to save space on the computer. Moving files in the operating system is one of the most basic tasks that everyone needs to know.

Is Copying Files in Linux Different from Windows?

The process of copying files in Linux is similar to that in Windows OS. The only difference in Linux is that you can enter the commands to perform the task without even opening the file or the folder that you want to move. In addition to this, with simple commands in Linux, you will be able to create system-wide backups or filter out the specific files that you want to copy.

Things to Know Before Proceeding Further

As a Linux user, you need to keep in mind that all the commands only work in the command line i.e. the terminal of the Linux OS. There are two methods of launching the terminal in Linux. First, you can use the graphical interface to launch the terminal. It will be located on your main screen just like an application icon.

Difference Between Files and Directories

All the data that you store in your computer is present in two forms, that is, file and folder. The main difference between the file and the directory is that the file stores data in them whereas the directory (folder) is a collection of files stored as a group. A file could be of any type. It could be a text file, an mp3 file, or mp4 depending on the format in which you have saved it. On the other hand, the directories (folders) are used to keep your files organized in your system.

A directory stores files in itself, and without the presence of files, it virtually occupies no space. In comparison to this, a single file depending on its content can range from kilobytes (KB) to gigabytes (GB). Lastly, directories are present in a single format, you can change their name, but the format will remain the same.

Now let’s take an example of the cp command and explain it.

In the above command, we are creating a copy of my_testfile.txt and also renaming it with the new file name my_testfile2.txt.

One thing you need to keep in mind when performing the copying task using cp is that when you are using cp, it by default runs in the same directory which is currently opened. But there can’t be two files of the same name and format in a single directory. Thus, you need to change the name of the target file of which you are making the copy in the same directory. To highlight the difference in the name of files, you can use any method that you like. For example, you can add mytestfile_new.text to the new file which you are creating using the cp command. In the above example, we have denoted the change in the file name by adding numbers such as my_testfile2.txt.

Note: You are going to receive a warning message when you are changing the file or overwriting it, so be careful about the changes you make. For a better understanding of the cp command, know about the different options which you can use with it. To find the options for any command in Linux, you need to type in -i after writing the command in the command line.

The options given below can be used with the cp command to perform various tasks along with copying and storing the file to another location.

Copying File to Another Directory Using the cp Command in Linux

To copy the file from the directory in which you are currently present to the other directory location, you need to use the following command:

When you are copying the file to a new directory, you don’t have to change the name of the file as there is no other file with the same name present in the target directory. Moreover, if the file is located in some other folder or path, then you need to provide the path of the source file from where the command will copy it to the newer location. Use the following command format to give the location of the source file:

Also, to give a new name to the file which you are copying to a different path, you need to use the following command:

The cp command allows users to copy multiple files with a single command. To do this, you need to specify the name of the source files along with their destination directories written at the end of the command.

When you use the cp command, the destination you type has to be a directory. One of the great things about using the cp command is that it allows users to copy the files using pattern matching.

Let’s take an example to show what pattern matching means. Suppose you want to copy all the screenshots present in one directory. But in the same directory, there are both text and pdf files present as well. Surely, their names are different, but it is hard for you to write down all the names of the screenshot files as they are presented in numeric format. In this case, you can use the following command:

This command will match all the files present in the current directory, which has .png in their name and copy it to the /backup directory.

If you want to copy a directory from one location to another and include all the files and sub-directories present in the source directory. Then you need to use the -R or -r option of the cp command. Let’s take an example to show you the use of these two options in moving the directory in Linux. In our example, we are copying the screenshots_directory to screenshot_backup using the following command:

Using the rsync Command to Copy Files and Directories in Linux

The resync command-line utility does allow users to copy the files and directories from one path to the other. But the command doesn’t copy the file, it synchronizes the source file that you want to copy between the two locations. It can be used to copy the files to both local and remote locations. There are tons of options that can help a user to control the behavior of rsync commands.

To copy the single file from the source directory to the new location, you need to use the following command:

We use -a option with rsync as it will help us in copying the files recursively, block devices, and preserve all the symbolic links which are present in the file such as modification times, group ownership, and other permissions. In case the files are already present in the destination directory, then the rsync command will overwrite it.

So these were the methods to copy files and folders/directories from one source to another in a Linux system. We would recommend you to stick with the cp command for copying both files and directories. The rsync command can also be used for copying files, but we won’t recommend it as this command was not intended to perform copying. However, it’s up to you to make your decision, choose whichever command fulfills your requirements and copy your files in a hassle-free manner.