Home Computer How to Record Screen? 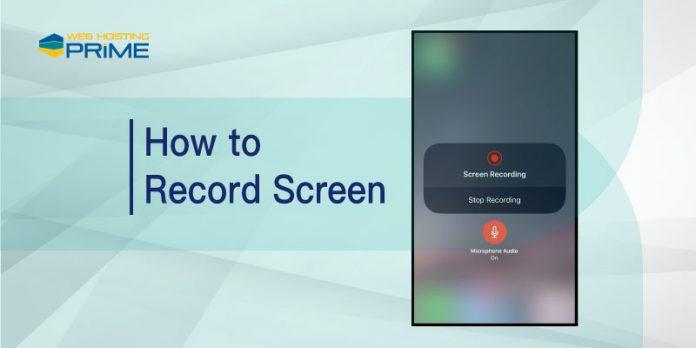 Are you looking to record your computer’s screen for creating presentations at work or making how-to videos and upload them to YouTube?  If yes, then achieving the same is quite easy since Windows 10, macOS, and Chrome OS come with pre-built tools that allow you to record your screen effectively.

In this post, we will be discussing some of the most efficient ways for recording the screen of your PC. So, without wasting any time, let’s get started.

Windows 10 comes with Xbox Game Bar, which is an in-built tool for recording screens, but it is preliminarily focused on gamers. However, it can be utilized to record your screen for other purposes as well. Here’s how you can use Xbox Game Bar to record screen:

Click on the start button and further navigate to setting options and open it. Alternatively, you can also proceed by clicking on the notifications icon in the taskbar and opening the settings.

Now choose the “Gaming” option and the “Xbox Game Bar” option will appear by default. To proceed further, you need to switch the toggle on the right for giving permissions for recording videos.

From the left menu, go under the “captures” option and modify the locations for saving future recordings and screenshots if you want to. You can also make other necessary configurations as well such as setting up the maximum recording length and adjusting the quality of audio and video. To open the Xbox Game Bar, you can use the keyboard shortcut “Ctrl+G”.

You might see a prompt question whether or not the opened application is a game or not. Proceed by saying ‘yes‘ even if you’re opening any other application. However, this recording feature is restricted to open applications only and you can’t record on the browser or applications.

The game bar will appear on the top-center of your screen and it will have few buttons for accessing the overlays and settings of widgets, audio, capture, etc. Typically, this option appears by default and if it’s not appearing, click on the webcam icon.

For beginning the recording process, click on the “start recording” button. Alternatively, press the Windows + Alt + R key combination for starting or stopping the screen recording.

The process of recording screens via PowerPoint is relatively simple and requires you to install the Microsoft PowerPoint application with Microsoft 365 subscription. The online version will not work in this case. Here are the steps that you need to follow for recording your screen with PowerPoint:

Open the PowerPoint on your system and click on the “Insert” button located in the top menu bar. There, you’ll get the Screen Recording button placed near the Media panel in the top right area. Click on the option to start recording the screen.

PowerPoint gives users the ability to select a particular area of the screen that they need to record via the “Select Area” button. Else, users can press the Windows+Shift+F button to start recording the full screen. For stopping the screen record, click on the pause button or click on the square button for ending the recording.

For saving the recorded content, right-click on the video and select the option “Save As” given in the pop-up menu. You can save the video to a directory of your choice. However, you may not get many editing and control options. PowerPoint is a good option for recording your screen quickly.

macOS comes with a native feature Catalina that enables individuals to record screens and take screenshots easily without the need for any third-party applications. Following are the easy steps that will allow you to record your screen:

To get started, press Shift+Command+5 for opening the toolbar with two distinct sets of buttons. Three buttons available on the left are for capturing screenshots and two present in the middle are for recording the screen.

Right after completing the recording, you can click on the ‘record button which is present on the menu bar for saving the video on the desktop. Else, press the Command+Control+E key combination to achieve the same.

A prompt will appear asking for the permissions to record your computer’s screen. Now, click on the Open System Preferences and tick the checkbox asking to allow QuickTime Player to record your screen. Restart your QuickStart player to apply the changes.

The tool will come with two different sets of buttons: Three for capturing screenshots and two for recording the screen. From there, click on the “options” icon to make basic changes such as disabling mouse clicks, using microphones, setting up storage location, etc.

You will have the option to either record the complete screen or record a selected portion only. Either of the two options will be available on the right side of the screen. And for stopping the recording, click on the stop recording button.

For saving the video, click on the File option present in the menu bar and then click on the ‘save’ option from the drop-down menu. Now select the location and give your recording a name and click on the Save button.

Google has its own tool for screen recording known as Chrome OS 88 that can only be activated by enabling two flags. Right after making the configurations, a screen-recording button will appear on the screen.

However, if you don’t want to enable any flag and want to try an alternative way, you can opt for the multiplatform option that is enabled with the help of the chrome extension. Follow the steps mentioned below to enable the same:

To get started, open Chrome and enter chrome://flags in the search bar. Turn on the Screen Capture Test flag followed by restarting your Chromebook. After logging into the computer again, choose the option for the Screen Capture button that appeared on the popup menu.

Your screen will have a toolbar placed at the bottom, from there you can also choose to record the partial screen only with the help of a mouse. Enclose the area of the screen you want to capture. You can also opt for recording the entire screen as well.

This tool will be configured for taking screenshots by default. Therefore, you first have to open the menu and then click on the screen recording option. For finishing the record, press the stop screen recording button displayed next to the system’s clock.

At any time of your personal or professional career, you’ll face a point where you have to record a screen for various valid reasons. To do so, you can take the help of various third-party tools, but that’s not a good idea because nearly every OS provides a built-in tool to record the screen efficiently.

The blog contains a step-by-step guide for performing the same without spending even a single penny on paid third-party screen capturing tools.