Home Server How to Setup a Minecraft Server on Windows 10? 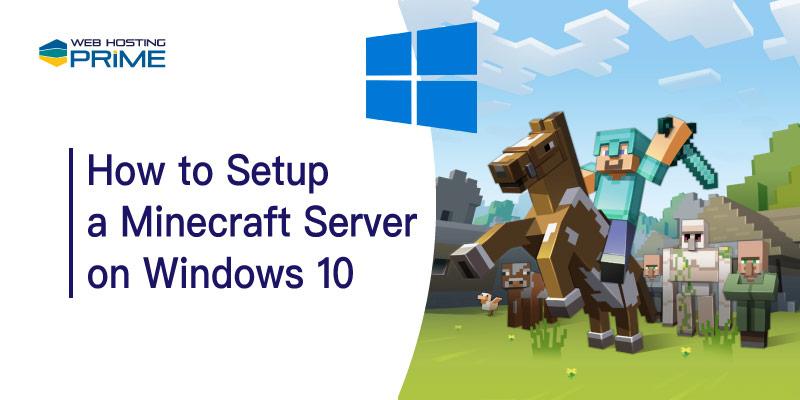 Due to various valid reasons and the diversity of game modes Minecraft offers, it is a deserving winner of all the popularity it has been experiencing for the past decade. Allowing players to have robust flexibility, enables them to choose among various game modes such as an eclectic mix of worlds, with the features from Player v/s Player battles to role-playing and economy-building servers. However, to play Minecraft with a group of individuals, it is mandatory to have a Minecraft server because it allows multiple players to connect and play together.

The server works as a host for the Minecraft game and allows several individuals to play collectively. For beginners, the idea of setting up a Minecraft server by themselves may seem complex. However, in reality, it is an easy and straightforward process. Along with bringing tons of benefits to players, self-hosting is also claimed to be pocket-friendly that requires very minimal resources.

The blog is a step-by-step guide to learn how to set up a free Minecraft server on Windows 10. But before that, let’s talk about Minecraft in detail.

It is an online game in which players build and break different types of blocks in a three-dimensional world. This game has no specific set of rules for users and doesn’t restrict players with any set of instructions or objectives, therefore, every individual in the game can build and explore anything. Since all of the players are provided with huge flexibility, they are allowed to recreate a world full of fantasies or battles with enemies to seek adventure along with the option to either play alone or with friends.

Majorly, the game is classified into two modes, Survival and Creative. In Survival mode, every individual has to survive and scavenge for finding necessities such as food. This model also contains mobs or moving creatures, typically creepers and zombies that will harm the gameplay. However, the Creative mode allows players to be creative and build or break blocks as per the need and they don’t have to fight for food to survive.

Minecraft can be played on various devices such as computers, smartphones, tablets, Xbox, Nintendo, and even Playstation. Most of its audience is composed of primary-age children.

Reasons to Set up a Minecraft Server on Windows 10

Since you’ll be the sole owner for having control over all of the servers you create, there will be lesser or no security or privacy issues hampering the game. The administrator can also control the settings of players in the game and unlike third-party hosting, chances of hacking or frequent interruptions will become lower. In simple words, the control will be completely in the hands of the admin.

There are various modifications available over the internet in the form of plugins that can be used for improving the gameplay, character appearance, weapons, and tools, along with adding advanced features. Using a personal Minecraft server will eventually improve the player’s experience and also allows users to set up plugins and mods with a single click.

Since you’ll be creating a whole new server, a lot of new people from all around the globe can join you in the game that will eventually form a community. Further, you work on growing this community and creating a large user base for future usage. Many of such servers that have achieved milestones also get featured in gaming and tech news outlets.

A person from any age group can play Minecraft, including small kids. Creating servers is a legitimate way to help children learn how to create servers and control them as administrators. Moreover, they’ll be able to learn some basic Linux commands for customizing Minecraft servers. A personal Minecraft server also allows parents to monitor their children’s activity and ensure that they’re in a safe multiplayer environment.

Setting Up Minecraft Server on Windows 10

Before proceeding, make sure that your computer or laptop meets the basic requirements for creating a Minecraft server:

As the player community increases, you need to keep on updating the resources as well for eliminating issues such as lagging and unwanted breaks. Also, for increased performance, improved RAM and a powerful CPU will surely help in meeting the requirements.

Now, let’s take a look at the steps that you need to follow for setting up a Minecraft server:

1. Install the Minecraft Java Edition along with the latest Java version

First and foremost, users have to get the Minecraft Java Edition, which can be downloaded from the official website of Minecraft. Also, install the most recent version of Java because Minecraft requires Java to run. Installing the latest version will enable users to play without any issues and lesser bugs. For installing the latest version of java, click here and proceed further by selecting the “Agree and Start Free Download” button.

Now, its setup file will get saved on the “downloads” folder on your computer. You can directly search for this on your desktop or open the downloads folder. From there, run the JavaSetup executable file and proceed with the installation by agreeing to all the terms and conditions that will pop up on your screen.

Now, the next step is to download the Minecraft server as the Server.jar file which is available on the official Minecraft website. From there, click on the “Download Minecraft server” jar link and agree on the permissions displayed on the screen of your PC that states “this type of file can harm your PC”. This notification pops up because any .jar file is recognized as a harmful or suspicious element by Operating Systems if they’re being downloaded from browsers.

Before running the .jar file, create a folder to centrally place all the Minecraft-related files for accessing all of them easily. Proceed further by right-clicking and copying the Server.jar file and paste it into the new folder you just created.

Now you can run the server.jar file by double-clicking on it. This will download more files that are required for creating the Minecraft server. After the process ends, your personal Minecraft server will be launched and good to go. If other players are under the same internet connection, they’ll be able to discover your server in the multiplayer tab and can join it.

3. Commands for running the Minecraft server

For the server to run smoothly without any lags, it is required for users to build a batch file. Start by creating a new text document and save it as a .bat file on your computer. For this, you just have to right-click and create a new document. After renaming for identification, open the document and include the texts mentioned below for running the server smoothly.

Keep in mind that if the name of the jar file in your system is not server.jar, then you have to put the exact name of the file here. Now save this file because it will be changed from a batch file instead of a text document in the future.

4. Setting the properties for servers

You can modify the server properties and customize them according to the Minecraft game you’re wishing to play with your friends. For this, start by opening the server properties file. There you will find various text sections. Following are some of the most important texts that can be modified for manipulating the game settings:

This is an optional step that requires an individual to forward ports for allowing players from anywhere in the world. This means that players don’t necessarily have to be under the same local connection. Keep in mind that forwarding ports might end up providing more security and risks so ensure to do this step attentively.

Port forwarding varies for different routers, therefore, there is no one-size-fits-all instruction. Therefore, check the official website and documentation of your service provider and check the steps for port forwarding, or you can directly contact customer support and ask for the specific port address used for Minecraft servers.

6. Connecting with the Minecraft Server

Here’s the final step that requires running the batch file and launching it on the server. Open your Minecraft launch page and ensure to load the version that matches the jar file that you’ve downloaded. It is suggested to launch the version on a server that is available 27*7. And for this, navigate yourself to the Installations tab hit the +New button. Here, assign the installation with the name of the server and version number of Minecraft and select the version as the release number and click on “finish installation”:

After completing all these steps, you’ll be able to see your server trying to connect. If a green connection bar appears with open spots for connecting with your server, it means that that your server is up and running and you can now launch your Minecraft game.

Along with its huge popularity, Minecraft is a game that offers great experiences to players of all age groups. It comes in two different modes for a completely unique gaming experience. To play this game with better features, modifications, and most importantly, with your friends, it is suggested for you to create your own Minecraft server.

A Minecraft server offers various benefits such as improved security and privacy, better control over mods and plugins, and also allows you to play with lots of other online players. We have mentioned a step-by-step guide above to help you set up a Minecraft server on Windows 10.