Home Computer How to Turn Your Computer Into a DLNA Media Server? 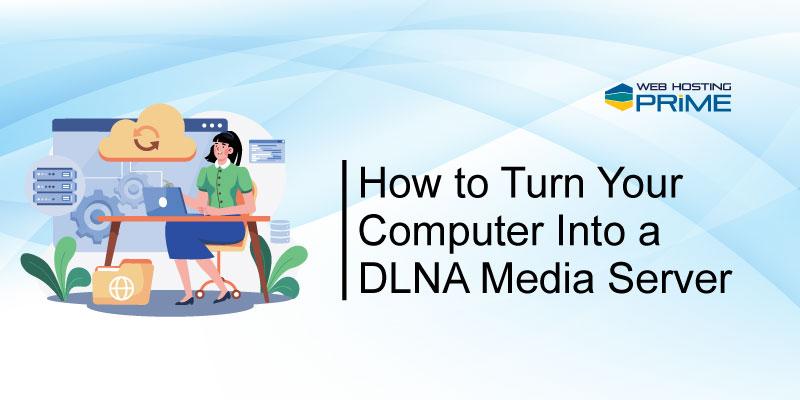 If you have multiple devices at home and you want to watch movies, you’ll probably choose the device with the biggest screen, which in most cases is a smart TV. However, if your TV does not store the movies due to a reason like lack of internal storage space, you will have to play the movie from a storage device such as a pen drive. But it does not have to happen this way. The DLNA media server can give you access to your media library digitally and remotely. With a DLNA media server, you can easily share photos and videos across devices.

How to Turn Your Computer Into a DLNA Media Server?

In this post, we are going to talk about how to turn your computer into a DLNA media server. We will discuss two simple methods step-by-step so that you can easily follow them.

If you use Roku, PlayStation 4, Xbox One, etc., they may offer DLNA (Digital Living Network Alliance) connection. Even some smart TVs have DLNA support by default. If you want to stream videos or photos on your TV from a laptop, you need to set up the DLNA server on your laptop first. This will make it possible for you to organize the content and cast it on your TV.

There is a “Media streaming option” on Windows and since it does not mention DLNA in its name, it’s quite common to confuse and ignore this option. However, you need to understand that it is a DLNA-compliant media server. Follow the steps below to learn how to enable Windows built-in DLNA media server:

Step 2: Type “media” in the search bar present on the right side of the control panel screen.

Step 3: Some results will appear. From there, click on the first option under the Network and Sharing Center, click on “Media streaming options”.

Now, if you want, you can customize the streaming settings. Even if you configure the settings, you can access the media files on your media library across all the devices that are linked with the same home network. This option is good when you are using a home network and you trust the devices that are connected with the network. Otherwise, you can customize the devices. Here is how to choose your device to stream content from your computer through a media server.

Step 1: Right after the “turn on media streaming” option, you will be prompted to a page. Here you will see the devices connected to your local network.

Step 3: Click on the OK button which is at the bottom of the screen.

Step 5: Click on the Stream pull-down menu from the top left of the window.

However, you cannot choose the files to play from this window. To do that, you will have to organize the media and their folders on your own. The media streaming service is going to depend on your Windows libraries. For example, if you want to stream videos, you add the videos to the Videos folder. If you want to view pictures, you add them to the pictures folder, and so on.

You can add new folders to your Windows media library. The process is the same for Windows 7, 8, and 10. The folders you add and the content within them will be visible to other devices that you are streaming from. When you access the DLNA media player on another device on which you want to play the videos, you can do that easily. For example, you can easily stream the content to Roku or Xbox as they come with an in-built DLNA media.

Step 2: Download the Plex software on your computer. Plex is available for Windows, macOS, and Linux.

Step 3: Install the Plex software package on your computer.

Step 4: Launch the application, and you are ready to go.

Devices like Roku, Xbox, and some smart TVs come with the DLNA feature by default. So, you don’t have to install the server in them. When you try to connect your computer with such a device, the connection between them will be established instantly.

How to Stream Media from Another Device Through DLNA Server?

Regardless of the device you use, the process of streaming media files is simple and straightforward. Also, if you keep your media files organized on your computer, it will help you stream the content even more easily. All you have to do is put the pictures in the Pictures folder, songs in the Music folder, movies in the Videos folder, and so on.

The organizing process will allow the media server application to find different content easily. But if your media is stored in a hard drive, you will have to connect it to your computer before streaming it on another device.

Generally, when you install the media server app, it starts up automatically. And from its dashboard, you can quickly connect the device to a computer to access it. For example, you need to open the Media Player app on your Xbox One device and wait for a few minutes until the name of your media gallery appears on your Xbox media player.

The media server feature in Windows computers is DLNA certified. It indicates that the devices with an in-built DLNA server can communicate with your Windows computer. A playback or a client app works as the communication bridge between the two devices. But not all playback applications are compatible with every device. You will have to check the instructions of your streaming device regarding media servers before downloading a client app.

Connecting your devices through a DLNA server is the best way to remotely access photos/videos/music stored on a device. However, there are other ways to access files, such as cloud syncing. Still, DLNA media servers are better and more effective.