Home Networking How to Use SFTP to Securely Transfer Files with a Remote Server? 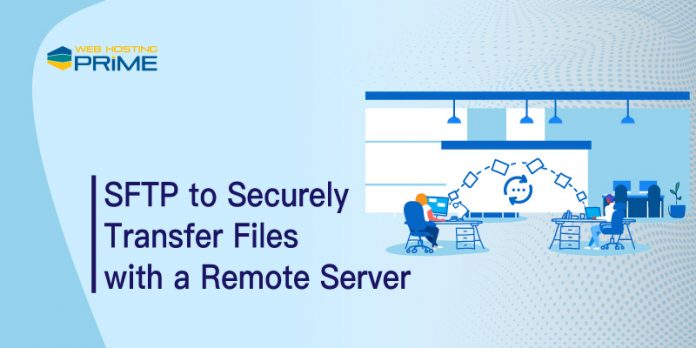 FTP is the standard protocol for transferring files or data from one computer to another. But the question that arises here is that does FTP guarantee that it will transfer the files to the intended device without any failure? Well, while using FTP for file transfer, there is a chance that your files can land in the hands of malicious actors. But when it is about SFTP or SSH File Transfer Protocol, you can be sure of the security of your files while they are being transferred to a remote machine.

In this post, we are going to talk about how to use SFTP to transfer files securely and what exactly this protocol exactly means? So, keep reading the post to discover the basics of SFTP and its work methods.

What Does SFTP Mean?

SFTP is a standard protocol that lets you transfer, access, and manage files and data on a remote computer through the remote server. SFTP protocol has the same purpose of transferring files and data as FTP, but it is a better alternative as it ensures better security. SFTP refers to SSH File Transfer Protocol where SSH represents a cryptographic protocol that connects the server and client computers securely.

SSH encryption secures the data that is being transferred and ensures that it can’t be intercepted by malicious actors. SFTP comes with several benefits that FTP doesn’t have. Here are some of the key benefits of SFTP that you need to know:

How Does the SSH File Transfer Protocol Work?

FTP is used to transfer files using plain, human-readable texts, which makes it easy for malicious actors to steal the information. But when it comes to the SFTP, it uses the SSH protocol to encrypt data so that any third party cannot access the data. Even though SFTP was built on the existing FTP, this one feature has made a whole lot of differences between the two protocols. Due to the SSH encryption, anyone who tries to see through the data transformation won’t understand the information. All they will see is unreadable data or bits and bytes.

SSH encryption requires different user authentication methods to secure the data. It includes a username, password, and an SSH key. We will talk about this in detail in the later sections.

Ways to Set Up the SFTP Server

You can set up an SFTP server in two different ways— either you can build your own SFTP server or use a managed cloud service. Now, let’s talk about both of them.

If you have a Linux machine, you can use it to set up your own SFTP server. For that, you will have to create users and set their passwords. You will have to add SSH keys to help the users authenticate the connections. Once the users verify their details, you can assign them directories and permissions of the data. Also, you can create additional network rules that will enhance the security of the server.

You can configure the data, back up the data, and monitor it. But if you want to set up an SFTP server on your Windows computer, you will have to use a third-party tool such as WinSCP or Filezilla SFTP Server. SFTP is not available by default on Windows machines. But you can also skip all these hassles of setting up an SFTP server by switching to a cloud-based service.

Different cloud-based services come with different features and pricing plans. You can use the AWS Transfer for SFTP, which is the most popular option. AWS uses the Amazon S3 protocol to let you access files.

How to Create SSH Keys?

SFTP supports the SSH authentication methods because the two are related as the SFTP is a subsystem of the SSH. You can create usernames and set up passwords for authentication. But creating SSH keys will help the users log in to the portal without any password. The users will need to have a copy of the valid SSH keys to access the SFTP server.

First enter the terminal then type-

For security purposes, the key is protected with a strong password. The password protects the key, and you can use the SSH agent to cache the password. Now, copy the key to the remote host:

To make sure we haven’t added extra keys that you weren’t expecting, log in to the remote server with SSH and check if the connection is okay:

Then exit and connect to the server with this:

Commands For Getting Information About the Environment

There are some commands that you can use to learn about the conditions of the SSH connection.

SFTP will use TCP port 22 for communication, and using the -P flag will help you to change the port number:

Enter a suitable sftp command in the terminal window to initialize the connection. When done, the server itself will ask you to provide the credentials. After providing your username and password, it will show you a welcome message:

But if you don’t want to provide the password every time, the SSH keys will help you to log in to the server, and it will authenticate automatically.

Learn About the Help Command in SFTP

If you want to access the summary of SFTP help, use the command help. Use either of these:

You will find a list of all the available commands:

That’s how you use SFTP to securely transfer files with a remote server. However, creating SSH keys is the most important part of transferring files using SFTP. If you found this guide to be helpful, do check out our other articles as well. Or, if you have any questions regarding the SFTP connection, feel free to leave us a comment below.