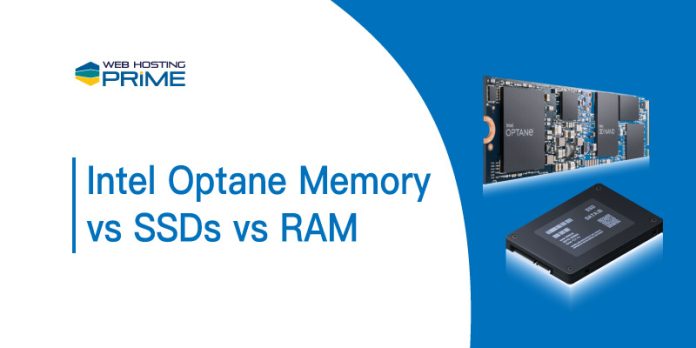 Even though raised as a memory that is faster than RAM, its goal is not to completely replace RAM, which you already have in your laptop. In addition to your RAM for running your laptop, you’ll still be able to keep all your databases on your SSD. The Intel Optane Memory will be used in the space between the two.

Difference Between RAM VS SSD VS Intel Optane Memory

Intel Optane Memory differs from the solid-state drive (SSD) and random access memory (RAM) in the sense that the SSD contains all of the storage space available on your laptop. On the other hand, RAM only has random access memory (RAM). RAM is the memory that is immediately accessible in a laptop, and Intel Optane Memory bridges the gap between SSDs and RAMs, making things much simpler and faster.

When you run a program, the data is transferred from your SSD to your memory. By remembering your most used programs and keeping them available, Intel Optane allows for faster read and write speeds.

There are three different types of laptop hardware, and this is the most straightforward way to describe the differences between them.

When Intel announced that they would be releasing their Optane Memory in the second half of 2017, it was still in its infancy compared to the other forms of memory available at that time.

Intel Optane Memory is intended to be less expensive than standard memory while also being significantly faster than SSD storage.

What is Intel Optane Memory?

First and foremost, you must understand how your laptop operates to fully comprehend Intel Optane Memory.

Laptops have their own storage – nowadays, this is typically an SSD, which is the most widely used type of storage technology. The available storage space may be 256GB, for instance.

When you execute a program on your computer, the data from the program must be transmitted from one’s storage to one’s memory, which is referred to as your random access memory (RAM). The amount of RAM available to you determines the number of programs that can be run simultaneously on your computer.

Your device will begin to underperform if you attempt to run a large number of programs simultaneously while only having a limited amount of RAM available on your system. It will start to struggle and become more sluggish, which will frequently result in long loading times and poor overall performance. It’s here where Optane Memory comes in handy.

It is a form of additional memory that your processor can access to run the programs on your laptop computer in its most basic form, as described above. Rather than having to interact with the storage and RAM processes simultaneously, Intel Optane Memory serves as a liaison between the storage and memory processes.

It is beneficial when you want to make things move a little more quickly. It makes use of 3D Xpoint technology, which has been specifically developed to be both faster and more durable than previous generations. In terms of capacity, Intel Optane memory is available in two different sizes: 16GB and 32GB. The amount of memory available is typically greater than the amount of RAM available on your laptop or computer.

You’ll frequently see a laptop with 256GB of storage space and 32GB of Intel Optane Memory – this is because this is the maximum amount of memory that can be crammed into a small space on the bridge between the two storage devices.

So, Intel Optane Memory is different from traditional RAM in a way that it is a form of flash memory, which means that your data is preserved even if you turn your laptop off. It can also reduce load times by utilizing a form of cache memory, which increases efficiency.

It is one of the most crucial factors that influence how well your computer will perform. Random-access memory (RAM), also known as memory, is a small piece of memory used to store data. It’s commonly referred to as the “power of your laptop,” and this is because it is the hub of virtually everything that happens on your system.

When you start a program, it moves from your storage to your random access memory (RAM). RAM is vital for the simple reason that finding a program in your storage space would be more difficult for your laptop, and the software would pack at a markedly slower rate if it is non-performing.

In contrast, when you begin a development program, the software is moved from the storage area to the random access memory space (RAM). The laptop will access the program much more efficiently, and the program will run much more smoothly due to the presence of RAM.

Have you ever had your laptop crash because you were using Photoshop, the Chrome browser, and a few other programs simultaneously? Indeed, you would not have gotten into trouble if you had more RAM. 8GB of RAM should be enough for most people, but if you plan to do a lot of gaming or video editing, you may want more RAM.

RAM, in contrast to solid-state drives, is a volatile form of storage. Power is required for this type of memory to store your data, and when you turn it off, all of your data will be erased. One of the primary advantages of Intel Optane Memory is that it is nonvolatile, which means that your data will remain in your laptop’s memory even when the computer is turned off.

SSD storage is more commonly used these days as compared to RAM because, like Intel Optane memory, it retains all of your data, programs, and files even when the computer is turned off or unplugged.

What is an SSD?

Nowadays, solid-state drives (SSDs) are being used in laptops, at the same time many people are still unfamiliar with SSDs. SSDs are the amount of storage space available on your computer’s hard drive (in the past, we may have referred to storage as memory, which is why this gets confusing).

Hard disc drives, also known as HDDs, were widely used a decade or two ago. However, as technology progresses, the hardware that we use in our laptops also advances. A solid-state drive (SSD) is included in almost all new laptops, which handles the amount of storage accessible on your device as a result.

It can be as little as 128GB on some of the smallest storage devices or as much as 1TB (terabyte) on the largest storage devices for some gamers. Some gamers may choose to combine an SSD (solid-state drive) with an HDD (hard disk drive) to maximize their storage space while keeping costs down.

As we mentioned above SSD is a type of nonvolatile memory. This means that even if you turn off the computer, the storage technology used will retain your information (unlike RAM, where it gets cleared). Technically, a hard drive will eventually lose its data, but this will only happen after it has been turned off for an extended period (I’m talking years, not hours).

The only disadvantage of this type of storage is that it can be pretty expensive compared to hard disc drives (HDDs), but the benefit is that it is significantly faster. If you compare the performance of an SSD to that of Intel Optane Memory, the SSD is nowhere near as fast, which means your system will be less responsive and ultimately slower.

But, to put it another way, an SSD is simply the amount of total storage space you have on your gadget.

In summary, your laptop might be able to contain RAM, SSD storage, and Intel Optane memory. A computer cannot function without RAM and SSD storage, however, Intel Optane is an automatic memory that can drastically improve the overall performance of your laptop by making it run a lot faster and smoother than it otherwise would.

It’s similar to a gateway and can improve the responsiveness of your system and make things move faster. Video editors, gamers, and anyone else needing to run high-intensity programs will enjoy using it.