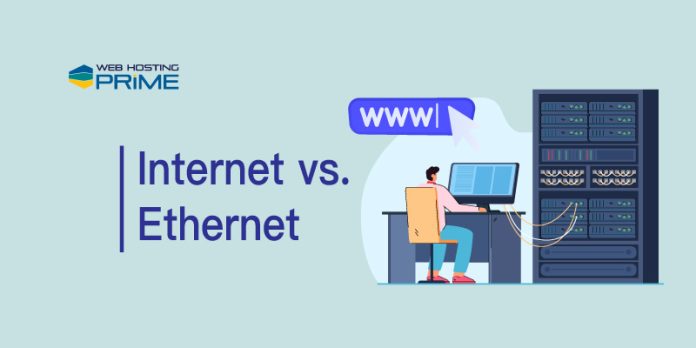 The world is growing towards digitalization. Every basic to advanced service, job, and work is done via computer networks. In earlier days, if you had to connect with someone sitting in another part of the globe, it would have been impossible. Well, at present, you can easily call, video call, and chat with anyone globally within a few seconds.

The Internet has connected the world and made it a small global village. Therefore, the demand for the Internet is increasing day by day. The world was not like what it has become today. The Internet has touched every aspect of life from socializing, shopping, playing, or overall how we live.

Very few people might know about the functions and usability of the Internet and Ethernet in detail. Thus, in this article, you would find a detailed comparison of both;

What is the Internet?

The Internet is a vast network of computer networks worldwide that connect people. To transfer the data and information, it utilizes TCP/IP protocols. Thus, this process helps the users share and exchange data quickly.

Simply put, the Internet works on the data exchanging system, and it also arranges file-sharing services like document sharing, the World Wide Web and email, PCs, and routers. All this sharing process is done between the devices connected on the Internet utilizing cables, wireless networks, or some advanced technology like fiber optics. The Internet is the most powerful way to communicate. Moreover, areas such as education, business, medicine, media, etc. are mainly dependent upon the Internet.

Advantages of the Internet

Ethernet offers a standard way of connecting computers to the network with a wired connection. Ethernet, with the help of wire connection, could assist in connecting various gadgets like computers and switches. Ethernet reachability is only up to a specific region or Local Area Networks (LAN). It uses frames to send the data. The frames, further, consist of source and location addresses or error recognition systems.

A standard Ethernet wire could be thicker than normal phone wires, and an RJ45 connector is connected at the end. Ethernet offers numerous standards and connection speeds. The 10BASE-T offers around 10Mbps, 100BASE-T delivers up to 100Mbps, and 1000BASE-T supports 1000Mbps. In simple words, if you connect a computer with 10BASE-T NIC associated with a 100BASE-T network, the computer will transfer or exchange the data at a speed of 10Mbps.

Key Differences between Internet and Ethernet

After knowing about the Internet and Ethernet, you must be curious to know the major differences between both. As the objective of both is to serve network connection, yet they both utilize different methods and factors to provide network connections to devices. Let’s understand it in detail.

Ethernet uses the cables to establish connections. The cables like coaxial or special twisted wires connect the supplier’s station to your computer or modem. There are specific connector ports on the computer network cards that connect the cables and establish the connection.

However, the Internet sets up the connections via wireless technology. As wireless, you are utilizing the Internet on your mobile devices.

Any external device can’t access your network on an Ethernet connection. Thus, it makes the Ethernet networks somewhat secure, as it is a local area network and the closest one. Hence, any third party or outsiders wouldn’t have access to the connection by any means. Accordingly, there are limitations to prevent unauthorized access to the network.

On the other hand, the Internet permits open and free access to every user with devices. Therefore, anyone can get access and compromise the data on the Internet. Thus, when connecting to the Internet, you should play it safe as you might open yourself to security threats like viruses and hackers.

As the Internet is the network of networks, thus it is more like a wide area network of numerous LANs. Thus, these connections are spread globally. Ethernet utilizes the LAN or local area network and mainly operates and offers services in a specific region.

As the local area network, Ethernet is mainly managed and controlled by the local body or single system administrations. Thus, they oversee and control the connection parts.

On the contrary, the Internet is excessively wide and spread across the world, and thus, it is too large to be controlled by any specific body. However, some organizations have access to arrange and deal with a few aspects of the Internet. But overall, no one can control the Internet.

Other Key Differences between the Internet and Ethernet

Apart from the above contrast between both the networks, some other key differences that differentiate the Internet and Ethernet as two unique aspects are:

Hope that now it must be clear to you about the Internet and Ethernet. Undoubtedly, both are extremely important and useful in their way with certain benefits. Although, the Internet is utilized in a bigger aspect, as it has more benefits and coverage worldwide than Ethernet. Yet if you need a wiring connection, Ethernet is no doubt a better option.

The Internet has established a permanent connection between individuals, companies, and organizations worldwide, and has also introduced other options, such as email, routers, switching and wireless networks, and many more. Further, people’s life and day-to-day activities have become simpler and easier. Things that seem to be next to impossible can now be done in seconds or minutes. At the same time, it depends on the coverage and the user’s preference for what he wants, as both have their limitations and advantages.