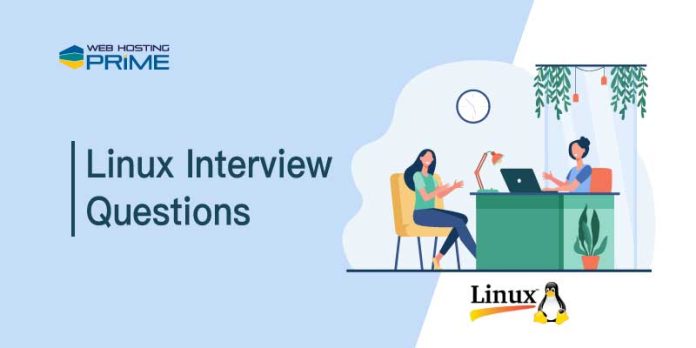 Of all the operating systems you have used, Linux is one of them and the most advanced one. It is open-sourced, free, and provides top-notch security to all the users. The Linux operating system typically manages the CPU, memory, and storage directly at the same time, ensuring a smooth connection between software and hardware. The Linux operating system was released in 1991, basically for computers, and since then has helped developers build numerous types of mobile apps, desktop apps, website tools, servers, and more. There are various types of Linux distributions that help you manage different types of application development, and that includes Ubuntu, Debian, and more. Now, if you are a newbie Linux application developer, then chances are you need to prepare yourself for an interview. And for that, you need to memorize at least the most basic questions about Linux. In this post, we are going to show you some of the most important questions interviewers ask their candidates.

1. What do you know about Linux?

Linux is known as an operating system like Windows, except more advanced and secure. This Unix-based OS is free, open-sourced, and does not require much memory to operate on your computer. Linux is also a non-proprietary operating system for most purposes.

2. What are the Basic Components of a Linux Distro?

In Linux, there are usually five components or elements, and they include the kernel, system library, system utility, hardware, and shell. The kernel is the main part of a Linux system that manages all the essential activities of the OS. The system library is used to implement the operating system’s features or functions. A system utility is a set of programs that manage specific levels of tasks, and hardware includes the CPU, mouse, etc. Shell refers to the command prompt or a text editor where you can execute commands.

3. Explain Kernel and Its Functions

A kernel is the core component of the Linux OS that works as a bridge between the hardware and software and manages resources. The kernel is a Linux machine that usually provides a user interface to make managing the desktop easier. The kernel is also the first program that loads when you start your Linux desktop.

Again, Bourne The shell is known as the BASH interpreter because it interprets the commands you enter into the shell. It allows you to do command-line editing, read commands from the shell, and run commands in the terminal window. Bash generally comes by default in most Linux computers.

5. What is the Advantage of using an Open-Sourced OS?

Open-source software allows you to distribute your applications and modify source codes without any cost, so that you can add more features to your system and debug and resolve errors in the source codes whenever you need to.

LILO refers to a boot loader in the Linux system that is used to load the OS in the main memory to initiate its functions.

7. Can you Install Different Desktop Environments in Linux?

You can basically operate a Linux system with just one environment like KDE or Gnome, but you can also shift one environment from another. Sometimes users do this because some software only works in one environment and not in the other. That’s why it is important to select the environment based on the application requirements.

8. State the Basic Contrast Between Bash and Dos

The main differences between Bash and DOS are mostly based on 3 areas: Bash commands are case-sensitive, but DOS’s aren’t. The BASH/character is separatable by the directory, and it also works as an escape character. But under DOS, there is a command argument delimiter and a separator. While naming files, DOS uses 8 characters to name the file, and there are also 3 characters for every extension. Bash has no such rules.

9. What are the Two Types of User Modes in Linux?

The two types of user modes are command line and GUI.

GUI refers to a Graphical User Interface that uses the images and icons that you click on your computer and uses them to tell the computer what to do. You won’t have to remember every command and type them as on a traditional Linux machine, but the graphical elements will help you communicate with your system.

CLI, or Command Line Interface, allows you to type a command that instructs the system to perform certain functions. The CLI is super easy to use if you already know the commands and codes.

Swap space is a space on the hard disc that the system uses when the RAM is exhausted. This is also an alternative to physical memory that can substitute disc storage for the RAM when the RAM does not have enough storage to execute all the tasks of the programs.

13. How Many Types of Linux Shells are in There?

The Linux shell represents the user interface and kernel that executes commands in a Linux system. These shells basically execute commands that your computer understands and operates, and the commands are human-readable. There are different types of Linux shells used on a Linux system: Bash, KSH (Korn Shell), Bourne Shell, TCSH, ZSH, and CSH (C Shell).

Daemons are background processes that don’t have any terminal that controls them. When your computer is bootstrapped, these processes get started and end when you shut the computer. These processes extend the functionality of your system and provide the purposes that are not offered by your operating system.

15. What is Virtual Desktop?

The virtual desktop allows you to open multiple programs at the same time and keep the desktop clean. It does not minimize the programs and restore them but processes the functions smoothly and simultaneously.

17. What are Symbolic Links?

Symbolic links are like the shortcuts in Windows that allow you to find files, programs, directories and provide you with instant access to those resources.

18. What is the Ctrl+Alt+Del Key Combination in Linux?

The Ctrl+Alt+Del key combination allows you to restart your computer, but the reboot is so instant that it does not show any confirmation message.

Hard links take you directly to a physical file on your computer. Even if you rename or move the file to a different location, the hard link will work because the link is for the file and not the file location.

20. What is a Nameless Directory?

A nameless directory is an empty directory that serves as the nameless base of your Linux file system and as an accessory for files, drives, and devices.

We could share more Linux Interview Questions with you, but those won’t help you prepare for your purpose anymore since you are a beginner. The best way to prepare for a Linux interview will be to memorize these questions we have given here and their answers first, and when you are at ease with them, you can go into a deeper analysis. To help you with the same, we have demonstrated many advanced and beginner-level Linux interview questions in our other posts. In addition to that, feel free to check out our other interview questions too to take your preparation to the next level.