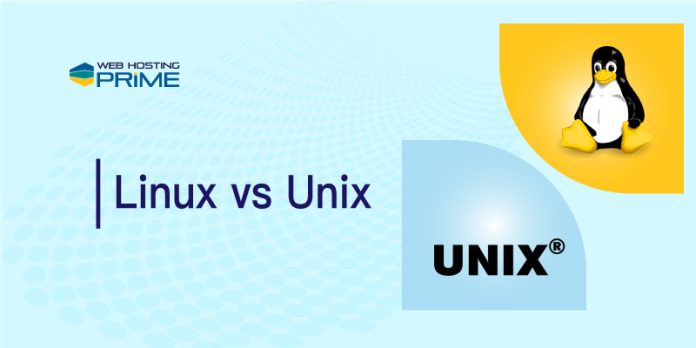 The thing with Linux and Unix is that these two terms are interchangeable for many people. But in fact, that’s not true at all. Let’s give you a foreshadowing here, Linux is like a clone of Unix, which is preferred by brilliant minds or hackers across the globe. Creating Linux was to make an OS that is free for all and can be customized according to the user’s needs. On the other hand, Unix is more like an operating system framework. Unix has multiple versions, just like Linux, but Unix is quite older than Linux, and it was first released in the 1960s.

For some, it was the first operating system that any computer had. Well, there is more to it than we know. But without any further delay, let’s reveal today’s topic in hand, which is Linux vs. Unix. In this article, we are going to talk about the main difference between the two, along with their history, benefits, and things you need to know before installing them in your system. So let’s get started, shall we?

Computers were as big as houses in the early days of computation, so it was quite difficult to operate them. In addition to this, every computer has its own operating system, which makes it even worse to use them. Because each computer has its own OS, the software programs are designed specifically for the computer on which it needs to run.

In 1991, a student named Linus Torvalds from the University of Helsinki thought about having a free academic version of Unix, and he did that by writing his own code. The code matured, and then it was called Linux Kernel. Linus wrote this program for his own computer at that time because, at that time, he couldn’t afford to have a Unix 386 intel system. With the C compiler’s help and the MINIX, he created the first Linux operating system. Even now, the GNU C compiler used by Linus is the number one choice for compiling Linux code, but now other compilers can also be used to compile the code.

Unix is a multitasking operating system that first appeared in the 1960s at AT&T Bell Labs. Originally it was designed to be used exclusively by programmers. The main reason why the company made this OS for developers was its flexibility and power. During that time, Unix became popular and was used in various laptops, servers, and desktops.

The flexibility of Unix made it the operating system which has been ported to more machine families. As a result, it somehow lost its identification and was considered to be an open system. The roots of Unix are present in the Comprehensive Time-Sharing System (CTSS), which F. Carbato developed from MIT.

Linux is one of the best open-source OS, unlike macOS and Windows, which come at a price point. But Linux is not limited to just operating systems. It has now become a globally recognized platform to run desktops, servers, and even embedded systems. It has a number of distributions and variations due to its modular design. Below are some of the important benefits you get to enjoy with Linux as your operating system.

Just like we said earlier, Linux is open source; as a result, it has become one of the most favorable operating options for developers. Surely, it is not 100% foolproof; still, it packs more power to handle vulnerabilities. In addition to this, it asks for admin’s authorization before running each application. This makes the virus remain inactive until the admin gives it access to run. Furthermore, Linux does not require you to have any antivirus program.

If you are using aged hardware, then Linux is the system that can help you in infusing a new life to your older systems. There are plenty of distros options available for you to choose from that are quite light and are easily handled by aged hardware with ease. Some of the common lightweight distros of Linux are Fedora, Ubuntu, Debian, and Linux Mint.

From these distros, you can easily surf the Internet, create a web application via writing code, and can do a lot of things that might not be possible when installing Windows operating systems in aged hardware.

3. Linux is the Top Performer

Linux has an advantage when it comes to being the performance packer for various workstations and networks. It makes it possible for a large number of people to work side-by-side on a network without causing any network breakdown.

With Linux, you can make your network a true multitasking beast that doesn’t slow down even when the network is churning big files. In addition to this, Linux will perform much better even when the machine is on full load, and there is no space in the hard drive.

When a developer is trying to create something, they often come across the challenge of using files in different file systems such as FAT, NTFS, and others. But with the use of Linux, that is not the issue. That’s why it is highly beneficial for engineers. On the other hand, when using Linux, you don’t need any special permission to change the color scheme or other preferences. Likewise, you can run multiple desktops on Linux. Thus, you are free to choose which desktop environment you want according to your requirements.

Unix was considered the operating system for small computers, but that’s no longer the case; it has become quite a powerful OS. Unix can be used concurrently by a number of users. You can interact with a number of systems via a command-line interpreter known as a Shell. Apart from this, we have lined up some other benefits for you to go through to better understand how Unix can be beneficial for your work-related tasks.

To do even the smallest work, Unix developers have come up with commands that can instantly process those tasks. As a result, it does have a lot of commands, and each of them performs one simple job only. Besides, you can use two commands by using pipes and creating a pipeline using two commands.

On the other hand, most of the Unix programs that are coming out these days can take the output of the first command as the input for the second. This results in the combination of various programs and the workload being significantly less.

The utilities which are present in Unix are made in the form of modules. As a result, it makes it easier for the programmers to create a small program in any module that is present in Unix. Once the program is created in a single module, it works perfectly and consistently throughout the system with no issues.

The source code of Unix is written in a simple C programming language which humans can easily interpret. Also, the source code is open-source. As a result, people can read it without having to ask for permission in the first place.

Unix is one of the few operating systems that use a hierarchy-style structure to store information. As a result, the file system comes with maximum flexibility in grouping up the information in such a way that it reflects in a much more natural way. In addition to this, this will give users the ability to easily maintain the implementation.

Unless you are someone with the text-based approach to run applications in the operating system, you are bound to find Unix difficult to use. The whole interface of Unix is designed to keep in the skills of programmers and other professionals. It is going to take you some time to get used to the bland interface, but with time it gets better, and you will feel the use of it to be more natural than ever. The best thing you can do is watch tutorials and keep on practicing. The more you use Unix, the better it gets with time.

2. User Must Know the Features

When you are using Unix, you need to know its workings and features in the first place. There are no tutorials that come plated for you to learn its basics. Unix works well with programs if you are familiar with the use of commands. As a result, if you ever feel like working on this system as a fixed black box, you will have a hard time.

3. Utilities Can Be Overwhelming Too

With the base version of Unix, you are getting 400 standard utilities if you are someone who is just getting to know the operating system. The most common way to learn it is by trial and error. There are only a few tutorials available on the Internet that clearly describe how each of the Unix utilities works. Remembering the commands is the first step to maximizing productivity with Unix.

4. Customization of Commands is Quite Tough

The customization that you get in Unix is brilliant, but it can also have its disadvantages if you damper it just too hard.

Linux is one of the most well-maintained operating system architectures, which was community-developed. But that is one thing we know about Linux from the very start. Below are some unknown facts about Linux that will surely blow your mind.

Linux kernel has the smallest line of codes. As of 2018, in Linux Kernel there are 20, 323, 379 lines of codes. As a result, it is one of the largest open-source projects on the planet right now.

Linux at the beginning wasn’t called Linux. It started as a hobby for Linus, and at first, it was called FreaX which means, it’s a combination of free, freak, and Unix. Thankfully his server hosting company made him change the code who preferred the name Linux.

Linux development used to take place in the Minix operating system, which resulted in Linus adopting the file system layout, which is quite similar to Minix for the fledgling project. But it didn’t last long due to the inefficiency.

Linux is the one operating system that can run on almost anything. It can run on smartphones, mobile tablets, submarines, and space rockets as well.

Now let’s talk about some of the facts about Unix as well, and see what type of secret facts it hides from the users.

The original code of the Unix kernel was rewritten completely in the C programming language.

Unix was the first operating system that could handle multi-user and multiprocessing.

The best way to interact with Unix is by using the command-line interface. It will take some time to get used to it, but once you find your way around, things will get simple and quite flexible as well.

Right now, there are two types of Unix systems available, the first one being the original one which AT&T Labs developed, and the second is the free operating system type which usually comes with the BSD in their names.

This is what Unix and Linux are all about. If you are a programmer, then learning both of these operating systems is a great idea to excel in your programming field. On the other hand, Linux is one of the most secure operating systems out there in the market.

Difference Between Client and Server