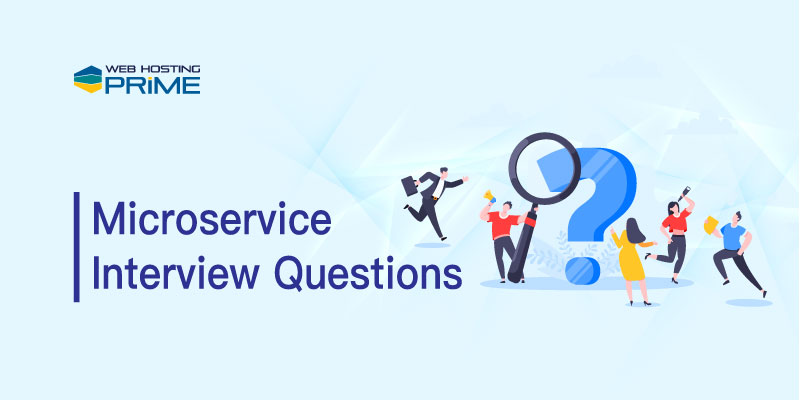 The inception of Microservices was initiated at a software architects workspace in Venice. The concept of Microservice Architecture or Microservices came into being in May 2011. Soon, the theory of Microservices was transmitted among the dominant companies and firms across the world. It aims to develop an extensive application in the shape of distinct components. The components or modules prefer to work individually but under the same business program. Due to its simple operation and flexible services, the demand for Microservices is increasing day by day. Microservices has already established its name in the market for its services related to enterprise solutions, and now, the organizations are demanding its services for producing cloud services.

In this article, we have presented some of the most common questions regarding Microservices that are asked in the interviews. If you’re keen to build your career in this field and desire to impress the interviewers, then these questions and answers might be helpful to you.

Following is the set of top 20 questions with their most probable answers that are commonly asked in a Microservices interview.

1. What do you know about Microservices?

2. What are the key attributes of Microservices?

Ans: Here are the key attributes of Microservices:

3. Name the main components of Microservices.

Ans: The main components of Microservices are:

4. State the functioning postulates of a Microservice Architecture.

Ans: Microservices can be streamlined into various components that can individually implement a single task. Here are the functioning postulates of a Microservice Architecture.

5. Mention the advantages and disadvantages of Microservices.

Ans: The advantages of using Microservices are:

The disadvantages of using Microservices are:

6. What are the tools that are used for Microservices?

Ans: Mostly, three tools are used for Microservices. They are:

7. What do you mean by Spring Cloud and Spring Boot?

Ans: Spring Cloud: Spring Cloud can be defined as a system that incorporates external systems. It is a momentary framework that is designed to make applications rapidly. Because of its connotation with a set of data processing units, Spring Cloud plays a substantial role in the architecture of Microservices.

Spring Boot: Spring Boot in Microservices is an open-ended framework that offers a platform for developers to build standalone spring applications. It helps the system to enhance its productivity, and it also reduces the time to develop and deploy.

8. What role does the Actuator play in Spring Boot?

Ans: An Actuator offers an opportunity to the RESTful web services to gain entry to the present state of an ongoing application. Besides this, a Spring Boot actuator also helps to monitor and handle the usages of an application without the need for the code or configuration setting of those applications.

9. Can the default properties of a Spring Boot project be overridden?

Ans: Yes, it is possible to override the default properties of a Spring Boot project by defining the properties in the application.properties file.

10. State the problems that a Spring Cloud can handle.

Ans: A Spring Cloud can manage the below-mentioned problems:

11. Differentiate between Microservices and Monolithic Architecture.

Ans: The differentiation between Microservices and Monolithic Architecture:

12. What is Domain-Driven Design?

Ans: OAuth (Open Authentication) is an open-standard authorization protocol or framework. It enables the user to gain entry to the client application via any third-party providers, including GitHub, Facebook, etc. It allows the user to share information and resources that are kept on one website to the other, without the need for a username and password. Access to the resources is also allowed by OAuth from the resource owner via the third-party providers.

14. What do you mean by Coupling and Cohesion?

Ans: Coupling is defined as a relationship between two modules, and it validates how much one module is dependent on another module. A coupling can be classified into three types: Highly Coupled, Loosely Coupled, and Uncoupled. Among them, Loose Coupled is the best type that can be accomplished over interfaces.

Cohesion, on the other hand, is a relationship between two or more elements within a single module. A module with high cohesiveness can execute a definite task with utmost efficacy without interconnecting with the other modules. The functional efficiency of a module increases if it has high cohesion.

Ans: The end-to-end testing of Microservices is used to authenticate the progress of every process. It confirms whether every process is operating properly or not. It also validates that the entire system is functioning together as a unit and achieves all the client requirements.

16. What is Distributed Transaction?

Ans: A Distributed Transaction in Microservices is an event that distances compound databases over the network belt without disparaging the ACID properties. Let us assume that there is a transaction that has two services A and B. If both the services require writing to their databases and rollback if either of the two services fails, then we can say that this is a distributed transaction.

Ans: The different approaches of a Microservice Deployment are:

Service Instance per Host: This strategy is used by Microservice deployment to execute a service instance for each host.

Service Instance per Container: Microservices uses this strategy to execute a service instance for their corresponding container.

Serverless Deployment: It helps to bundle the service into a ZIP file and then transmits it to the Lambda function. The Lambda function is a service without any states that mechanically execute adequate microservices to maintain all the requests.

18. What do you mean by RESTful in Microservices?

Ans: RESTful or Representational State Transfer is a web service that is based on the architectural model that helps the system of a computer to impeccably communicate and link with other devices across the web. These web services are useful for comprehending and organizing a Microservice.

19. What is the utilization of containers in Microservices?

Ans: Containers are the simplest yet the most productive technique to cope up with Microservice-based applications. It aids as a software development program that helps the user with the development and deployment of an application individually. A container permits the user to compress their requirements within the image of a container. The best example of a container is Docker.

Ans: API Gateway is a management tool of Microservices that is used to meet the obligation of a single client application. It works as a backend resource that has only one entry point, and because of the single entry point, there are complications like observing, dependability, and resilience. NGINX and NGINX Plus are the two best API Gateways that are used for Microservices.

When you appear for the interview, be confident and don’t get panicked. Try to correctly answer the maximum number of questions. We wish you all the best for your Microservice Interview, and we hope that you get your dream job in this field.