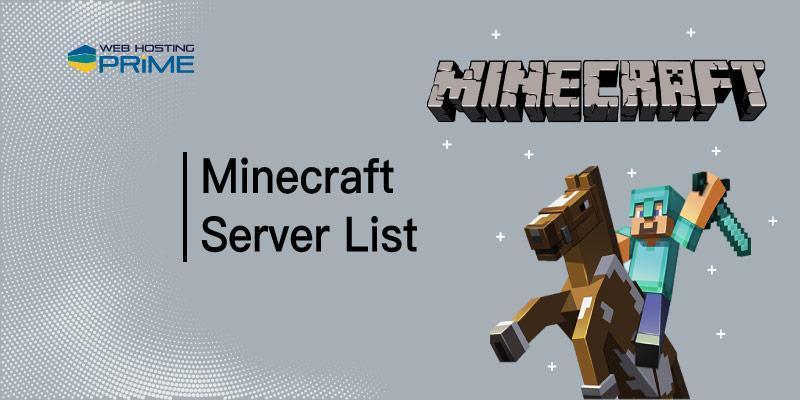 A Minecraft server is a player-run or business-run online game server for the 2009 Mojang video game Minecraft. In this context, the word “server” is often used to refer to a network of connected computers rather than a single device. Using Mojang’s software, players can create a Minecraft server on their computer. Also, they can hire a hosting company to run their server on dedicated machines with a 100% uptime guarantee.

Database operators run Minecraft online servers and have access to server commands such as adjusting the time of day and teleporting matches. Operators may also use plugins to change the server’s mechanics, add commands, and restrict certain usernames or IP addresses from accessing their Minecraft server. Through this article, we will share with you some crucial information regarding the Minecraft server and also list down the best Minecraft servers out there. So, let’s get started with this.

Is Minecraft Server Available for Free?

A lot of Minecraft games and server activities happen free of cost, but if you want to access special activities or features, show off with exclusive skins or chat flair, or unlock some surprise content with mystery boxes, you’ll need Minecraft Coins. Coins make it possible to make transactions from inside the game in a secure and convenient manner. Also, these purchases allow you to support the developers behind your favorite server communities.

What is the Range of Activities that Take Place?

Multiplayer servers provide a diverse range of activities with some having their distinct setting, rules, and customizations. Player versus player (PvP) gameplay can be allowed, which lets players battle each other. Many servers have custom plugins that give players the flexibility to do things that aren’t possible in the vanilla game.

The multiplayer option was first introduced to Minecraft on May 31, 2009, during the Classic phase of the game. The oldest server map is “Freedonia,” which can be found on the Minecraft server MinecraftOnline. Mojang launched Minecraft Realms in 2013, a hosting service that allows players to run Minecraft multiplayer servers quickly without the need to set up their own server. Realms servers, unlike standard servers, allow only invited players to participate, and they do not use IP addresses. Realms allowed Minecraft to support cross-platform play between Windows 10, iOS, and Android platforms from June 2016.

Mineplex is one of the world’s largest Minecraft servers. Thousands of players frequently access Mineplex, which has several areas dedicated to different game styles. It has the appearance of a studio MMO and is one of the strongest Minecraft servers, thanks to its attention to detail. The ever-present group of staff and players is brilliant, as it ensures that players can easily access the server to enjoy uninterrupted gaming.

Hypixel is a minigame-focused server created by a group of developers in 2012. It is one of the most popular game servers with a plethora of minigames, the majority of which were designed and programmed specifically for the server such as Turbo Kart Racers, Hunger Games, Murder Mystery, Vampirez, and Skywars. It’s difficult to get bored on this server because there’s always a new game style or a major event in the works. A huge amount of players are available online with whom you can compete.

This is one of the most excellent Minecraft servers available. It adds multiplayer support to the popular Pokémon-themed Pixelmon mod. PixelmonCraft is split into two servers and is based on the Kanto and Johto regions from the popular Nintendo games. In the game, the developers have recreated the regions in as much detail as possible. In Minecraft, animals have been replaced by Pokémon, which can be caught and used in battle. This means that there are gym leaders to battle, Pokémarts to shop in, and long grass to avoid.

This server brings the famed Grand Theft Auto experience to Minecraft. You can have a great recreation of the GTA experience in the server, making it one of the best Minecraft servers out there, with houses to buy, guns to fire, and cops to dodge.

Brawl offers hours of action-packed fun with games like Capture the Flag and Last Man Standing. Battle royale games like Fortnite and PUBG can trace their roots back to last-man-standing Minecraft servers where you can die endlessly and respawn.

RuneScape fans can now level up their Minecraft skills to 99 on this meticulously crafted Minecraft RPG server, which is designed to look and sound like one of the best free MMOs available. Minescape has drawn inspiration from both ORS and RS 3 over the course of two years, resulting in a faithful reconstruction of all of RuneScape’s landscapes, mobs, and abilities.

In this server-wide reconstruction of AMC’s The Walking Dead, PvP and PvE collide. Fight, craft, and thrive in the massive map while avoiding walkers and other players. The Mining Dead is a great way to see all of the popular sights while scrambling for guns, ammunition, and anything else that can help you fight off the undead. Like the others before it, this server takes its inspiration from the iconic comic The Walking Dead. Key locations from the TV show, such as The Prison, Woodbury, and Alexandria, are included in The Mining Dead.

When you first reach Potter World, Harry is fighting a dementor against the backdrop of Hogwarts. Potter World, like Middle Earth, goes all out when it comes to realism. Buildings with polished interiors that look like the real ones appear. You can learn how to make potions, battle other wizards and witches, or play a friendly game of quidditch. This server also has various minigames and daily events to keep players entertained as they explore and learn new skills.

Without question, 2B2T is the reigning king of Minecraft anarchy servers. The server has recently attracted over 1,000 players, resulting in lengthy queues of several hours just to gain access to this highly sought-after Minecraft server. The server has a long and tumultuous history that spans over ten years and has undeniably seen its part of highs and lows. However, in terms of popularity, it is currently at its highest point ever.

How to Join a Minecraft Server?

To join a Minecraft server, the first thing you need to do is to copy its IP address. Now, launch the Minecraft game and select ‘Add Server’ => ‘Multiplayer.’ The IP address and name of the server should then be entered. Please ensure that you click ‘done’ before returning to your domain list and selecting your preferred server. When you click the ‘enter server’ button, you’ll be transported to a new, breathtaking block world.

This article discusses the top Minecraft servers that you can join to take your Minecraft gaming experience to a whole new level. Hypixel is the most popular Minecraft server right now. The rivalry isn’t even close to keeping up with over 100,000 players on the network during peak hours. Hypixel is responsible for many of Minecraft’s most common game modes, including its flagship “bedwars” mode, which has since developed into its subgenre. Earlier, Mineplex was the most famous server, but its success has dwindled due to a lack of fresh and regular events. As players leave this server to try out new ones, other servers gain popularity, such as Minescape, Brawl, etc.