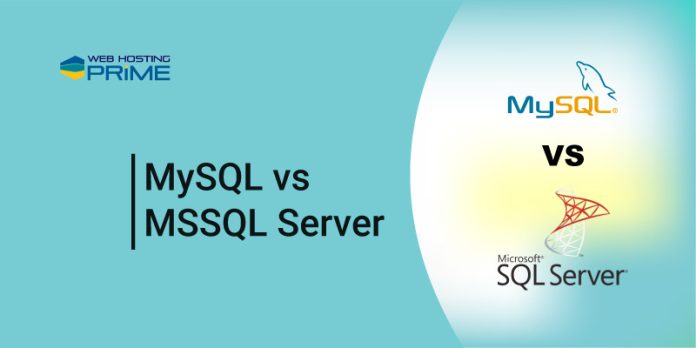 MySQL and MSSQL are both relational database management systems that store and save data in an orderly fashion. They mostly create tables, rows, and columns to update various structured data. In a table, rows are referred to as records, and columns are referred to as fields. You can communicate with that data using SQL, or Structured Query Language, for further updates, deletions, or creation. It’s difficult to choose between MySQL and MSSQL because they’re two of the most popular database management systems. But not when you understand the key differences between MySQL and MSSQL, as demonstrated in this post.

MySQL was developed by MySQL AB in 1995 and is currently known as Oracle Corporation. It is a company based in Sweden. MySQL is an open-sourced RDBMS that allows you to store, recover, boost, and execute a database. There are many alternatives to MySQL on the market, and most of them come with similar functions and syntax. MySQL is a cross-platform system that can be used on Windows, Mac OS, Solaris, and other operating systems. Even though in its initial stage, MySQL was written in C and C++, nowadays it is available in English exclusively. With MySQL, multiple users can access your database and you can execute SQL queries. Developers who work on Linux computers typically use MySQL RDBMS with Apache as well as PHP Web Server.

SQL Server is another Relational Database Management System or RDBMS, but it got its name from Microsoft. Microsoft developed MSSQL in 1989. MS stands for Microsoft, and SQL means Structured Query Language. This one is the programming language that organizes the stored information in the RDBMS. Various databases mostly demand small modifications in the SQL syntax, but the databases most of the time stay the same. You can operate SQL using simple commands or statements, and it will also help you keep the data secure and precise. At the same time, it will help you maintain the virtue of the databases, no matter their size. MSSQL was written in C and C++, and ANSI considers it a common language for running relational databases like MySQL. With MSSQL, you can access, manipulate, and upgrade the data inside your database system. Along with that, you can use it to manage data access and create and handle database schemas.

MSSQL was only created for Windows systems, but now it also supports Linux. It comes with language drivers and various languages like English, French, Spanish, Japanese, etc.

Now if you are confused between MySQL and MSSQL because their names look similar, then you should find out the differences between these two. But first, we are going to show you the similarities where all the confusion typically comes from.

What are the resemblances between MySQL and MSSQL?

MySQL and MSSQL are relational database systems, and they have similar qualities. However, most developers master one of them, and their internal architectures are different from each other. We will go into the different parts later, but now it’s time to dive into the basic similarities:

Now that you know all the key similarities between MySQL and MSSQL, you need to find out the differences as well to understand their different use cases.

Top 5 Differences Between MySQL and MSSQL

As per the basic relational database standards and interfaces, MySQL and MSSQL are similar, but their operational methods are quite different from each other. Most of the differences exist due to their architectures, but those differences are not usually noticed by beginner users. However, you still need to consider these differences before making a decision.

MySQL is compatible with Windows, Linux, Mac OS, Solaris, OpenBSD, IBM, FreeBSD, ArcaOS, and more. Mostly, it is compatible with almost all popular operating systems. However, MSSQL supports fewer platforms, including Microsoft OSs, Microsoft Server, Mac OS, and Linux. Initially, it was only available for Windows, but now it also supports Linux and Mac OS.

As previously stated, My SQL supports cross-platform, but it also has its own set of features such as triggers, data definition language, ACID compliance, SSL support, updatable views, stored procedures, cursors, Unicode support, and so on.MySQL also supports various storage engines, and you can also use your own plug-in storage engines. MySQL also allows you to filter the rows and columns in tables as well as users using various methods. However, you will have to implement multiple queries to filter the tables in the databases individually. You can also disengage full data as SQL statements in MySQL, which serves as a backup process. When you are backing up the data, it will block the database so that there is no corruption for data transformation from one MySQL version to another MySQL version. And by blocking the database, MySQL also makes sure that there is no attack on the database system. However, this process takes time and a lot of effort because you will have to create and launch multiple SQL statements to restore the data. Another thing to remember is that you cannot kill or cancel a query statement without stopping the entire process.

However, MSSQL also has a lot of useful features, including a table module where you can store or record the data. In the MSSQL server, multiple developers can work on the same database. SQL Server has an easy-to-understand syntax, and with this system, you can also write SQL queries in a jiffy for updating, inserting, creating, and deleting information, which is also called CRUD statements.

The server also has a filtering option that helps you divide the records from the database. With the help of this feature, you can separate multiple rows and you don’t have to keep track of the number of databases. After filtering the data, you can store it in a different allocation database. Its data storage engine is named Viz, which is its native engine, but when you are backing up the data from the database, it won’t block the database. Hence, since there is no blocking in MSSQL during the backup process, the user can complete the backup in less time than MySQL.

Both MySQL and MSSQL are capable of delivering brilliant performance and high speed. You can run them on various databases at the same time on a single server, and they utilise indexes for data filtering to boost the performance. But when it comes to response time, MSSQL is better than MySQL.

MySQL and SQL servers are created for duplicate clusters, but MSSQL is more secure than MySQL. MySQL lets the developers enter and manage files in the database with the binaries during the execution time. And it also enables other processes to enter and change the files during run time. But MSSQL server has a built-in security feature that protects the data as well as monitors, alerts, and processes data classification. When it detects any unusual activity, it will identify them and send alerts to the developers. It can also recognize this configuration as well as security faults.

There are many other differences between MySQL and MSSQL, but the five we’ve discussed in this article are the most important ones for understanding the fundamentals of the two database management systems. You can compare these databases and their parameters to find the one that is best for your business. As a result, they are both compatible in terms of speed and performance.

Difference Between Client and Server