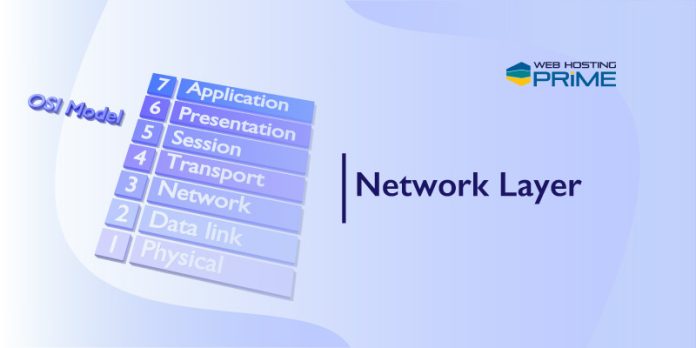 On the Open System Interconnection (OSI) communication model, the network layer occupies the third position. The primary function of the network layer is to provide the ability to move the data in and through the other networks. By adding the address information to the packaging data and using the appropriate network routes, the data is forwarded towards the transport layer, which occupies the fourth position in the OSI model.

Where does Network layer stand In the OSI model?

As we mentioned earlier, the network layer is present in the third position of the OSI model. It is present in between the transport layer and the data link layer and is used to handle the requests that come from the transport layer. After accessing and processing a number of functions on the request, it will forward the service request over to the data link layer. Moreover, the network layer also works by translating the logical addresses to physical addresses.

Also, it is the layer of the OSI model that determines the route of the data packet from source to destination. At the same time, keep an eye on the network traffic problems by switching the routing and controls. When the congestion of data packets happens, all in all, the central role of the network layer is to move the data packets in the network from the sender to the receiver.

For a number of reasons, the network layer is considered the backbone of the OSI model. The first thing it does is manage the best virtual circuit that can be used to transfer the data between the nodes as it provides the information about the destination and the IP address attached to it for each data packet.

The network layer checks the errors present in the data packets with the help of the Internet Control Message Protocol (ICMP). By doing so, the network layer ensures the packets are being sent to the receiver host correctly. The network layer also includes hardware devices such as routers, bridges, firewalls, and switches. But in reality, it is used to create a logical image to provide the fastest route for communication and implement it on a physical medium.
The network player can be found in every single host and receiver on the network.In addition to this, the router examines the header fields that are present in all the IP packets that pass through it. After that, the networking software will be put to use so as to attach the header of each data packet that is sent and read. So it can determine how the packet is being handled from the receiving end.

When it comes to network protocols, this layer’s most commonly used protocols are Internet Protocol (IP), Netware IPX, and SPX. The network layer’s infrastructure is extremely vulnerable to all malicious network attacks. This is due to the fact that the network layer is the one that is accessible via the internet. Denial-of-service (DOS) attacks, for example, can be launched in order to overwhelm physical network interfaces such as routers. As a result, they will cease transmitting data to the network.

On the other hand, many people compare the network layer with the internet layer of the TCP/IP model. But there are a number of differences between the two, and TCP/IP only comes with a limited number of functions, and all of them are covered by the OSI network layer.

What Is the Five-layer network model?

TCP/IP is the newer model, and it has five layers instead of the seven that were present in the OSI model. The five-layer model merges the presentation and session layers together with the application layer. Apart from this, there remain four more layers, and of them, we are going to discuss them below.

Let’s suppose you are taking a call on Skype from your laptop. On the other hand, your friend is using Skype on their phone. He is present on different networks. Skype here plays the role of a network-connected application. So when your friend is sending you a photo of their trip over Skype, it will be sent via File Transfer Protocol (FTP).

Moreover, the session layer is also used to establish and end communication between the two devices. With the five-layer network model, all these three layers are combined into one. This makes the networking much smoother and the data packet processing much faster.

Data packets will be received from layer 5 and segmented by this layer. Now each segment or even the data unit comes with its own source and destination port numbers along with its sequence number. This will help the data packets ensure that the segments will come in the proper order. Moreover, this layer also takes control of the amount of data that is being transmitted.

For example, your laptop may be able to work with a 100 Mbps network speed. But your friend on the other laptop is only able to process the data at a rate of 10 Mbps. The transport layer will slow down the transmission of the data. As a result, no data packets are lost due to time dilation.

On the other hand, when your friend sends a message back to you, The server will increase the transmission rate, so the performance of the network will improve. The 4th layer also performs error-checking. So if the data is missed from the segment, layer 4 will retransmit the segment. Both TCP and UDP are quite well-known protocols in the world of network administration. These two protocols exist in the transportation layer. TCP favours data quality over speed. If we look at the UDP, it favours speed over the quality of the data packets.

It is used to send data packets between networks in the form of data segments. The layer will assign the source and destination IP addresses for each data segment when you send a message to a friend. Your IP address becomes the source, and your friend’s IP address becomes the destination. Aside from that, the network layer will be in charge of determining the paths that data packets will take for delivery.

It receives data from the network layer and performs physical address calculations. That is, it will append the physical address, which is also the MAC address, to the data packet. This will generate a frame from the data unit that includes the new information. It will be used to enable frame transport over local media. The data link layer is a component of the software that runs on your computer’s Network Interface Card (NIC). If we think about it, the data link layer serves as a bridge to the media and assists the layers above in controlling data placement.

These are the network components that you can actually interact with. This layer is critical because it converts binary data into signals, which are then transmitted over local areas. Electricals such as modems, routers, cables, light and radio signals, and so on are included in the physical layer, depending on the type of media used. As a result, when you send the data and your friend receives it, it is decapsulated and then converted back to binary. As a result, other layers present above the physical layer on your friend’s side can read it.

What Is the Function of Network layers?

Here is a list of the different functions that a network layer in the OSI model of a network performs.

First, when the data is being sent from the sender, the network layer gets the data from the transport layer. The transport layer is present just above it. After that, it divides and encapsulates that data into small packets and sends it to the data link layer. This process is repeated but in reverse order when the client is receiving the data.

The network layer is also responsible for the partitioning of the sub-networks or even the subnets. Moreover, it also controls the operations of the subnet. Routers are network devices that work on this layer to forward packets between a number of subsets as well as across different networks.

It also handles the congestion that takes place in the network. This happens when there are too many packets present in the network, making it overloaded by them. Apart from this, the network layer also manages the issues of transmission delays, transmission time, avoidance of jitters, and more.

Aside from that, their work is nearly identical, and the network layer and the internet layer are the same thing. The only difference is that they are derived from different network models and provide information on how the internet operates.

What are the different protocols used In-Network Layers?

An application protocol is nothing more than a way of formatting data, which allows two or more devices to communicate with each other. At the network layer, a number of protocols are used to enable connection, testing, routing, and encryption. The most common are the following:

So that’s what the network layer is all about; it’s an important part of the OSI model, and it’s very similar to how the TCP/IP model’s internet layer works. Packetization, error control, flow control, congestion control, routing, and forwarding are all performed by it. The network eliminates the single point of failure in data communication systems through packetization. Aside from that, network layer routers will reduce extra traffic by establishing collision and broadcasting domains.