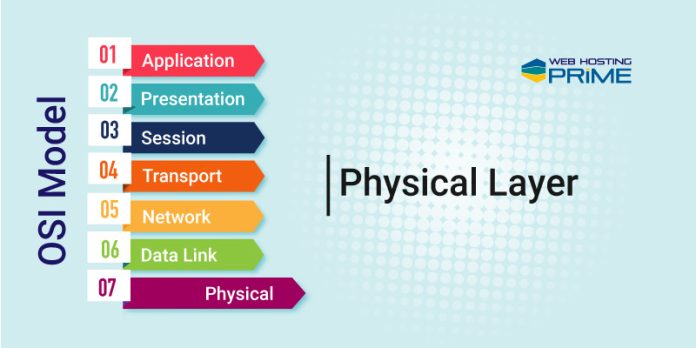 The physical layer is the one that is present in the lowest part of the Open System Interconnection (OSI) model. The physical layer is also considered to be layer 1 of the OSI model and provides bit-level transmission between a number of devices. In addition to this, it is also used for the electrical and mechanical connection of the physical medium for synchronized communication. All the physical links that are a part of your network are connected to this one.

Even if we are talking about wireless connections, cabling, connectors, network interface cards, and others, they are all connected to the physical layer of the OSI model. Today, we are going to find out why the physical layer is so important and what role it plays in the OSI model. Furthermore, this article will also talk about the protocols of this layer and how they are implemented in the network. So let’s begin.

What Is Physical Layer In OSI Model?

The physical layer in the OSI model is the one that is given the role of interacting with the actual hardware and signals the mechanism to work. It is the only layer of the OSI network that deals with the physical connectivity between the two stations. From this layer, the network gets to define the hardware equipment, cabling, wiring, frequencies, and pulses that will be used to represent binary signals.

The data link layer is the one that uses the services provided by the physical layer. The physical layer takes over the frames from the data link layer and then converts them into electrical pulses that will represent the binary data. After that, the binary data will be sent over the wired or wireless media depending on the type of network. It uses two different types of signals, and those are:

Analog signals are in continuous wave motion, and when it comes to representing them, you need to take inspiration from continuous electromagnetic waves.

These signals are used when the data is being sent over the physical medium. It has to be converted into electromagnetic signals. It might come as a surprise, but even data can be present in the form of a human voice or in a digital format. So it can be stored on the disc and other storage devices. Both digital and analog data can be presented in a digital or analog signal.

Defining the bits: it will use a protocol to convert the bits from 0s and 1s to a proper signal that can be sent over the network.

Data rate: the physical layer will come up with a certain speed at which the data needs to be transferred over the network. Primarily, it is defined in terms of the speed of bits per second.

Synchronization: A physical layer on both ends of the network makes sure that the sending and receiving of bits are in synchronized form.

Handling transmission mode: Here, the physical layer functions as the one that determines the direction of transmission. These modes could be simplex, meaning transmitted in one direction. Full-duplex means data is transferred from both ends at the same time. Half-duplex means information is allowed to be sent from both the endpoints but not simultaneously.

Interface: this function is used to determine how different devices present in the network will be connected to the transmission medium, like ethernet or radio waves.

The devices present in the network should follow specific topologies such as mesh, star, ring, and bus to connect with the other instruments.

Lastly, it also has to deal with the baseband and the broadband transmission of bits.

What are Physical Layer Topologies?

According to the functions of the physical layer, there are three types of topologies. Each of them has its own set of rules and functions to perform. They are described separately below.

This is more of a simpler side of topologies, and yet it is very effective. The bus topology is the one that requires the nodes present in the network to have a linear formation. When we look at the bus topology, each device will be connected to a single cable. One thing to note here is that. When you are using the bus topology, the data transmission will be unidirectional. What it means is that the data will only travel from one end to the other. The best thing about bus topology is that it is easier to configure and costs much less than other forms of topology. This is because it uses a single primary cable that is known as the “backbone cable.” As a result, when compared to other topologies, your cable costs will be significantly lower. The additional benefit is that it will be much faster to install. But it does come with its own set of flaws.

First, it will limit the number of nodes that you can have. A bus topology, on the other hand, is ideal for small to medium-sized businesses.If something happens to your backbone cable, the whole network will go down. Still, if it fails, you can recover from the network in a short time because you only need to change one cable, that’s all.

Another simple design after the bus topology is the ring topology. As you can make out from the name, it is present in the form of a circle. Where each device present in the network has two adjacent nodes, in a common topology, you will find four nodes, but you can add more if there is a need for it. The ring topology is pretty versatile in nature, and it fits all the different sizes of businesses. Many companies are using it because of the plethora of advantages it brings to the network.

One of the advantages of ring topology is that the number of nodes added to the network has no effect on transmission speed. Furthermore, the ring topology can be made unidirectional or bidirectional. This makes future growth much more feasible. Ring topology is also relatively simple to set up and, as previously stated, it can be extended. But keep in mind that when it comes to troubleshooting, you will run into a slew of issues. If, on the other hand, one node crashes or goes down, it causes a disruption in the entire network.

If you think about it, mesh topology is just a glorified ring topology. It is the most common setup for a business, and there are a number of reasons why you should be opting for it. The first reason for using mesh topology is that it brings in reliability. This is because each node is connected directly with the other device using a point-to-point link. You will find that devices connected to each other in a network have zero to no problems. That could result in the halt of data traffic. Moreover, if somehow one of the nodes is not working properly, the other nodes will have no problem with it.With interconnected devices, you get higher security benefits and privacy settings on your network. This is something quite crucial for a business.

The reason why mesh is considered the safest option is that all the connections present in this topology are connected to a point-to-point connection. One thing you should know is that expanding the network in a mesh topology is a tough job. There are a large number of cables you will need in order to form a mesh topology. Even if more cables mean a more secure network, still, arranging all these cables will take a lot of time. In addition to this, troubleshooting is going to be a lot harder than any other form of topology. You will need an expert to get the issue sorted out.

Without a doubt, a star topology pretty much looks like a star. At the centre of the star, you are going to find a central hub that is connected to each of the nodes present in the network due to the main hub star topology being one of the most reliable network topologies to exist. Troubleshooting is also easier because each node is directly connected to the central hub with a single connection. Moreover, the performance is much faster because data doesn’t have to go through each node and then reach the central hub.

On the other hand, if one of the nodes fails, the other will still work perfectly and do their work with no issues at all. There are just two things you need to consider, the first one being the cost of having a central hub. Apart from this, the energy required to run the star topology and the central hub is more than other topologies. Finally, if your central hub fails, your entire network will cease to function.

Given below are examples of protocols that use a physical layer to get their work done.

A digital subscriber line is the type of line used in modem technology. The current telephone line is using it to transfer high-bandwidth data such as videos and pictures to those who have subscribed to the service. This DSL provides service subscribers with dedicated point-to-point public network access. It typically connects the network service provider’s (NSP) central office and the customer site. Furthermore, it can be used in a local loop created within a building or campus.

This is a circuit-switched telephone network, but it can also be used for packet-switched networks that support digital voice and data transmission. As a result, digital phones have higher audio and data quality than analog phones. Furthermore, you will be provided with a packet-switched connection for the data increment of 64Kbps. This network protocol provides a maximum of 128 kbps of bandwidth both upstream and downstream. You can achieve a higher data rate by using ISDN and channel bonding.

It is a personal communication area network that is deployed in the infrared rays. The transfer of data takes place between the laptop and the smartphone when two devices are in near proximity to each other. It is used to send data from a computer to a printing machine via a Bluetooth connection. The physical layer in this protocol provides the value of 1m to 10cm depending on the use case for the low-power LEDs. In addition to this, it has three different types of modes as Synchronous PPM, Synchronous Serial, and Asynchronous Serial.

It is an infrared ray-based personal communication network. When the laptop and the smartphone are in close proximity to each other, data is transferred between the two devices. It is used to transfer data from a computer to a printing machine via Bluetooth. The physical layer in this protocol provides a value for low-power LEDs ranging from 1m to 10cm depending on the use case. It also has three modes: Synchronous PPM, Synchronous Serial, and Asynchronous Serial.