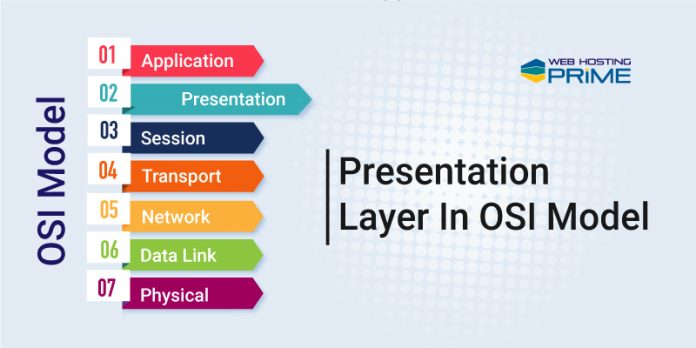 The presentation layer has many names. In some places, it is called “data presentation,” and some people like to call it “data provision level.” It is used for setting up the system-dependent representation of data in an independent form. As a result, it enables the syntactical correction of data exchange between a number of systems. The data can be present in the form of ASCII, EBCDIC, and other standards. Furthermore, functions such as data compression and encryption ensure that data is only sent by the application layer present in the network.

The main work of the presentation layer happens when it takes the data from the application layer and then processes its function on the received data and sends it forward to the session layer. The presentation layer follows the data programming structure that has been developed for various languages in order to give a real-time syntax that is required for the communication between the two objects. These two objects can be layers, software, networks, or even different systems.

The formatted data should be acceptable to the layers where it is sending the data. If this is not happening, the presentation layer is having some issues that need to be resolved. This particular layer uses redirectors and gateways as its components to transfer the data. The presentation layer is the sixth in the OSI model and performs a number of functions that we will discuss in the next section of this article.

Let’s begin with the most common function that the presentation layer performs, which is the encryption of the data. So it can be sent across various networks. This layer also takes care of how data is read from the receiver end. to make it easier for the receiver system to understand the information efficiently and use it effectively.

Apart from this, it also manages the abstract data structures and converts them into high-level data structures so they can be used in more complex tasks like banking records. This high-level data has to be defined or exchanged depending on the client’s needs. Both the encryption at the sender’s end and the decryption at the receiver’s end are done by the presentation layer.

Furthermore, the presentation layer also provides data compression capabilities. As a result, the data transfer will use less bandwidth and save time. The primary purpose of using compression is to make the bits smaller in size so they are easy to transmit.

This specific layer is also responsible for the computer’s ability to exchange data and communicate with each other. This functionality is also known as interoperability. This is one of the essential functions that a session layer provides. This is mainly because different systems have their own set of encoding methods, so when the data is being transmitted from one to the other, if there is no interoperability present in the network, the communication between the two will not take place.

Likewise, from the name, you can make it out that this layer also deals with the presentation of the data. With the compression of data, the overall throughput of the network is also increased. Moreover, it also deals with issues such as string representation.

The presentation layer also takes on the responsibility of integrating a number of formats into a single standardised format. so as to provide an effective and efficient means of communication. In the same way, it makes sure that messages that come from the above layers and are sent to the lower layers are present in the proper format.

Besides this, it translates, formats, and manages the delivery of information that is required for processing and display, along with serialisation for ease of transmission.

One of the reasons why the presentation layer is so crucial for the OSI model is because of its ability to handle multiple forms of data that are a part of the application. Before it could forward the information to the session layer that is present below in the OSI model, the session layer did not have the proper function to modify the data that comes from the presentation layer. As a result, it becomes vital for the layer above to convert the data into an appropriate format and encrypt it in order to maintain the confidentiality and authentication of the data.

On the other hand, the presentation layer also applies encryption and various compression techniques to make the bytes even smaller than they already are before the sender transmits them over the network. When there are two devices communicating over a network that is encrypted in nature, then the presentation layer from both ends will take the responsibility of encrypting and decrypting the data from the sender and receiver’s end, respectively. With the encryption of data in play, both users will be free from compatibility issues. The presentation layer also does the negotiation of the transfer syntax.

Following are the various protocols that are used by the presentation to encrypt, format, and perform other functions on the network.

This protocol was created by Apple to allow people to share files over a network, as the name suggests. It was one of the main protocols used in the early versions of the Macintosh, and it was supported till the MacOS 10th version. Now, AFP has been replaced by the modern standard Server Message Block (SMB). AFP 3 was the very first that provided support for Unix privileges and transfer of files that were over 2 gigabytes, along with UTF-8 filenames.

The AFP was a part of the AppleTalk networking suite that made it possible for Apple laptops to communicate with each other over the local network. Even AppleShare used it as the foundational protocol. For a number of decades, this protocol was the primary protocol used by Mac systems to share their files with each other.

ISO presentation services are provided by LLP on top of TCP/IP protocol stacks. RFC 1085 defined it during its development. Furthermore, the LPP is a method of providing streamed-lined support for the services that a network requires from the OSI application in constrained environments. The primary motivation for developing LPP was to find a way to make the ISO common Management Information Protocol work with a TCP/IP-based network.

These are a collection of protocols that exist in the form of routines and primitives and are used to power NetWare. In most cases, they are referred to as NCPs. Even a single routine can be classified as an NCP. NCP is the basic language that NetWare uses for communication between a Novell client and a NetWare server. You can see a network’s unique number to determine what type of NCP it is using. The names are only used to describe the task that NCP is carrying out; they have no other meaning.

This one is basically the working of the presentation layer in the OSI model. It is also used to define a number of primitive data types and constructed data types, along with some other forms of data representation.

It is a standard representation of different types of data, with the use of standard data type representation. A programme becomes more confident that it is interpreting the data in the correct manner. even if the source from where the data is being transferred runs on a completely different architecture. In the real world, most programmes do not use XDR internally. Instead of this, they are working with the data type, which is specific to the architecture of the computer on which the programme has to run.

With the help of the SSL protocol, the presentation layer is able to provide a secure way to transfer the data between the web browser and the server. SSL will encrypt the link that is present between the web server and the browser. This ensures that all passwords exchanged between these two remain completely private and unaffected by cyberattacks or data breaches.

The SSL record protocol application is divided into a number of fragments. That fragment is then compressed, and an encrypted MAC is generated by using algorithms such as Secure Hash Protocol (SHA) and MD5 (Message Digest). After the encryption is done, the latest SSL header will be appended to the data. SSL uses a number of protocols to make the data transfer secure; some of these protocols are the handshake protocol, change-cypher protocol, and alert protocol.

One of the most significant advantages of using SSL is that you can make it perform according to your own needs. Or you can even design the SSL for the specific application as well. The company that developed SSL is Netscape. On the other hand, it is a two-layered protocol and is designed to make use of TCP in order to provide a reliable end-to-end secure service to both parties of the data transmission.

So the purpose of this presentation layer is to ensure that the message from the lower layers is presented to the upper layer in such a way that it can be easily understood. It is in charge of handling all kinds of message semantics. The presentation layer is located at the sixth position of the OSI model, and it is from here that you will be able to understand how data is transmitted from one system to another. If there is anything in the topic that you believe we have missed, please leave a comment and let us know. Until then, keep learning!