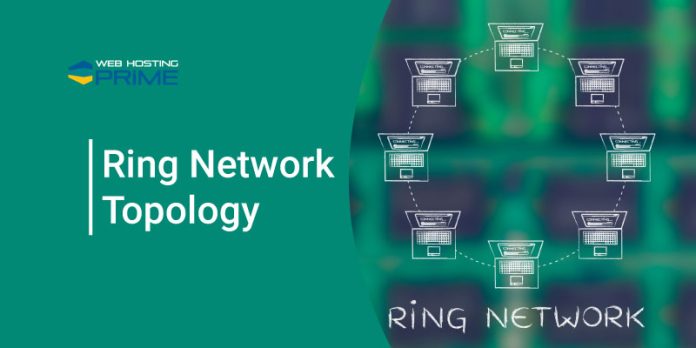 When you are using the Internet or any other form of a network there is bound to be a topology that your network is following. Many topologies are used by networks but the most common one is the ring network topology. It is considered to be of great use to both small-scale as well as large-scale networks. Here in this article, we are going to discuss the working of the ring network and why it is important. In addition to this, we are also going to discuss the benefits of ring topology and list down the alternatives that you can try if you are looking for a change.

What Do You Mean by Ring Topology?

Well, for starters it is a network architecture in which all the devices are connected to the network and form a ring-like structure. This formation of devices in the form of rings helps in sending in the information to every single device present in the ring topology network. One of the biggest advantages that you get with the ring topology is that it is highly efficient and can easily handle the massive number of systems present in the network. Furthermore, in the ring topology all the packets that arrive in the network travel in one direction. Thus, it is considered to be a unidirectional ring network.

If we look at the ring topology we can see it follows the pattern of interconnected nodes which are placed in a closed circular loop. The systems present in the ring topology are then connected to the two nearby nodes as an intermediate. This is the basic definition of ring topology. Now let’s move on to the part to show the working of ring topology. When you are looking to send the data to a specific node, then the data packet goes through each one of the intermediate nodes that are a part of the ring network. Once the data is sent to the destination it will be copied into the system.

On the other hand, every node present in the ring topology gets equal access to the media present in the network. But this also leads to the problem of conflict arising when one of the nodes is not able to transmit the data through itself, the entire ring network has to suffer due to a failure in connection.

When a ring network is unidirectional the data is forced to flow in one direction. It could be either clockwise, or anti-clockwise. These types of networks are also called half-duplex networks. Most of the networks that you see around you are using this type of unidirectional data flow only.

What is Token Ring Topology?

Many people think token ring topology and ring topology are the same. But that is not true, the first one is based on the latter one and it is a data link technology for LANs. It is used when the devices are connected to the network which is using ring topology. When you are using a token ring topology the ring passes over a physical ring. It is defined by IEEE 802.5 standard. In this form of topology, you are getting a special frame known as a token and there is a station as well. In addition to this, it is designed in a star shape. Besides, the token ring topology happens to handle priority in which some nodes may give priority to the token than the other.

Token ring, on the other hand, is also unidirectional throughout a special number of locations. The token present in this form of topology is more of a symbol of authority for the control of transmission lines. The token is responsible for the allocation of power to the station present in the network to send data when the token arrives at the station. All the stations present are connected via a concentrator. The concentrator is used as a logical ring around which the data is being transmitted at a speed of 4 million, 100 million bits per second. Every single station is connected to the concentrator with the Shielded Twisted Pair (STP) cables.

Why Do We Need Token Ring Topology?

A token present in the ring topology is a special bit traveling in a circular path. Here a computer will send the message that contains the token. If there is a continuous passage of a message then it is called token passing. The token passing is a method to confirm to the network that a token has been received by the computer and the transmission has been successful. The receiving end will get the data and then it passes the signal to the source where the signal will work as an acknowledgment.

The main use of ring topology can be found in those cases where the source needs to send an empty token with the message and address to the receiver. In that case, the token will be checking the address of the successive nodes. When the token finally identifies the node for which the address matches. The destination will copy the data present in the message and return the token with the receipt from the source’s address.

So when the actual source receives the token once again in the circular path of the transaction, it then verifies the message and copies it to the system to empty the token. This process is most common in Local Area Networks (LAN) and Wide Area Networks (WAN). With the implementation of token ring topology, the chances of packet collision are reduced because the flow of data is only in one circular direction. It also provides a high-speed data transfer between the systems present in the network.

You can use this network to work in a long-distance network, for example, it can be used in companies that have a massive workforce that is set up across multiple buildings. Ring topology is always used for managing a higher number of nodes and huge traffic communication. It is also quite inexpensive when compared to other forms of network topologies.

Applications of Ring Network in the Real World

Given below are the applications where the ring network has been in use for a user for a long time and it is irreplaceable in these areas.

The most common usage of ring networks can be found in connected computers such as colleges and schools. This is because in a ring network the flow of data is unidirectional so there are fewer chances of getting data to collide with one another when a lot of data is being transmitted in the network by multiple users.

As we said earlier, big companies that are spread across multiple buildings can take the advantage of ring networks. A ring network allows the high speed of data transfer. So one can easily receive a massive file in just a few seconds. Even if they are seated on the other side of the office.

This is more extensive than a LAN, but this type of network is located in a single geographical area which is also smaller than a WAN. In MAN you can find several LANs interconnected and forming MAN.

Given below are the disadvantages that you should know before using ring topology in your networking.

With the increase in mainframe computing and the requirement of having latency-free communication. The ring network is one of the few topologies that will grow with the expansion of the Internet. In the near future, we might as well see it replacing the Ethernet. The speed of the ring network topology will only increase with time and in no way it is going to be a limiting factor in its future growth.

ARPANET Overview: How Important was It for the Development of the Internet?