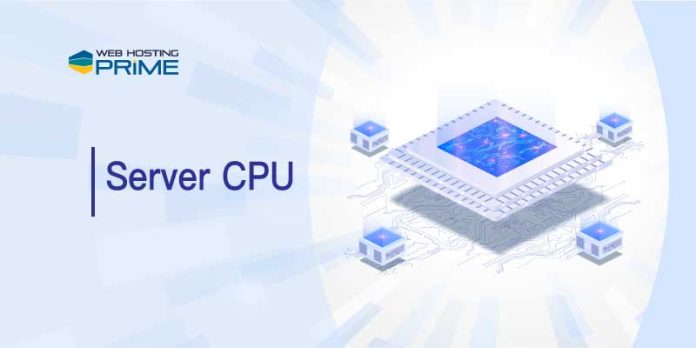 If you are someone who is from an IT background, then you must definitely be familiar with words like server, CPU, desktops, hard drives, and many more. But for many individuals who are in IT, a server is just a storage device that keeps critical data in one place. Well, it is more than that. Indeed, there are too many confusing terms when we are speaking of server CPUs, but in the end, the server CPU does the same work that is done by a regular CPU present in your laptop and desktop, but what makes it different is the sheer size of the workload it is able to manage with ease.

Today we are going to find out how a server CPU works and what the different components of a server CPU are that make it perform a heavy task without breaking a sweat.

What is a Server CPU?

A CPU is considered the most crucial component of a server as it handles all the computation that is taking place on the server. These CPUs are designed with dependability, flexibility, and scalability in mind. In addition to this, a server is always deployed on a rack-mounted unit, making it possible for them to put a massive amount of computing power in a small amount of space.

For many IT and network administrators, a server CPU is also known as a processor. With more server CPUs in a single rack, you will get better performance in terms of efficiency and faster completion of tasks, and more instructions can be executed by the server in a short time.

The main thing you need to look for when finding out the CPU for a server is its clock speed. The clock speed is the speed at which a CPU is able to execute instructions. The faster the clock speed, the faster instructions will be performed per second. Now, with the advancement in technology, server CPUs are using concepts like multiple cores, multiple threading, and subcycling in order to reduce the latency of a CPU.

What is CPU Core?

A core is a physical component of a computer processor that functions as a processor within a single chip. The greater the number of tasks a CPU can accomplish simultaneously, the more cores it has. Because a single core can only accomplish one task, many cores can be used to run multiple processes. A CPU, on the other hand, contains logical cores that function as distinct threads inside a core. They do improve CPU performance, but they are no match for the performance gained by adding a physical core.

What is a CPU Thread?

Threads are basically different paths present in the single-core, which can be used by the application to process some task. For example, if a CPU comes with six cores and has two threads per core, then it means the CPU has 12 different paths from where the information can be processed. The main difference between a CPU core and a thread is that two threads won’t operate in parallel. While this is not true for physical cores, which do perform multiple tasks, The core alternation between the threads takes place at such a high speed that it makes the system perform true multitasking.

The CPU is vital both in desktop and server environments; the rapid speed of the CPU obeys the commands of the input program. Also, the components of a server are dependent and powerful on the CPU. So, finding the right balance between them and the CPU has become a necessity.

There are two leading manufacturers of server CPUs, and these two companies are Intel and AMD. These two companies have made single-core, dual-core, quad-core, hexa-core, octa-core, and deca-core processors, and in the next section, we will explain how these differ from each other.

A single-core CPU will only be able to perform a single task at a time. Thus, they were used in earlier usage of servers when the processing speed needed by a server was relatively less. If we use this type of CPU for the execution of more than one application, the performance will have a significant declination. Thus, if one of the processes starts, the other has to wait till the one is finished. Here, performance is measured by the clock speed of the processor.

This is a single CPU that has two strong cores present inside of it, so it works as a dual CPU configuration. In this type of CPU, the processor needs to switch between a variable array of data streams. More than one thread is being executed.

This makes the dual-core handle multitasking efficiently. On the other hand, both the running programs and the operating system need to have a unique code which is called simultaneous multi-threading technology. Even though a dual-core is far better than a single core in terms of performance, it is still not as robust as a quad-core CPU.

With the development of quad-core, the CPU market has taken a giant leap forward. Now, this type of CPU has four cores inside a single chip. It divides the workload between different cores, causing it to be efficient in multitasking. One thing to keep in mind is that if the application can’t take advantage of multi-core processing, then the speed of execution will remain the same no matter how many cores the CPU comes with.

Most of the laptops that you see in the market have quad-core CPUs with eight threads. The laptops are power-efficient and can provide enough GHz for a person to execute multiple tasks at the same time.

This processor comes with six cores, and it can execute tasks at a much faster speed than a quad-core processor. This configuration can be seen in Intel’s Core i7 CPUs that were launched in 2010. But now, the same Intel Core i7 comes with an eight-core configuration. Hexa-core CPUs are now common in smartphones.

The octa-core CPUs are designed with eight completely independent cores. These have dual sets of quad-core processors that divide the execution of tasks between various cores. In case there is some emergency, the extra four rapid cores will start performing the execution and adjust themselves as per the performance requirements.

Last on the list is Deca-core, which has ten individual cores. These processors are developed to manage heavy tasks and allow them to work in the background while the user works on other applications. These types of CPUs are faster than any other processors present in the market. Even the latest Apple M1 Pro and Max chips use ten-core CPUs along with a ten-core GPU. Some of the flagship smartphones have deca-core CPUs in them, which makes them perform better than any other smartphone.

Now, apart from these, there are 16 core processors such as Intel’s core i9. 32 core CPU from AMD with the Threadripper lineup. These are considered to be high-end CPU processors, and when you are looking to build a server, these are the ones you need to install.

The Need for Multiple Processors

A single core has performance constraints, and increasing the clock speed can boost performance up to a certain point. But, on the other side, we have to deal with the heat, and this isn’t going to give us the results we desire in the end. As a result, in order to expand a server’s processing power, the processor capacity must be increased. This issue has led to the invention of multiple processors, multiple cores, and multiple threads, which are present within each core.

Custom server configuration demands are difficult to meet. As a result, you’ll have to make your own. The CPU, as well as the model and type of CPU it contains, is the backbone of any server. After obtaining a good CPU for the server, the amount of RAM, storage, and other components required to make the server run must be added.

Note:- One thing which a user needs to keep in mind is that a dual-processor server comes with a necessary latency. The latency only happens when multiple tasks require the same data sets. So, in order to share the resources efficiently and to avoid interrupting each other’s processes, the memory has to be non-unified in nature.

Which Server CPU will be best for You?

So which server CPU should you go with? Well, we have defined both the single-processor server and the dual-processor server for you. For the most part, a single CPU server will do just fine if you are looking to keep it as a storage device for your video editing backups. But if you are into deep learning and the creation of AI algorithms, then a dual processor is the way to go for sure. The use of core does not depend on how many employees you have in a company, and it depends on what those employees will be doing and how they are going to utilize the performance of a CPU.