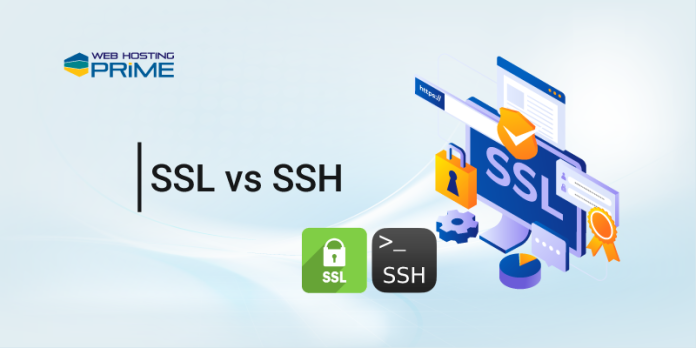 Technology is full of known and unknown terms, and for a beginner, it is quite common to not be able to distinguish between similar terms like SSL and SSH. But SSL and SSH are both technologies, which is something they are both familiar with. SSL and SSH encrypt and authenticate the data that transfers from the website’s server to the user’s device. Both of these technologies are applied to secure the data connection.

Although they are familiar with each other when it comes to usage, SSL and SSH are used for different objectives. That’s why we are creating this article to understand the difference between SSH and SSL, and in the meantime, we will also look at the similarities that they possess.

SSL VS SSH: What Do You Know About Them?

Generally, we know that SSL encrypts the data while it is in transit between the web server and the user’s device. When you see the padlock icon next to the website’s URL in your browser, you will know that the website has installed an SSL certificate. This SSL certificate indicates that the user can enter any sensitive data on the website. But when it comes to SSH, it is used to secure remote logins to another device by creating an SSH tunnel so that the connection that passes through the device and web server stays secure. SSH creates some commands that help you connect to your website’s server using WP-CLI. To know about SSL vs SSH in detail, you will have to explore each of them one by one.

What do you know about SSL?

SSL, or Secure Sockets Layer, is a version of the transport layer security protocol that is no longer in use. When it comes to securing your internet traffic, SSL and TLS are interchangeable. SSL/TLS was developed to secure data transmission between a user’s device and a web server. Data encryption, data authentication, and data integrity are all part of it.

Data encryption: SSL will encrypt the data when it is in transition so that hackers or any malicious elements can’t interrupt the quality of data.

Authentication: SSL authenticates the data to check if it is sent and is received through the right server and prevents third parties from coming between the server and the device.

Data integrity: SSL makes sure of data integrity by verifying any loss or modification of the data while it was in transition.

The SSL or TLS protocol is installed in the SSL certificate, but even though it automatically authenticates the data while it is in transit, it does not request any authentication from the user or the client. To learn about this further, you’ll have to explore how SSL works and what you need it for.

Why do you need SSL?

Moreover, the SSL certificate is a part of the SEO practise where the Google search engine believes that your website is reliable and credible for users. Thus, installing the SSL certificate on your website will increase your chances of ranking on the SERP. There is also a file transfer protocol that works through SSL, and we call it SFTP. It works by transferring the files secretly from the server to the client.

Here are what SSL certificates are used for:

Ssh, or secure shell, is another technology that remotely logs into a device and issues commands. SSH creates a secret tunnel where the connection between the client and the website’s server is end-to-end encrypted. Generally, creating an SSH tunnel requires the user to authenticate the connection using cryptographic keys such as public and private keys or a username and password.

After authenticating himself, the user can securely access information such as website files and databases, as well as administer commands to the remote server via the command line. SSH is a cryptographic network protocol that allows you to easily and securely transfer files between two remote machines over the internet.

Why do you need SSH?

Once you connect to your server using an ssh tunnel, then you can use everything from your browser, literally. You can perform any SSH command on the server if you understand the commands. For instance, you can use WP-CLI to work on your WordPress website and WordPress plugins after connecting your site with SSH. SSH commands allow you to apply updates to your site and manage the content, among many other things. No matter what hosting provider you are working with, WP-CLI is installed by default.

But apart from using SSH to help you manage your server using the command line, there is another reason why SSH is an essential tool for your website. We have told you before that the SFTP or SSH file transfer protocol is integrated with SSH and allows you to connect to your server through SSH tunneling and manage the files using the file transfer protocol. SSH has an advantage over SSL, which is that when you use SSH to link to the web server, you can run the SSH commands and perform any task that you are unable to do with SSL.

SSH in network security is used for these purposes:

The key difference between SSL and SSH-

There is one small difference in how SSL and SSH work: with SSL, you can create a secure and strong connection between the website and the user. But SSH only constructs protected remote links between two devices over the network, which is not so secure. Another difference is that SSL works with the public key infrastructure and creates digital certificates. But SSH does not create any digital certificates of that kind and only focuses on data transactions. If you are using SSH on your website, you won’t have to implement a certificate because SSH has its own public and private key pairs and sends the keys to only authorised users for secure logins. Have a look at the below chart to compare SSH with SSL to make a decision:

Because they are both used to create secure connections, SSH and SSL have a similar appearance. However, SSL is used to encrypt data passing through the web server, and SSH is used to securely connect two remote machines. SSL protects your users’ private information, and SSH allows you to issue commands and control remote servers’ files. So, whether you want to use SSL or SSH is entirely dependent on your needs.

Use SSH if you want to manage files via SFTP and remotely access your website’s database. However, if you want to secure your internet data transmission, you can easily obtain an SSL certificate from your hosting provider.

MySQL vs MySQLi: Which One Performs Better?

SSL vs. TLS: Which One Should You Choose?

Difference Between JPG and JPEG