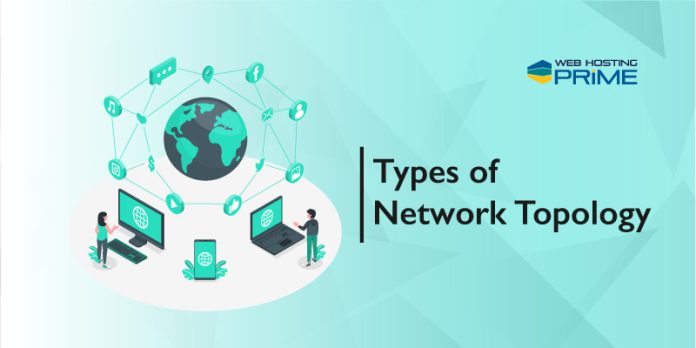 If you’ve been residing in the world of computers for a while, chances are you might have heard the term “network topology.” A computer network’s arrangement featuring nodes and connecting lines through the receiver and sender is known as the “network topology.” Here, in this article, we will give you a thorough idea of the different types of network topology. So, read on.

First, we have the mesh topology. Here, each device is linked to another device utilizing a certain channel (links).

This topology gets its moniker from the fact that it creates a ring-like formation linking devices with their immediate neighboring devices. Repeaters must be utilized for ring topology with a massive number of nodes. It’s because if you wish to send some data to the last node of a 100-node ring topology, the data has to pass through 99 nodes before finally reaching the 100th node. Thus, repeaters are a must to avoid any unfortunate data loss.

Such a transfer is typically unidirectional but can become bidirectional by utilizing two connections among every network node. It is known as the dual ring topology.

The below operations happen in a ring topology:

The bus topology comes next. Each PC and network device is connected to a single cable in this topology. Because this topology lacks a bidirectional transmission feature, data can only be transmitted in one direction from one end to the other. Furthermore, bus topology is a multi-point connection and a relatively weak topology because it runs the risk of collapsing entirely if the backbone fails.

In this network topology, all involved devices use a cable to connect to a single hub.This hub is the central node, and every other node stays linked to this central node. The nature of the hub could be passive, that is, not an intelligent hub; take broadcasting devices, for instance. On the contrary, the hub could be an intelligent hub that is called an active hub. Active hubs are known to contain repeaters in them.

Pros of this Topology

Cons of this Topology

Tree topology is a variant of star topology. It comprises a hierarchical data flow. Hence, in this topology, several secondary hubs stay linked to the central hub possessing the repeater, and the data flows from top to bottom or bottom to top.

As you can see from our article, no network topology is perfect. Each topology has its own advantages as well as flaws. So, deciding which topology to pick depends on the size and needs of your network. Now, it’s a known fact that the more cable a network topology needs, the more time it takes to configure. From that aspect, bus and star topologies are both lightweight and easy-to-configure, while mesh topologies require more cable and effort.

Also, twisted-pair cables are far cheaper but possess less bandwidth than coaxial cables. Fiber optic cables have top-notch performance and transfer data way faster than both twisted-pair and coaxial cables. However, they are costlier as they demand extra elements like optical receivers. So, what kind of wiring you should opt for depends upon your needs.

Another significant factor to consider here is the installation cost. It’s pretty obvious that more complex topologies would need more time and money. This only gets boosted if you start combining different components, such as using costlier cables like fiber optic cables in a more intricate network like the mesh topology. Therefore, you must achieve a perfect balance between installation and operating expenses and the performance level you seek in the network.

The last factor to consider before opting for a specific type of topology is scalability. If you visualize your company/organization and network growing and you want it wholeheartedly, it is best to pick an easy-to-modify topology, as it would save both your time and nuisance. As star topologies help users easily add, get rid of, or modify nodes, causing little to no disturbance to the rest of the network, they are very commonly used for such purposes. Compare that to ring topologies that have to be fully offline before any modifications are made to their nodes, and you will understand the big difference. So, once again, your needs are of the utmost significance here.