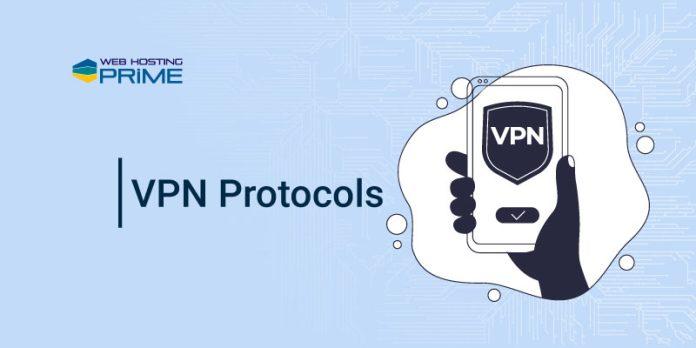 The first time you connect to the internet, you will hear many people telling you that you should use a VPN to be more secure online and protect your data. Maybe you are wondering why I need a VPN when I am not doing anything wrong on the internet that needs to be hidden. Well, VPNs aren’t just for troublemakers online. VPNs are pieces of software that employ a variety of protocols that help you connect to the internet while hiding your IP address. Click here if you want to know more about what is VPN.

Today, with this article’s help, we aim to highlight some of the most important VPN protocols that everyone using a VPN should know about. Also, we have explained some VPN protocols comparison. These protocols can save you a lot of time when troubleshooting and give you more control over your secure connection. So let’s begin, shall we?

What are VPN Protocols?

VPN and VPN protocols are not the same thing. For example, if you are using a VPN service such as Nord VPN, you are given a choice to select the number of different types of VPN protocols depending on how much privacy you need when browsing the internet.

A VPN works by transmitting your traffic through an encrypted tunnel to VPN servers, which allows you to assign a new IP address to your device. On the other hand, VPN protocols are a set of programs and processes used to form encrypted tunnels. Each of these two is a way to give users more secure, private, and somewhat anonymous internet communication.

Keep in mind that no VPN protocol can provide you with complete anonymity. Each one comes with its own set of vulnerabilities that are documented or still waiting to be discovered. So now, let’s go onto the list of VPN protocols and see how much they are worth and what their cons are.

The 5 Most Common Best VPN Protocols

Open VPN is the one that many VPN providers use to make your online browsing secure. This secure VPN protocol runs on both TCP and UDP Internet protocols. The TCP protocol guarantees that your data is being delivered to the receiver and that the data packets present in the transfer are received in the right order. The UDP was developed to provide faster transfer speeds. Many VPN services use both protocols and let you choose which one you want for your data transfer.

The benefit of using the Open VPN protocol is that it is an open-source platform. This means anyone on the internet can check the code to find the hidden backdoors you should take care of. In addition, this protocol can be used with several encryption and traffic control protocols, and you can configure it based on the user’s requirements. Or make it as secure or light as possible. This protocol runs all sorts of encryption protocols. As a result, it is extremely secure. Lastly, with an open VPN, you can bypass most of the firewalls when setting it up for your system.

The only thing we are worried about here is the complex setup you have to get through. If someone with no technical background finds it difficult to set up this VPN protocol on their own, they can use online tutorials; however, we still prefer a much simpler setup for VPN protocols.

This is a layer two tunnel protocol. It is a well-known protocol and a successor of the now deprecated PPTP, which Microsoft and L2F developed. The thing is, L2F was not providing any form of encryption of data or privacy when you were using it alone. When using L2TP, you will see it comes with a bundle of protocols, and the most common one is IPSec. Once you implement these two in combination, they become the most secure way to browse the internet. Keeping all of your data private and providing constant high-speed VPN connections. The L2TP uses AES-256 bit encryption and has no known vulnerabilities.

L2TP uses the IPSec tool, which provides users with mobility and multi-homing protocols. This ensures that even when you switch between multiple connections, you still get the security and anonymity from your VPN protocol. As a result, it is the most dependable and stable protocol for mobile devices like laptops, tablets, smartphones, and more. When you activate L2TP, it will take some of your bandwidth. But with its implementation of NAT traversal will allow you to connect and use the internet at faster speeds. You will also get the added advantage of penetrating any form of firewall that is blocking you from freely accessing the internet.

L2TP is not compatible with too many systems that are being used today. The compatibility issue isn’t happening when using the Windows operating system. This is because Microsoft helped in the creation of this protocol. But for other operating systems, such as macOS and Linux, you must go for the adapted versions.

Another popular VPN protocol is Secure Socket Tunneling Protocol, which has the added benefit of being compatible with the Microsoft operating system since Windows Vista Service Pack 1. As a result, you are free to use SSTP for increased security for your Windows-based systems. Also, many VPN services provide instructions on integrating the VPN with Windows via SSTP.

SSTP has 2048-bit SSL/TLS certificates for providing authentication and 256-bit encryption. SSTP is also a Microsoft-developed proprietary protocol. But this means you are not allowed to audit the underlying code. Still, most users consider SSTP secure. Moreover, you are getting native support for Windows, Linux, and BSD systems. For Android, macOS, and iOS, you need third parties to make the SSTP work with these operating systems.
On the other hand, SSTP can also help you get through most of the firewalls without causing any form of disruption in your communication. Due to the presence of limitations on seeing the source code of the SSTP protocol, many people are skeptical about its having backdoors in it. So some VPN providers resist using SSTP to provide anonymity to their users. SSTP, at last, is a great alternative when it comes to enhancing privacy while you are surfing the internet.

This protocol is one of the newest VPN protocols and is also open-source. If we compare it to other major VPNs, Wireguard has one of the simplest codebases. It’s fairly easy to set up the service you want and features a much broader range of encryption and primitive capabilities.

The presence of a well-defined short code base and a combination of encryption and primitives makes Wireguard one of the fastest VPN protocols. On the other hand, if you are using a portable device such as a MacBook, laptop, or even tablet, then Wireguard can work perfectly with small devices and allow users to enjoy a faster internet connection speed with encryption. Moreover, when using Wireguard, the protocol consumes much less power than any other VPN protocol. This allows you to have longer battery backups.

If you are using Linux, you don’t need to do anything extra to get your hands on Wireguard, as it is pre-installed on the Linux operating system. This gives your Linux OS an incredible speed and security boost, especially for the internet. One of the best things about Wireguard is that it is available for free for all major operating systems. You can see the source code of this VPN protocol that makes it easier for users to deploy, debug the errors, and make changes to the source to fit their requirements.

Wireguard is still a thing in the process, and you can use it to get yourself secured from internet predators. But the implementation of Wireguard is in the early stages as of now. In some cases, it has failed to provide users with full anonymity. As a result, if you are using it, you will need to find a custom solution that gives you the required security without compromising the speed.

The Point-to-Point tunneling protocol is considered one of the oldest VPN protocols. There are still a lot of places in the network where you can take advantage of secure communication. It is used to encrypt the sent data between the sender and the receiver. With the release of Windows, PPTP has become a well-known VPN protocol as most Windows users prefer PPTP alongside Windows to transfer their data securely. PPTP was first introduced in 1995, and its first integration with Windows 95. PPTP is great for high-speed data transfer, but be cautious. PPTP’s encryption was cracked by hackers a long time ago. As a result, if you are sending something via PPTP, it should not be a confidential or important file, as the hacker could easily see it if they are trying to vandalize your data transfer. The speed comes due to the lack of modern security features that are present in other forms of VPN protocols. It can help you watch Netflix from a different location with ease.

In addition, if you have an old computer and want to make sure that it works on a secure network, then using PPTP is one of your best choices. That’s because PPTP has been introduced for quite a long time, and with years of development, it has now become compatible with lots of hardware. Almost every modern piece of hardware comes with its own support, which allows it to be easy to set up and use.

The IKEv2 is based on a request and response pair protocol, and these pairs are known as exchanges. The requester from the exchange is responsible for ensuring the connection’s reliability. The requester can abandon the connection or retransmit if a response is not received. IKEv2 uses several cryptographic protocols to accomplish the best security in data transfer. Lastly, IKEv2 is based on the Diffe-Hellman (DH) Key Management Protocol.

These are some of the most popular VPN protocols that can help you browse the web more securely and leave no trace online. There is no such thing as a perfect VPN that suits every individual’s needs. To choose the Best VPN protocol that meets your needs, you must determine your requirements and see if the protocol meets them.

What a VPN is Used For?