Home Domain What does .COM Mean? 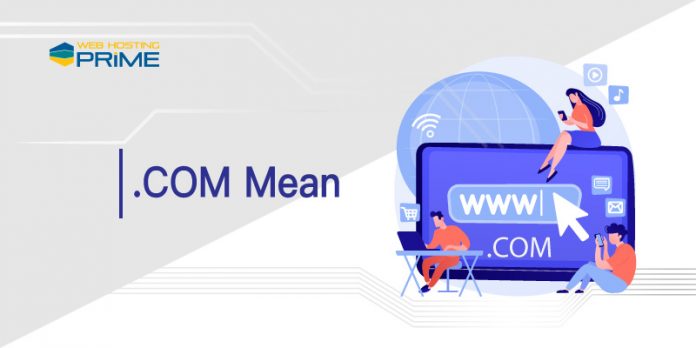 For running a website and making a better brand reputation over the web, an individual must be well-versed with the domain name and its extension. Every web URL is composed of some elements that perform various actions. One such element is TLD or Top-Level-Domain, which is the rightmost part of the domain and is located right after the last dot, such as .com in google.com.

Among the 1200+ TLDs available for various purposes, .com is the most popular one that is used by around 52% of the websites active on the internet. This article contains detailed information about .com along with information about two other widely-used TLD.

A Brief History of .com

The internet was one of the most revolutionizing projects that became possible with the help of various computer scientists and educational organizations. However, as the internet became popular, more and more people started using it. This made the management of the internet highly challenging as routing messages through gateways became nearly impossible.

Jon Postel, the man who honed the internet with the help of a few other members, brought these issues to the University Of Southern California’s Information Sciences Institute and came up with RFC 920 “domain requirements in the ARPA-Internet and the DARPA research community”. Later, they came up with a solution known as TLDs and gave birth to “.com” specifically. The first-ever domain with the .com extension was used by a computer manufacturing company known as Symbolics on March 15, 1985.

What Does .com Mean?

.com TLD is the most used domain suffix on the internet that is used in nearly every popular global website such as google.com, facebook.com, youtube.com, etc. Com is an acronym for “Commercial”. It depicts the real intent of every website over the internet, i.e. stating them as commercial organizations. However, registering the domain with .com TLD doesn’t mean that the website is restricted to commercial (business) use only, an individual can also register the .com domain for personal use.

Undoubtedly, .com is the most popular top-level domain, but other TLDs such as .net, .org, .info, and .edu are also used by several website owners throughout the world. Originally, the domain names were administered by the United States Department of Defense, however, now the domain registrations are managed by Verisign registrars accredited by ICANN.

All of the domain names are backed by registry operators. For .com, it is Verisign that allows the world to connect with the internet simultaneously, from anywhere, at any time of the day. It handles around 226 billion DNS lookups every day. For this, they’ve built a robust and sophisticated server with multiple complexities to meet all the high-volume and real-time requests. They make use of powerful and diverse hardware, operating systems, custom applications, etc.

The main role of Verisign is to ensure the security, stability, and resiliency of .com and .net domains. Also, it performs the root-zone maintainer functions for the core of the internet’s DNS. As mentioned by Verisign, they’re committed to providing an infrastructure that has top-notch quality and brings innovation for addressing the current as well the future needs of the internet users.

The .org TLD stands for “organization” and the majority of the websites using it are run by nonprofits such as charities, NGOs, open-source projects, and educational platforms. It is also a very old extension that was established around 1985 and therefore, it has more credibility over various newly launched alternatives.

This top-level domain is intended to be used by non-commercial organizations and it has become exclusive for nonprofits only. But this restriction was eliminated when the registry was sold to an investment firm in August 2019.

The difference between these two TLDs is crystal clear. One of them (.org) is known for the usage by non-profit organizations while the other one covers all the commercial websites. However, in certain cases, when .com is not available for a specific domain name, businesses look for other options to reduce their costs. As a result, out of millions of .org domains registered, a considerable number of them are used by websites that belong to commercial businesses.

.net is the second most popular top-level domain after .com that is widely preferred by users as an alternative to .com. It is observed that 4% of all global registered domains end with .net extension, which stands for “network”.

Typically, websites that offer services such as web hosting, databases, or collaboration tools use .net because it sounds obvious to them. If using .net, always ensure to add TLD (.net) with your branding efforts so that the audience always searches your domain name along with the .net extension instead of .com or .org.

The basic ground of difference among .net and .com domains is the purpose. Use the .net or “network” extension if you want to serve users with internet-based services or networking platforms, such as forums or online communities. Whereas for commercial purposes, it is suggested for users to buy a .com domain name.

The ever-growing usage of the internet results in the release of various top-level domains. One of the most popular and widely used TLD is .com, which stands for ‘commercial’. It has nearly 1200 alternatives and among them, only two are popular, i.e., .net and .org. Learning about these top-level domains will help you to decide which one to use for your website.

How to Get a Free Domain Name?