Home Linux What is Linux Used For? 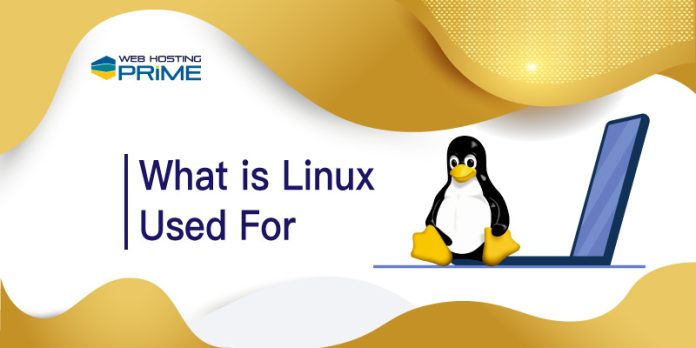 On a daily basis, organizations use a variety of software and technologies to carry out their operations. Only a few successful organizations, on the other hand, can articulate what their systems entail. Over time, the Linux operating systems have gained popularity among both personal and commercial users.

Prior to a few years ago, Linux was primarily used for servers and was not considered suitable for desktop computers. However, in recent years, its user interface and ease of use have steadily improved. Linux has now reached a point where it can effectively replace Windows on desktop computers. Every day, hundreds of thousands of people use it all over the world. The top nine reasons for this are as follows.

What is Linux? Brief Overview

Linux is a free and open-source operating system, and just like any other operating system, it is made up of a number of software components. They collectively manage hardware resources and allow users to perform things like accessing the web or editing a text file in a text editor.

Since Linux is open-source, individuals can use, copy, study, and modify it in any way they like. In comparison, Microsoft Windows is a closed-source operating system. Let’s have a look at some of its advantages:

What is Linux used for?

There are many websites that we visit on a daily basis that run on Linux, and in order to build one, one must use the same. Perhaps more intriguing is the use of a Linux-based web server, such as Dreamhost, to run your own personal RSS reader, Tiny Tiny RSS, or your own Dropbox clone, OwnCloud.

Of course, these could be hosted on Linux at home. It’s a little more involved, but it gives you complete control over the data rather than entrusting it to a third party.

A dedicated Linux box might be a better alternative that saves individuals from leaving their computers on 24/7 merely to transfer files or download torrents. You may build a home server out of an old PC or a cheap new one that keeps backups, streams movies and music, seeds torrents, and performs a variety of other functions silently in the corner. Nas4Free, FreeNAS, and even Ubuntu can be used to build one.

Nearly every individual in today’s world has at least one smart device that they use daily. Linux distributions expand the capabilities of these devices, providing a plethora of additional features. Linux has enabled greater software scope and increased multimedia functionality, whether it be on a smartphone or a tablet. As a result, you get more robustness and functionalities to have a better experience.

The gaming market is constantly improving, which gamers appreciate. Even if some people are unaware of the changes, this is a fantastic solution to what Linux is used for. Linux is used to build the operating systems for some of the most popular games, resulting in better support services and gaming device performance.

Every network understands that in order to thrive, it must keep up with technological advancements. The embedded devices used in the telecommunications industry are a prime example of this. Linux is installed on the vast majority of network devices due to its ease of configuration. Additionally, Linux platforms improve subscriber accessibility and disseminate network transmissions. Furthermore, by deploying Linux in firewalls, a network’s information is more secure from unfamiliar systems.

In terms of security, Linux users provide more advantages when compared to Windows or Mac OS. Unlike proprietary operating systems, Linux has security integrated into its core design in numerous ways.

The increasingly popular open-source operating system has a lot of freedom, is flexible, and allows anyone to fix bugs. Linux operating system architectures and components make it more difficult for malware to spread and prevent systems from getting exposed to malicious attacks.

This is Linux’s most obvious and popular application—and one of its best. If a computer or even a laptop is running slow and underperforming, then another OS isn’t ideal to use.

Instead, installation of a lightweight Linux distro (like Lubuntu or, if you’re a bit savvier, Archbang) will be a better idea as it offers a faster and brand new experience once again. It will be able to offer a lot of things the Windows system can’t, and you’ll be able to perform far more actions.

You’d be surprised at how much you can get done on Chrome OS. There are a lot of great Chrome apps out there for editing audio, video, images, coding, and more—but sometimes you just need a more powerful desktop app that you’re familiar with. Luckily, you can install Linux alongside Chrome OS easily and get access to a traditional desktop with a bunch of apps. It won’t get you Photoshop or something of that caliber, but if all you need is a bit of a safety net, it’s perfect.

You’ll be amazed at how much you can accomplish using a Chromebook with Linux. There are many wonderful Chrome apps for producing music, video, photos, scripting, and more—and those, mixed with more capable desktop software, can do wonders.

Fortunately, you can easily install Linux along with Chrome OS and gain access to a regular desktop with a variety of apps. The best part is that you’ll be able to have extra security with the same.

Why is Linux so successful in the enterprise?

One of the biggest reasons for Linux’s success is its versatility and open-source environment. With a wide range of distributions or “distros” available, users can transfer it to almost any computing platform possible.

Furthermore, Linux is extremely cheap. Initially various businesses were uninterested in the free version of Linux because they lacked trust in it, but the low-cost commercial version was too appealing to pass up. Even more importantly, Linux can run on commodity hardware, making it affordable for small and medium-sized businesses to use.

Many Linux distributions on the Internet have been up and running for years without the need for a reboot. These features will ensure that Linux remains in the enterprise for a long time. So, whether you’re a sysadmin or a network administrator, learning about it or getting started with it is a good idea.

Linux has something for everyone, whether you just need a stable operating system or a full-fledged platform for your group or organization.

There are numerous other underutilized ways to use Linux that you may discover on the fly. Because it is a high-performance operating system, the advantages it provides are becoming increasingly important over time.

How to Check Python Version in Linux, Mac, & Windows