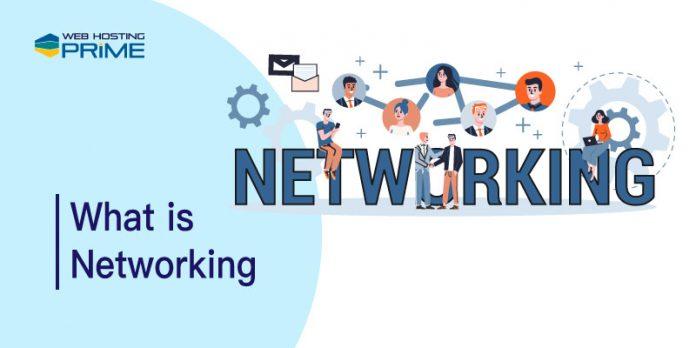 We all have been using the Internet for quite some time now. Even as you are reading this article, you are currently using the internet, which is simply a network of connected computers. If we go for a simple definition of a network, we can say it’s the basic way for two computers to communicate with each other through a shared medium. Networking as a whole is a vast subject, and it includes several things like network management, maintenance, and operations in addition to design, construction, and the use of the network.

Through this article, we will shed light on the different aspects of networking and how it is helpful for both individuals and enterprises.

The computer network, in simple terms, is a web of computers that enable devices and endpoints to be connected via a local area network (LAN) or the internet network if the devices are not physically close to each other. Networking could be anything that allows you to communicate with different systems and make it easier for you to share the data. Even a telephone call or a text message sent on Whatsapp is a type of computer networking. In addition to this, videos that you stream on your favorite OTT streaming services are also a part of the networking service. These different networking services converge as a form of communication called the Internet Of Things (IoT).

The human intervention in networking has to do with the management of the network. The skill required to handle and operate a network directly relates to the complexity of the network. For example, an enterprise-based network with hundreds of computers connected via nodes requires a skilled network administrator to keep the network running at an optimal speed without sacrificing the security of the network.

Given below are some of the most common types of a computer network with their definition and usage.

Just from its name, you can easily guess that it is a network that is limited to a particular area. In most cases, the computers that are a part of the LAN network are connected via physical cables and from the switch. You can find LAN networks in schools, offices, and even at homes with multiple computer systems.

If you want to have a network all for yourself in your workplace, PAN is the networking solution for you. Your device will play the central role of the network and control all the other devices connected to the network. The PAN includes your second screen, printing device, faxing machine, and similar devices like these.

The WiFi that you use at your home to connect with the internet and other smart home devices is a typical example of a Home Area Network. Everything you have at home, which can exchange data with one another over a network comes under HAN. Devices like the smart fridge offered by Samsung fall under the category of HAN device.

A wide area network is used to cover a much larger geographical area. One of the common examples of WAN is a bank’s cash system that is connected to the ATMs present across the city. When the cash in the ATMs is low, the bank gets the information so that they can be refilled with the cash at the earliest possible.

A MAN is a network that is stretched across various regions of a metropolitan area. A MAN is also a series of connected LANs presence across the metropolitan city. MAN, in some cases, is also connected to the Wide Area Network for better connectivity.

Companies like Cisco, Microsoft, Intel, Facebook have their private network on which they send and receive files and work in collaboration with teams located in some other state, country, and continent. Such networks are identified as enterprise private networks.

Internetworks are the ones that connect several different networks together to build a much larger network. Internetworks is used to create a global network.

The GAN is a network that is spread all over the globe. The internet is the most common example of the global area network.

A VPN is a secure network of point-to-point connections between two network ends, such as nodes. It helps establish an encrypted channel that keeps the user’s identity and access credentials along with the transfer of data hidden so that hackers and malicious websites could not track them down.

How does a Computer Network Work?

Computer networks work on nodes that are computers, routers, and switches connected via cables like optical fiber cable, or in some cases, connected using a wireless connection. All the networks follow some protocols that help to establish a communication channel for devices to share information and resources.

Each device that is connected to a network has its Internet Protocol address, which is a string of numbers that uniquely defines the device and allows other users to recognize it in the network. Routers work as bridges between network connections. They determine the best way possible for the data to reach its destination. On the other hand, switches create connections between different nodes inside the network.

The Future Of Computational Networking

In terms of technology, networking connects a system of computers so they can share information and data files. The internet is just one type of networking service and we see innovations in the field of networking quite frequently. In recent years, the internet as a whole has moved to the cloud system. Meaning all the information you want can be accessed via the internet but the information is not stored on a single server or machine. Ten years ago, if someone would have said that you can start your car with your mobile phone, you might have considered that a joke, but in 2022 it has become our reality.

To be honest, IT’s world is ever-growing, and we can’t tell you what will happen in the next ten years or even in the next two years. But we can conjure some predictions by looking at what we have right now. Let’s look at some of the networking trends which will expand shortly:

WiFi 5 uses a 3.5 Gbps speed connection and WiFi 6 can go all the way up to 9.6 Gbps. The increase in the data transfer speed has tripled when going from one generation to the other. In the next few years, we can see WiFi 7 being launched for worldwide usage. It will have all the functionalities of WiFi 6, but in addition to these, WiFi 7 will allow sending of data over several frequencies simultaneously. It can use two to three bands simultaneously and further increases the speed with which the information can be sent over a wireless connection.

There are no doubts about 5G being the hype word of today’s tech industry. But the widespread use of the 5G technology is still far away. While we are writing this article, the Verizon mobile company can provide a data connection that can indeed be considered a 5G connection. Verizon can provide 723 Mbps of speed on their cellular networks, and other cellular networks are catching up to it. In the coming years, we can see 5G as a more personal network, and it becomes the backbone of the different IoT services. But right now, we have to live with 4G connections on our mobile phones.

What are the Different Computer Networking Components?

Computer networking components are the physical and the virtual parts that are required for creating a network. Some of the critical network components are explained below. Depending on the type of network you are using, you might need some or all of them. For example, when you are using a wireless network at your home, you don’t need to attach ethernet cables to your machine to access the internet from it.

It’s a card that is used to connect one computer from another onto a network. All the Mac addresses which you need for your computer device are encoded in the network interface card, which is assigned by the IEEE to identify the individual who is using the network card. The MAC address is stored in the programmable read-only memory (PROM).

A hub is a physical component that divides the network connection among different devices that are connected to it. When a computer requests to access some information from the network, it sends the request to the hub. The hub will then broadcast the request to the whole network, and all the devices will check if the information is stored in them or not. If not, then the request will be dropped. Hub limits the amount of communication between the connected devices.

It connects multiple devices on a computer network and is an essential hardware component of the network. A switch is the upgraded version of the Hub. It has all the features that Hub offers. The switch has its own table, which decides whether to transmit the data or not. It also doesn’t ask for the information. It directly reaches the suitable device and asks for permission to send the data to the device.

A router is the one hardware component you need to perform different networking tasks. It is used to connect LAN with an internet connection. Also, it is used to send, receive, and analyze the incoming packets.

Lastly, we have cables for establishing a physical connection between a computer and other networking devices such as a hub, router, and switch. Its primary usage includes the transfer of media and other files at a much faster speed than a wireless connection.

Computer networking is a vast topic, and to master networking, one needs both time and patience. With dedication, one can understand the working of a network and all of its important aspects. We hope a lot of your doubts and questions about networking have been cleared and answered, respectively.