Home Networking What is POP3? 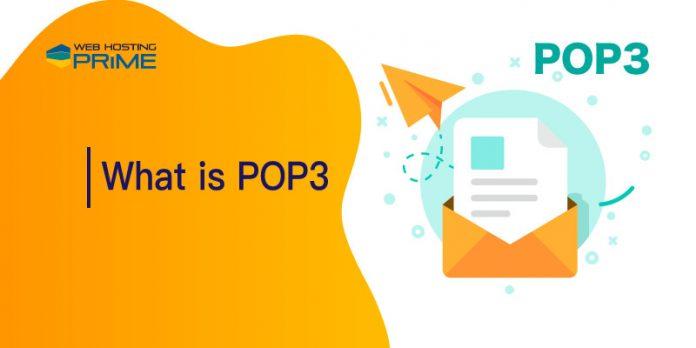 POP3 – Key Information Worth Knowing About The Email Protocol

The majority of internet users having email accounts might have in all likelihood resorted to some specific form of client email software such as MS Outlook for accessing and managing their emails at any given moment. For the purpose of retrieving emails, the clients will need the Post Office Protocol (or POP3) to be configured. Once POP3 is put into effect, it is possible to download messages from the server.

In this article, we will take an in-depth look at the identity of POP3 and its method of working.

How is an email transmitted and received? 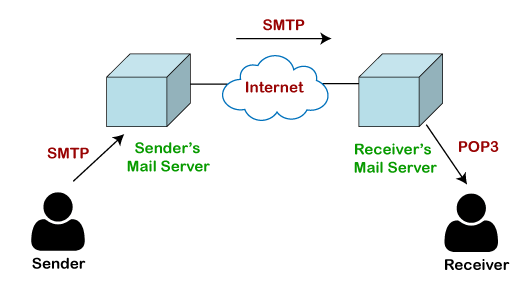 It is a standard email protocol that is used for receiving emails. It directs a locally placed email client to receive emails from a remotely placed server. POP3 enables a local computer in downloading email messages and accessing and reading them even when the computer is offline.

It is to be kept in mind that by resorting to POP3 for setting up a connection with an email account, messages can be locally downloaded from the email server. Once the download is over, they can be removed. This implies trying to access an account from various locations may be problematic. But, at the same time, POP3 facilitates storing messages on a local device, which, in turn, helps reduce the space taken by the given email account in the web server.

POP1 is the first version of POP. The Internet Engineering Task Force published POP1 for the first time in 1984 as RFC (Request for Comments) 918. At that point in time, software developers discerned the need for designing a simple yet effective method to get emails back from a server. They also realized the benefit associated with the offline reading or emails instead of always gaining access to the mailbox online.

Next, the POP2 version was set afloat through RFC 937 in the year 1985. It subsequently had a replacement with POP3 in the year 1988 through RFC 1081 publication. In the following decade, POP3 underwent several revisions. In 1996, the most refined version of POP3 was brought into being through the publication of RFC 1939.

It is important to note that even though POP3 has been refined and enhanced several times, its developers stuck to retaining the protocol’s basic simplicity. The mail retrieval by a client from the server is accomplished in three distinct stages. Since POP3 is very simple and straightforward, it has garnered widespread popularity as one of the most effective email retrieval techniques.

The original POP3 version was only backed by a username/password login process without any encryption. At present, POP3 is supported by manifold authentication mechanisms to provide different layers of protection against hacking and scamming of emails by cybercriminals. The safeguard is mostly offered by POP3 extensions. Clients working on POP3 protocol are propped up by SASL authentication methods through AUTH extensions.

POP4 version exists as well. However, it is just an unofficial proposal held up by features such as:

But, its development has not seen any progress since 2003.

POP3 works by establishing a connection between the server and the client. POP3 enquires the client about the username. In case the username is already residing in the POP3 server, an “Ok” message is sent. Next, it asks the client for the password. Once the password is known, it is set to the POP3 server. The server sends an “Ok” message again, once the password matches. Now, the connection between the client and the server is set up and the list of emails residing on the POP3 email server is visible. The user gets an idea of the number of emails in the mailbox and their sizes. Once the list is accessible to the user, he/she can start retrieving the emails. 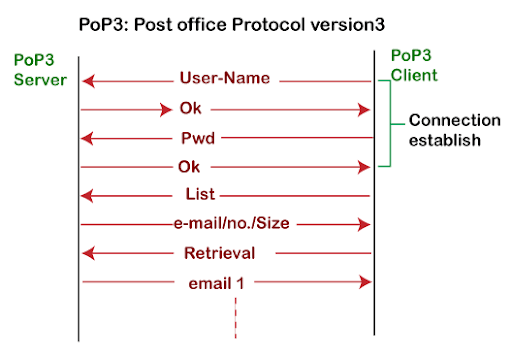 After the client has retrieved all emails from the POP3 server, they are ideally deleted from the server. So, it is evident that the positioning of emails is limited to a single computer and it may not be feasible to access the emails from another computer. This limitation can be trounced through special email configuration settings that help keep a copy of the email inside the server.

The POP3 version is highly innovative and sophisticated. So, even though the fundamental design of POP3 prompts it to delete an email from the server after it is downloaded by the user, these properties allow a few administrators to design and implement the protocol in a particular form for storing emails on the server for a definite time period. This helps allow the user to download the same email multiple times as per his/her requirement inside that stipulated time frame. Thus, POP3 can be looked at as offering an email “store and forward” service.

But, as a matter of fact, this practice is not really viable for most email recipients.

POP3 is designed for the email deletion on the server-side no sooner than the user has downloaded it.

Even though IMAP, an alternate protocol for retrieving emails, is used by many email servers, POP3 is much sought-after by the vast majority of email servers because the protocol is simple, can be effortlessly configured, and capable of receiving emails with a high success rate. Albeit, the most recent version of POP comes up with numerous features only at its basic level, still, email specialists prefer POP3 because it is capable of doing its job with minimal errors.

How does POP3 work with email applications?

It is to be noted that POP3 comes up with a basic method to store and retrieve emails. It is compatible with nearly all email programs, assuming it they are configured for hosting the protocol. Several widely accepted email programs, for example, MS Outlook, Eudora, etc. are designed by default to perform seamlessly with POP3. All POP3-supported mail servers carry different addresses.

These addresses are typically provided to users by the web hosting companies they collaborate with. The email program requires this address to be incorporated so that it can be successfully connected with the protocol. In general, email applications, for the most part, utilize port 110 to get connected to POP3. The software professionals who do the configuration of email programs for receiving POP3 emails are also required to enter their username and password for the sake of receiving emails successfully.

What are the differences between POP3 and IMAP protocols?

The Internet Message Access Protocol (IMAP) is also another email protocol used to access emails residing within a remote server by a locally placed client. Both POP3 and IMAP are extensively used to retrieve emails. Also, the two protocols are likewise reinforced with ultra-modern clients and servers.

While POP3 is accessible just from a single application, access via IMAP can be done through multiple clients. This is the reason why IMAP is preferred over POP3 when accessing emails from different locations becomes necessary. Even IMAP comes useful when the same set of messages is handled by many users.

Differences between POP3 and IMAP

Pros and Cons of POP3 protocol

So, it is evident that even if POP3 is all over the digital space since the 1980s, it still continues to be one of the most popular and viable email protocols. It helps preserve emails on the computer of the client. In doing so, it allows users to read emails while being offline. The server has limitless storage capacity.

On the flip side, one must ensure security threats because of potential virus attacks are eliminated.