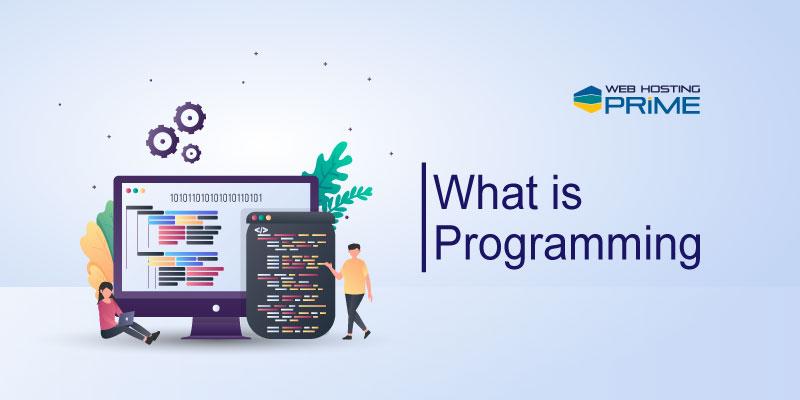 Computers are dominating in the 21st century, and they run on programs. Learning computer programming allows you to tap into the power of computing systems, as well as grab more employment opportunities.

Information is communicated to computing devices through computer programs and computers carry out duties according to the same. They instruct devices to perform computations, video games, analyze large amounts of data, or even drive a car. This blog will walk you through detailed programming information and will also cover all the important aspects associated with the same.

Programming is converting an algorithm into a notation for computers to understand and execute. It helps individuals create solutions, applications, software, or nearly everything you use over the Internet. To control computers, computer programmers utilize a variety of languages. Some of the most popular ones are Python, JavaScript, Java, and C.

Programmers begin by writing source code in a code editor or integrated development environment (IDE). This is a set of code written in a programming language that can be read by other programmers.

Are Programming and Coding the Same Thing?

Even after having different definitions, programming and coding are often used indiscriminately. Have a look at how they’re different from each other.

For a few decades, humans have experimented with several programming languages to figure out how to best connect with computers. Programming has progressed from punch cards with rows of numbers that a computer reads to a drag-and-drop interface that expedites programming with a variety of additional approaches in between.

If you understand coding, you can find plenty of work in the huge world of technology. Programmers are in high demand throughout the world. Individuals can freelance, work on personal projects, or utilize their coding skills to help startups, etc. Programmers’ salaries are also appealing because they involve critical thinking and situation analysis.

Learning programming is all about breaking down issues into smaller bits, utilizing logic and algorithms to develop and provide a solution. Coding pushes the brain to think thorough end-users about a problem, organize the thoughts, apply logic, and finally come up with a solution. Individuals have to apply their knowledge every time they develop something, and can also invent their own rules to catalyze the process.

3. Technology Has Taken the World by Storm

Technology is ingrained everywhere, and there is no question that it has become an integral part of our lives, whether it is for entertainment, communication, or travel. The whole world is relying on technology, and tens of thousands of businesses rely on computer software to manage their operations. From making an app or website to driving a car, it is utilized in data analysis, finance, food business, teaching, customer support, etc.

4. Ability to Work From Home

Employees will have the option to work remotely because their job only demands a computer with an Internet connection. With that being said, it is dependent on the company’s policy, but many do provide this option. Furthermore, individuals can opt for freelancing and work from home at any day-anytime.

Programming is a widely desirable job for people who wish to combine their work and family lives and believe that commuting wastes valuable time that could be spent elsewhere.

Some of the aforementioned languages are specialized for a specific field of development, while others are more general-purpose. JavaScript is mainly used in web development, and it is typically the very first programming language that new web developers learn. JavaScript can also be used in the production of mobile and video games.

Python can be utilized for data analysis, machine learning, and web development, among other things. Programming languages are classified into several categories and a list of some of the categories can be found below.

Because there are too many, the aforementioned list doesn’t cover all of the software models and languages available currently. However, this should provide you with a solid introduction to the various sorts of programming languages that exist.

What Computer Programmers do

Computer programmers use languages including JavaScript, Python, and C++ to write code. They employ multiple languages based on their primary area: web design and development, mobile app development, software development, and so on.

Proficiency in one or even more programming languages isn’t enough for computer programmers. They must also be able to debug and manipulate codes. Programmers have to go through various complex steps mentioned below:

Comments are the statements that start with /* and end with ‘*/’. Although comments are not required, it is a good practice to use them because they increase the code readability. A program can have as many comments as it requires for ease of understanding.

Programmers utilize printf(), scanf(), and other terms, statements, and functions when developing the code. The program must include the file containing the definitions for these functions. Every code uses a library such as stdio.h that is used to read data from the terminal and display it on the interface.

In the given code, the printf function is used a few times. Whatever you type inside double quotations will be printed exactly as it appears on the console. You could also use printf to show the values of variables and pointers utilizing the format specifiers like %d, %c, and %p.

The scanf function is being used to receive user input. When you execute this program, it listens for user intervention (age), and once the user provides the input, the rest of the statements are processed based on the age entered by the user.

It’s the place where all C programs begin. This function starts the execution of the C source code.

As programming becomes more prevalent in our daily lives, everyone should have a basic understanding of what it is and how it may be applied. Coding is a talent that will take anyone far in life, whether they want to create a mobile app, work with a database, or program a robot.

Always keep in mind that computers are only tools. While mastering the program may be difficult at first, if you persevere, you will be able to create some amazing things.