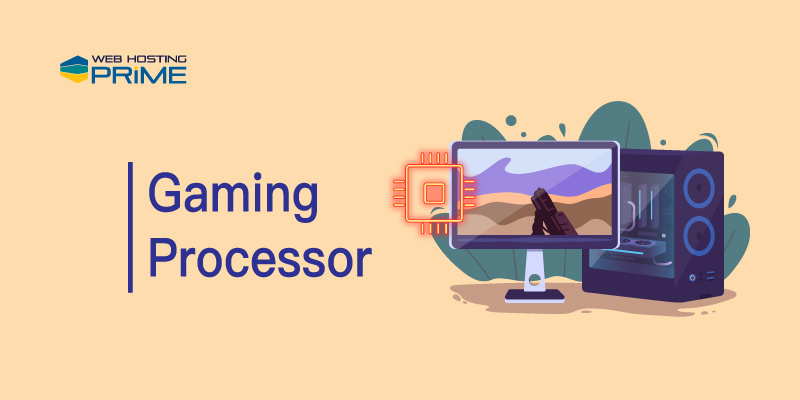 It might come as a surprise to you, but the gaming industry is right now the wealthiest entertainment industry in the world. Millions of people are not afraid to play just one more match till the dawn of the next day. Just the small and growing portion of the gaming market, VR, had reached a market value of 1.1 billion US dollars in 2020. According to reports, the gaming community will see a rise in numbers by 12% CAGR from 2020 to 2025.

These numbers are truly massive, and if you are one of those individuals who are into gaming and looking to boost your system’s performance by purchasing a new processor, then we got you covered with this blog. Today, we will show you how to choose the right gaming processor for your gaming rig. Some features might be of no use to you as a gamer, so you need to steer clear of them.

Let’s start with one of the common misconceptions about processors and gaming. Many people will tell you that you don’t need a high-end processor to make your games run at a faster frame rate. Getting our video games to run on maximum settings has been a priority for a lot of gamers as it leads to a more realistic level of experience along with meticulous levels of detail.

But making a game look at its best is not just switching up a button. Each of the single settings like destruction physics, cloth simulation, and draw distance depends on the system’s hardware quality. Let’s explore how different games take advantage of processors and give a performance.

Total War is a real-time strategy game with some of the most epic battles you will find in a game. The armies are in massive proportion, and each character has its random animation for fighting stances. But to keep up with the animation of so many troops, your computer will have a hard time, and it will cause a frame drop.

Total War is a unique game as it allows maximum scaling. It is left for the user to tweak and play with. Each model of the soldier has been designed with specific details such as animations, interactions, pathfinding decisions, and more.

On the other hand, a processor is always performing the balancing act of juggling several tasks at any given time. For example, if you are playing a video game and streaming it on YouTube. Then the processor handles the recording, streaming, and running of the game on the system, simultaneously.

Let’s talk about the moment when two armies are about to come face to face with each other. There are thousands of soldiers fighting each other, and you zoom in on the camera. In this situation, the processor’s time will be split between entity agent-based combat, collision mechanics, and the building matrix stacks to make all the entities shown on the screen. In simple words, the number of troops that you see on screen and their actions are taken care of by the processor.

In this situation, parallelization comes to the rescue of the processor. It is a process in which the tasks which are given to the processor are delegated to the different cores of the multiple-core processor. As a result, this type of video game scales up its performance based on the number of cores present in the processor of the system. You can quickly deploy more troops in your army with more cores, and the system will work just fine. To showcase the use of multi-core, you can take a look at Dynasty Mode in Three Kingdoms. In this mode, a player can easily crank up the unit count of the troops up to 500%. To have a playable framerate or 60fps, your system needs to have at least a quad-core processor installed.

This is just one of the examples of how processors are responsible for delivering games with high performance. Games like Total War take advantage of both the straight-line performance and multiple core performance of an installed processor to spread the game’s workload.

Hitman is a game that has developed its genre of stealth gaming. The game has been iconic, and with its latest release, we get to see the bustling streets of Mumbai with a heavy number of characters present in a single frame, to high contrast and photorealistic racetracks of Miami. The detail in Hitman 2 is just jaw-dropping, and with a processor of multiple cores, Hitman 2 can give you an immersive experience, and in this section, we will show you how it is done.

With Hitman 2, developers tried to make the game enhance its quality with the additional power which it receives from the use of more cores. This is the statement given by Maurizio De Pascale, who is the Chief Technical Officer of the game.

So when you have a higher core processor, the game will push itself to provide you with more crowd animation, audio, and cloth animation in Hitman 2. Crowds will be much denser, and they will have more visual variety from the very beginning. For example, with higher settings, the people on the streets of Mumbai will have a better cloth animation, and it will feel like it’s a photorealistic image in the first place.

Hitman 2 can go up to 300 NPCs in a single level, but not all of these NPCs receive a full update on every single frame. So if you look closely, there will be a difference in the frame rate of the animations depending on the distance of the main character. With better core counts, the difference in the update of NPC frame rate will be lower. On the other hand, with a high-end processor, games like Hitman 2 will have more particles and shards during the destruction animation. Also, the sound stage will be much greater. If there is a gunshot on the other side of the wall, the room in which your character is will have its reverb. This is precisely how one would hear a gunshot in real life. But with the low setting, the reverbs are not present and thus, resulting in a less realistic experience.

Both realism and immersion play a vital role in enhancing the gaming experience of a user. But to get the most out of these two features of a game, a user needs to have a high-end processor that can handle all these multiple operations at the same time without any bottlenecks. The base and high settings will indeed have identical gameplay, but with better settings, the player will have a heightened quality experience. Thus, developers of the game intended for users to play games at high settings, and with a high-performance processor, one gets to see the true vision of developers.

The benchmarking done here didn’t have dozens of processors to start with, but we do have a fair number of processors which is enough to show the difference between using high-end and lower-end processors in gaming machines. Let’s start with the most popular game which millions of people play every single day with their friends. Yes, we are talking about Rainbow Six Siege.

This game is considered to be quite simple to run, and even a non-gaming system can run it if it has a graphics card installed in it. We compared three processors that have the same L3 cache capacity, and these were Intel-based Core i5 10600K, Core i7 10700K, Core i9 10900K. In addition, we have tested all these three on a custom clock speed of 4.5 GHz. Furthermore, each of these processors has different core counts. The i5 has 6 cores, i7 has 8 cores, and finally, the i9 comes with 10 cores.

The benchmark showed exciting results, and it is pretty similar to the results that we have seen in Zen 3 processors. The Core i7 with 8 cores enabled scored 15% faster than the Core i5, which has 6 cores present inside the chip. The i7 system gave 494 fps compared to 929 fps for the Core i5. But here is a thing to note, with i7, the L3 cache capacity is a lot more compared to the Core i5. In case the Core i5 had the same 20MB L3 cache of Core i9, it would have shown better results in comparison to Core i7. On the other hand, with this test, we learned that the Core i9 with a 10 core processor had only a 6% increase in performance compared to the 6 core i5 processor.

This shows, having more cores is not the best way to measure the power of the processor. In this benchmarking, we found out that a 67% increase of core count results in a 6% performance increase. But a 67% increase in L3 cache led to an 18% increase in performance, proving that having extra space for the cache is quite helpful in such scenarios.

Horizon Zero Dawn was among the best visually appealing games that were released by Sony Studios for the PlayStation console. It is not a processor-intensive game, but still, we can’t find differences in performance by using different processors in the benchmark. All the tests that we performed made no significant difference. In this game, we found out that graphic intensive games are entirely GPU dependent. This is quite common in modern games such as GTA 5, Witcher 3, Call of Duty, and other AAA titles. Even if you are not using the high-end graphics card and running games on 2k, still, it is hard to find any difference in using a better core count processor.

This game has become notoriously a benchmark for finding out how much performance a system packs in. However, not many gamers know that Cyberpunk 2077 has nothing to do with their processor, and all the performance, along with the higher framerate, only depends on the graphical power of the system. In our benchmarking tests, we were able to find out that when we went from Core i5 to Core i9, there was a 15% increase in the 1% low performance. This is not a significant boost in performance, and it’s not due to the rise in the number of core counts. The main reason behind this slight increase is the presence of a larger L3 cache capacity.

With F1 2020, we again saw a slight gain in performance when moving from Core i5 to Core i9, but besides that is due to the presence of an extra L3 cache in the Core i9 processor. The Core i9 performance was 10% faster than the Core i5, even though both of them had the same clock speed. On the other hand, if we limit the Core i9 to 6 cores, then it will have no drop in performance in comparison to the 10 core configuration. In this benchmark, we again found that having L3 capacity is more important than having a higher core count.

So the conclusion is that it doesn’t matter how many cores you have in the processor. It is the cache capacity that can give an extra boost to your gaming performance. As a result, if you make an upgrade from Core i5 to Core i9 or something even faster, the FPS of your favorite games will remain somewhat similar.

We want more cores and caches. With more core count comes better caches, but you can make an intelligent choice and go with a higher cache processor even if it has 6 cores. This will give you a better performance in a much budget-friendly way.