How To Install Python 3 on Windows 10 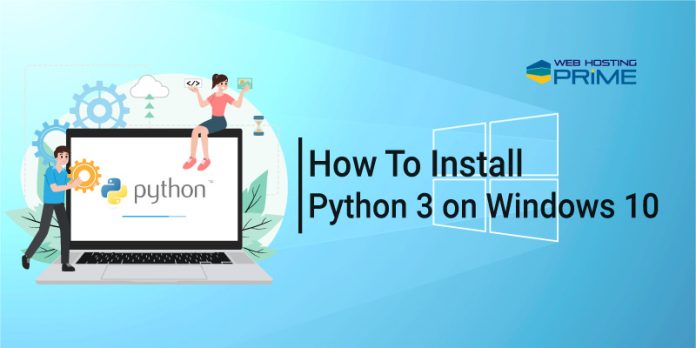 We will be taking the support of the Npn package manager to install the Python 3 version in Windows 10. Also, we are only defining the method to install Python 3 in Windows 10, so if you are using Windows 8 or some other version of Windows, some of the steps might be different, so be careful and read the instructions written below carefully.

In addition to this, Python doesn’t have any copyright. The result is that it is widely used by so many people, despite the constant updates to the programming language. We give you a few reasons why Python can enhance the features of your project and make it easier to develop it.

10 Reasons Why You Need To Download The Latest Version of Python 3 In Windows 10?

There are tons of new features which you will be missing if you are not installing the latest version of Python, which is Python 3. Below we have written some of the advantages of using Python 3 over Python 2 and how the newer version makes developing software easier for you.

1. In Python 3 Print Works As Function

Print used to be a statement in Python 2, but now in Python 3, you get to use the same keyword, which is “print,” but it will work as a function, not a statement. This makes printing lines in Python 3 much more effortless.

In Python 2, when you divide numbers, a value that is less than 0 will be displayed as “0”. In the case of complex mathematical answers where a user needs to calculate the three to four decimal places, Python 2 programming is useless because it does not have a decimal value. Python 3 changed this; now, dividing 2 by 1 will result in 0.5 in float. In case you are looking for a way to use the truncating behavior, please use “//” instead of /.

The recurring problem with Python 2 was its inability to compare two things properly. Even if you write a silly code that doesn’t really make any sense, the program will run, and the outcomes will remain the same, even though you change the input. But in Python 3, you cannot perform wrong comparison operations. When your comparison code doesn’t make sense, you will get the output TypeError. With this, Python 3 has added an extra layer of robustness in its code writing.

If you have worked on Python 2, you know Xrange has the advantage of being faster than range when you are iterating. But if you look at Python 3’s implementation, you will see that both range and xrange works precisely the same. Thus, there is no xrange in Python 3. If you do type in xrange in your code, it will again show you the TypeError as an output.

With the code written in Python 3, your code will have the advanced level of iterable unpacking. Thus, we can perform a number of operations that can’t take place in Python 2.

In Python 2, there are two text inputs present, and these inputsare str and Unicode. If we look at the str type in Python 2, it only takes the input that is written as ASCII characters. Also, Python 2 has a one-byte type known as bytearray. But if we compare this with Python 3, we only get one text type, which is quite similar to the Unicode text type in Python 2. One more thing you need to know is that in Python 3, str is the only text type, which can work with Unicode by default.

When we are working on Python 2, both != and <> operators can be used as inequality operators. But when you are using them in Python 3, only one of them works, and it is !=. So now developers will have less confusion about which inequality operator to choose when writing the code.

We use raw input() in Python 2 to input the data as a string; the simple input() is used to read and store the data type. But with the use of raw_input(), a developer has to be careful of adding quotations. If they are missing from the code, it can perform malicious behavior and will not provide the required output which you are looking for. With Python 3, there is only one input method, and that is input(), and when you type this in your code, it will store the input as a string no matter the data type of the input.

With Python 3, you are always getting the output in the form of iterables when the inputs are in the range, zip, map, and filter format. By contrast, with the latest Python 3 version, dictionary methods such as keys (), values (), and more will produce views instead of a list of results.

Difference Between Python 2 and Python 3

We have given below the differences between Python 3 and Python 2. These differences will make it easier for you to make a decision whether you need to use Python 2 or move towards a newer version which is Python 3.

Steps To Install Python 3 In Windows 10

Step – 1: Check The Version Of Python

To find where the Python is installed in your system, write the following command:

Now that you have seen the version in your operating system, you know whether you need to update it or not. If you want to update to a newer version, you first need to download the official Python.exe installer.

Open the web browser that you prefer and go to the official Python website. After that, go to downloads for Windows, look for the Python version that you want to install, and select the link to download its executable.

Once the executable installer is downloaded, launch the installer and add the path where you want to install the latest version of Python. After that, click on Install Now with all the recommended settings. With all the latest versions of Python 3, you will be getting Pip manager and IDLE by default with the installation. But for the older versions, you might need to install them separately.

When installing Python 3 using an executable installer, you will see a dialog prompt that will ask you to disable the path length limit. If you choose this option, you will allow Python 3 to bypass its 260-character MAX_PATH limit. This will help Python to use long path names.

Step – 4: Check If The Latest Version Has Installed

Once the installation is complete, you need to go to the command prompt and type in the following command to see if the update has been successful or not.

Another method to find out whether you have successfully installed the latest version is by opening up the path where you have installed the Python and locate the python.exe file. Double click on it, and it will open the command prompt, which shows the output of the current version installed on your computer.

As we said earlier, the latest version of Python will include Pip manager, but if you are installing the older version, you need to download and install it separately. You need to perform this step if you have more than one Python version available on your computer and Pip is not installed by default.

To Install Pip, launch the command prompt and type in the following command:

After that, you have successfully downloaded the Pip in your system. Now you have to install it in Python. To install the Pip, use the following command:

Your command prompt will show that it is installing the pip manager and once it’s done, it will show the output Successfully installed pip “version” wheel “version.”

So this is how you install Python 3 in your Windows 10 operating system. You can install it via command prompt, but that method is quite tedious and will require you to have prior knowledge of using Command prompt thoroughly. If your Python 3 version doesn’t come with Pip and wheel, it is recommended to download them separately as you will need them when working on multiple projects and different versions of Python packages.