Home Android How to Update Android OS to the Latest Version? 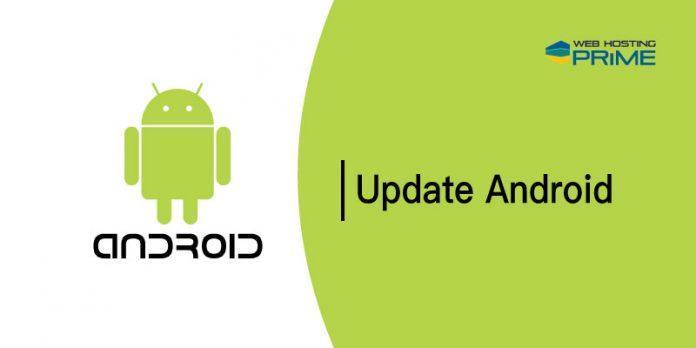 Android is an open-source mobile operating system mainly designed for smartphones and tablets. Officially owned by Google, Android was commercially released in September 2008. We are all aware that Android is the most used operating system around the globe. It is used by several smartphone companies and its simple interface makes it more user-friendly. Read more to know how to update the Android operating system on your device.

7 Advantages of Using Android that You Must Know About!

Before we actually learn how to update Android OS on your smartphone, it’s good to know more about Android and its advantages. Though there are other operating systems, like iOS, that also rules the market, Android still has the biggest market share. Android is open source and powers the highest number of smartphones across the world. Let’s have a look at the various advantages of using Android smartphones:

Android users get more variety as most smartphone brands worldwide use Android as the operating system on their devices. Also, Android is an operating system that is also available on smartphone devices with various configurations available a variety of price options ranging from low to high. Therefore, customers can easily opt for an Android device that suits both their budget and requirements.

The second most important advantage of using Android is that most Android devices have a standardized Micro USB port for charging. Whereas, it isn’t the case with Apple smartphones as their new Lightning connector doesn’t work with devices manufactured by companies other than Apple.

Widgets or self-contained programs are superb features offered by Android as these provide more flexibility and greater functionality to Android smartphones. This is one of the best things about Android. Battery Widget Reborn and Circle Launcher are two of the many Android widgets that help to enhance the overall user experience.

The android operating system allows its users to switch between different types of keyboards like Standard Keyboard, One-handed keyboard, and Floating Keyboard. However, in the case of iOS devices, you don’t get such choices.

Since its open-source, Android allows software developers to work and make changes to it’s source code without any restrictions. This lets Android smartphone manufacturing companies like Samsung, Mi, Realme make modifications to the OS and offer a unique experience to their users while using the same Android OS.

How to Update to the Latest Android Version

If you receive a notification regarding the Android OS update on your device, you can update to the latest version by following these simple steps:

The latest Android version that is available once you update is Android 11. It comes with some super cool features. Have a look at the new feature inclusions available on Android 11.

Android 11 has come up with new features along with APIs for developers. Let’s take a look at these.

In Android 11, media controls are visible near quick settings. Sessions from various apps are aligned in a carousel which allows local streaming and remote streaming like the ones on external devices as well as previous sessions too.

Users are allowed to restart the previous sessions without starting the application.

There have been a lot of improvements in Conversations for Android devices. Conversations are bidirectional and real-time between more than two people and now you can interact with different options available.

It offers different APIs which support waterfall displays that appear near the edge of the device.

It also offers hinge-based screen configurations on various apps for determining the angle of the hinge by offering a new sensor and a new SensorEvent that enables monitoring the hinge angle. It also provides the measurement between the two main parts of the device and these measurements can be used to do granular animations.

Android 11 has come up with better and enhanced privacy features for its users.

In order to make your application data safer, Android 11 has improved biometric authentication to a great extent.

With an easy-to-use interface, Android has captured most of the market and will continue to do so in the future. We hope you found this article helpful as now you know how to update to its latest version along with the feature updates of Android 11.

What Is Mobile Application?