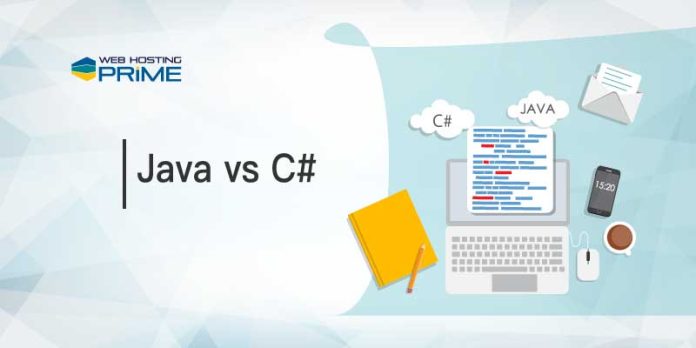 Both C# and Java are programming languages used for application building purposes. But since both are programming languages and come with somewhat similar features, professional developers find it difficult to choose any one between the two. If you are a beginner, you should know that both C# and Java languages are easy to learn, and they are general-purpose languages. That’s why we have created this post to help you pick one between Java and C# after comparing their features and functions with one another.

C# or C-Sharp is an object-oriented and general-purpose programming language created by Microsoft in 2000. The most striking feature of C# is that it runs on the .NET platform and supports Microsoft Visual Studio and native Windows programs. C# is the easiest programming language because it includes simple codes but with modern features. Microsoft updates C-Sharp regularly with new elements so that it supports different important integrations such as integrating it with the R programming language. Microsoft developed C-Sharp to compete with Java because, during that time, Java was ruling the world.

Java was developed in 1995 by Oracle. It is additionally a general-purpose, object-oriented, class-based, and network-centered programming language for developers. It supports numerous implementation dependencies such as connecting two components using concrete classes. Java was popular, but it was not used for web development in the initial stages. In the 90s, Java was specially kept for interactive cable TV. Java’s slogan was “Write once, run anywhere” (WORA) which defines how portable and flexible the programming language is. Thus later, Java expanded its use in Operating System applications and other related platforms.

Noting how similar C# and Java are, it’s important to sort out their differences so that you can make your mind on which one to choose for your application development purpose.

While C# was developed by Microsoft in 2000, Java was developed by Oracle in 1995. But in the beginning, both were great choices for application development on diverse platforms. Application for operating systems and websites are supported by C# and Java but Java is also supported for virtual machine applications. So what are the real differences between these two programming languages? Let’s find out.

Features of C-Sharp and Java

Both C# and Java have similar and different features. Let’s take a quick look:

Both C# and Java languages focus on concurrency and garbage collection that ensures high security. When Java is famous for its portability, C# is famous for its coding simplexity. C# supports different operators for overloading and Java’s code adheres to bytecode that you can perform on cross-platforms without changing the syntax. Java only works on the Internet while C# supports multiple platforms where learners can improve their coding knowledge. C# provides a large library where you can find various solutions that support organizational growth. One more difference between Java and C# is that the former supports checked and unchecked exceptions while the latter does not.

Performance and Scalability of C# and Java

According to experts, C# performs better than Java since its response time is shorter, does not take much CPU resource, etc. However, when you compile Java with Just-In-Time compilers, Java also works perfectly like C#. Due to the multithreading architecture in both C# and Java, they allow the execution of different processes at the same time.

In terms of scalability, none of them has internal scalability but both of them can be scalable if you install third-party applications like Async, Await, NCache, etc. After implementing these third-party programs, Java and C# should allow a large user base to store a high amount of information.

When you know the vulnerability of a framework, you will work better and carefully while writing the code. Java is static and does not leave much room for typos. Its automatic code verification ensures that the codes are correct before you execute them. But Java can be insecure when its integrated libraries or applications are in danger. Also, when you compare Java with C#, you will see that C# is more vulnerable because it comes with SQL and CMD injections but if you read Microsoft’s guidelines carefully, you can beat this issue fast.

Another thing is the popularity that can assist you to decide which framework is appropriate for your business application. Right now, over 9600 companies use Java for their business purposes and 2100 companies use C#. Hence, you can see which is more popular. Also, if you search for jobs related to Java on LinkedIn, you will find some consistent results but .net developers or C# programmers don’t get that many chances. If you are an aspirant programmer, you might want to take this into deliberation.

How Easy or Hard is it to Learn Java and C#?

Both Java and C# are suitable for beginner programmers and easy to learn. However, none of them is as easy as Python. However, some students have complained that C# and Java languages are hard to learn. So, in that case, we would say that both of them are the easiest for coders having a little bit of coding knowledge but if you like the challenge, you can learn C# or Java no matter if you have any experience or not.

Not to mention that Python, Java, and C# have a huge community of learners who would help you with the coding knowledge. Both of them offer libraries and tools that support you with the learning process.

Speed and Cost of Development

Java has an independent syntax that involves IDE compilers like any other platform. But C# was produced to provide the Windows operating system but since .NET Core and .NET 5 are involved in this programming language, it now supports platforms other than Windows. Moreover, C# also allows developers to reuse the codes but Java’s syntax gives it more advantage over C# when it comes to the cost of development. If you are planning on developing a cross-platform application, then you can use Java’s syntax because it uses high processing power and gives more speed. But that means it comes with the possibility of a high price as well. Apart from hardware costs, you will need a dedicated development team that will make sure your project is going smoothly. So, in that case, the cost of application development for both C# and Java is based on the technology you are using and your specific idea of creating a project.

Use Cases of Java and C#

Benefits and Drawbacks of Using C# and Java

Let’s take a look at the advantages and disadvantages of Java and C#.

So these were the benefits and limitations of Java and C#. This will help you determine which programming language you should consider for your business or learning purpose. But before that, you should also consider the relationships between these two. Let’s have a look at them too.

Similarities between C# and Java

The similarities between C# and Java include their object-oriented nature. Both of them support inheritance, polymorphism, and encapsulation. They both get support from C and C++ and both of them offer garbage collection. Plus, when you compare their syntax, you will notice that their languages are syntactically similar. Apart from these similarities, they have differentiation in many fields that we have discussed above.

Which between C# and Java you are going to choose for your project depends on your application maintenance, requirements, usage, and platforms. But if you have the right technology and professional developers then both languages can offer you the best outcomes. You can make the right decision if you have read the guide from start to bottom thoroughly. And when you ultimately choose one, just remember to tell us in the comment section below.