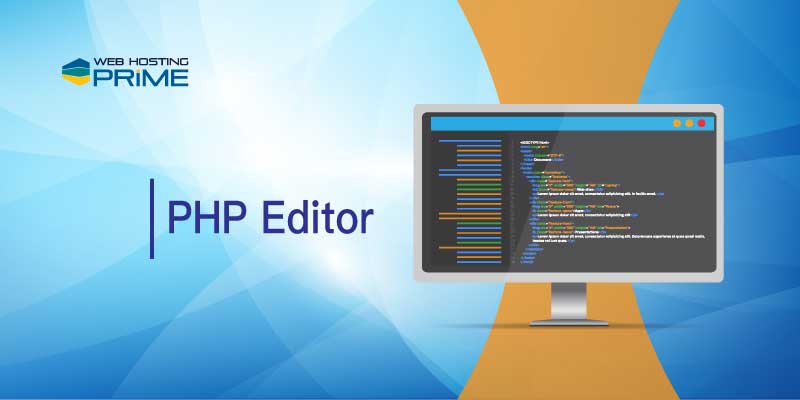 PHP is one of the most popular programming languages and we need a code editor to write high-quality PHP code. Many PHP editors are available in the market, but you need to select one that is powerful and capable of meeting your needs effectively. While some PHP editors are paid, many others are available as open-source and thus are free to use.

In this article, we will discuss PHP and its features, the importance of PHP editors, and list down some of the best PHP editors available in the market. So, without further ado, let’s get started.

PHP has gained extensive popularity and is preferred by many developers to create powerful web applications. PHP has come forward as an open-source server-side scripting language mainly used for creating static and dynamic websites and web applications.

Below are some of the key features of PHP:

Why Do You Need a PHP Code Editor?

For writing code using any programming language, you need at least a basic text editor. If we talk about Windows, the most basic editor available is Notepad. However, it is not good enough for processing the code efficiently. Also, Notepad does not have text alignment and other features that make it easy to write code and make it more readable. That is why developers prefer using powerful and dedicated editors for every programming language.

A modern code editor will highlight syntax, define the code structure, and differentiate keywords, variables, and parameters in the same code. They use several colors and fonts to highlight different sections of the code.

If you do not use an appropriate editor, your code may become less readable, and the chances of having errors in your code increase significantly. To write and edit PHP files, developers require an editor that supports PHP and highlights the code for better visibility. Modern PHP editors come with various tools and features that will help you write and edit code with minimal errors. The editor will automatically highlight the lines having a syntax error and thus will help you save time in finding them.

Some PHP editors come with advanced features like debugging, version control, and code refactoring. Most PHP editors are not hard-bound for writing PHP codes but also support several other programming languages.

Developed by Microsoft, Visual Studio Code is one of the most popular code editors and is available for free. Over time, this editor has gained much popularity and has become the first choice of most developers. It comes with default PHP support, and it also provides PHP extensions that are available for download from the VS Code marketplace. These extensions will help you enhance the functionality of VS Code to make it more suitable for developing complex PHP projects.

Atom is considered to be the hackable editor of the 21st century. It is said to be hackable as developers can customize every aspect of the editor interface like UI, theme, formatting, and language-specific settings as per their preferences. Atom used to be one of GitHub’s internal tools. However, it is now an open-source doe editor managed by GitHub itself. This editor allows you to download packages to add new functionalities.

Brackets is an open-source code editor developed and maintained by Adobe. It has its focus primarily on frontend development like other products of Adobe. However, Brackets also supports backend development with several programming languages including PHP. It has become popular due to its inline editing feature for CSS. This editor is highly suitable for working with PHP projects.

GNU Emacs has been in the market since 1985 and is considered to be a highly stable and well-established editor. It was specially developed for the GNU operating system. It allows developers to customize Emacs’s design and functionality using the Emacs Lisp scripting language. This editor shows support for languages like PHP, HTML, and CSS. It comes with a steep learning curve and is recommended for PHP development.

Vim is also known as the improved version of the Vi code editor that was basically created for Unix systems. It has additional features to the basic Vi code editor like comparing and merging files, syntax highlighting, search history, and spell checking. Vim comes with a text user interface that can be managed using various commands and key mapping. This editor is customizable and extensible.

This is an advanced source code editor that supports various programming languages including PHP. This editor can be run on any operating system (Linux, Windows, macOS, FreeBSD, OpenBSD, Solaris). It also comes with Gnome integration that makes it a suitable PHP editor for your Linux distribution. It was specially created for developers and is equipped with advanced features like Emmet.

This editor is a cross-platform source code editor initially written for JVM (Java Virtual Machine), making it runnable on any OS with a Java Runtime Environment. This editor can be set up fast and seamlessly. jEdit comes with syntax highlighting mode available for more than 200 programming languages.

This editor is the most commonly used editor, which is supported by the Windows operating system. It is considered to be an advanced version of the simple Notepad application. You will get various features in addition to the basic Notepad editor. It is handy and very easy to understand, making it beneficial for developers on Windows machines.

With this editor, you will get a syntax highlighting feature for more than 80 programming languages. It offers you various features like split view, multiple document interface, and much more. It is available for free.

The RJ in the name of this text editor stands for Rickard Johansson who single-handedly handles this project. This editor is well suited for web development, especially for Windows OS. this editor allows the developers to change every aspect of the UI using customizable themes. It offers additional functionalities like a multiple document interface, color-picker, PHP and HTML validation, repair tool, and many more. You can even preview the browser for HTML files. It is available for free but not open-source. You can even make it extensible using various available plugins. Due to its functionality, this tool can be efficiently used as a PHP text editor.

This editor is an advanced source code editor introduced for macOS and can integrate easily with the underlying Unix shell. It allows you to write customized actions in any programming language that works seamlessly with the UNIX standards stream.

This editor comes with an extensible bundle system that makes it easily customizable. This bundle contains snippets, macros, workflows, templates, and many more. The bundle editor can easily manage this bundle editor. The current version of TextMate has become open source and can be downloaded for free. All these features make this text editor suitable for PHP code writing and editing efficiently.

There is no doubt about how popular the PHP programming language is. But to write and edit PHP codes seamlessly, we need editors offering great functionality to make the coding experience easier.

The choice of the editor may vary from developer to developer as per their comfort. Thus choosing the right editor makes it easy to code, edit, and understand the code from another developer. You will find several editors that provide support for the PHP language. We have mentioned some of the commonly used editors in this article. Before you start coding, you need to understand your project requirement and select the right editor.