What is LAMP Stack? 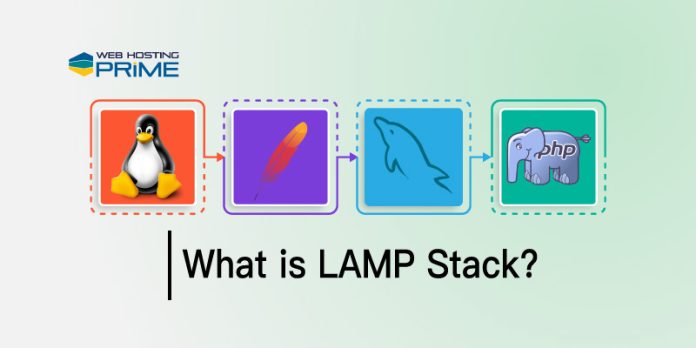 Just like a painter needs paints, canvas, brushes, and a palette to create a masterpiece, software developers need platforms, tools, and languages to build applications. Though in the tech world, one day a particular language becomes the “trend” and the second day another, some tools remain ever-needed. Among such tools stack.

A stack refers to a collection of multiple software that is bundled together to build a platform that supports an application. Layered together one on top of the other, the multiple technologies in a stack work in perfect conjunction with each other to facilitate the smooth working of an application. Working on a simple to understand Last In First Out (LIFO) push-pop mechanism, a stack is used to create a list of function calls and parameters in modern programming.

Probably one of the most widely used implementations of stacks is a LAMP Stack. LAMP Stack is a popular technology stack/platform used by software developers to build and run diverse applications.

If you’re planning to use the LAMP stack for your next application, you need to first understand a few basics related to it. In this post, allow us to introduce you to this technology stack in detail.

What is LAMP Stack?

The word “LAMP” stands for Linux, Apache, MySQL, and PHP. These are the four technologies that are the foundation of the LAMP Stack platform. Developers using the LAMP stack have the freedom to choose Python or Perl languages as alternatives to PHP.

Software developers usually prefer the LAMP stack due to the customization options it offers and its ease of deployment. It’s open-source, and thus free, and is mostly used in back-end development. There’s a large community supporting this stack and it can be used to build a variety of applications.

LAMP Stack is an ideal alternative to costly enterprise software packages. Its architecture is the backbone of several popular content management platforms like WordPress, Drupal, and Joomla. If you’re using any of these Content Management Systems (CMSs), you should know that the LAMP technology stack is working behind the Virtual Private Server or dedicated server used by your website.

Now let’s look at the technology stack and its components in detail.

Operating System (In this case, Linux)

The first layer of the LAMP stack consists of the Linux operating system. The OS is the backbone of the technology stack and all other components that run on it. Before you build an application, you must make sure that the Database Management System (DBMS) and the programming language you plan to use are compatible with the OS of your stack. For example, MySQL and PHP work perfectly on Linux. If you’re planning to use ASP, ASP.NET, or SQL though, you need to look for a tech stack that has Windows as the operating system.

Linux is a popular operating system with an extensive user base spanning all across the world. It is used by different industries to build and deploy applications that solve diverse purposes. Most developers can work with the remaining stack components on different operating systems, but they often choose Linux due to the easy configuration and flexibility it offers.

Web Server (In this case, Apache)

The Web Server is the second layer of the LAMP stack. Apache is one of the most widely used web servers to run applications. It’s used by more than 50% of websites on the Internet. There are several reasons to use Apache, for instance, it has a well-developed community and you enjoy extensive support from fellow programmers in case of any problems faced during development. The Apache web server uses HTTP to process requests and carry information over the World Wide Web. It’s a feature-rich and mature ecosystem.

Though developers have options to use alternatives like NGINX, the choice of web server depends on the application’s requirements.

Database (In this case, MySQL)

The database is the third layer of the LAMP technology stack. At this layer, the open-relational database system MySQL is used. MySQL stores all data in an easily retrievable format and makes it simple for developers to write queries that fetch the required information from the database.

One of the reasons to use MySQL as the database is that it works well with structured domains. The database’s structure is robust and it’s currently being used to run many large and complex websites.

Scripting Language (In this case, PHP)

This is the fourth and final layer of the LAMP Stack. PHP is a programming language that performs the role of combining all elements within a framework and running a web application efficiently.

Developers prefer PHP over its alternatives as it works with Apache servers seamlessly to create dynamic web pages. It’s also much more flexible as compared to HTML (which is often considered very limited). HTML pages can’t execute dynamic processes by themselves. They need PHP which can pull data out of a database and perform the required functions. Developers have the option of inserting PHP code into the section of web pages that need to be dynamic, and this reduces coding work. Just one of the reasons PHP is considered one of the best scripting languages out there.

How Does LAMP Stack Work?

The way the elements of the LAMP Stack are organized is pretty simple. The Linux operating system sits at the bottom and serves as a foundation to build your application. Then come Apache, MySQL, and PHP (in that order).

Due to the simple architecture of the stack, the interaction between these layers is also simple. This is how it works:

LAMP stack is capable of handling static as well as dynamic pages. In the case of dynamic pages, the content changes as per user identity, date, and time.

There can be multiple variants of the LAMP stack based on the types of components used to form the stack. Some of the popular ones are:

The primary uses to which the LAMP Stack can be put include:

And here’s something interesting – did you know that the Wikimedia Foundation uses a customized LAMP stack to improve its website infrastructure and host its services?

Why is LAMP Stack So Popular?

When a particular technology gathers so much attention and praise, it’s only fair to wonder why.

Here are the primary reasons behind LAMP Stack’s popularity among developers:

Today, all businesses have to maintain their presence online since a large number of customers come from the Internet. Because of this, they need scalability options when building web applications. LAMP Stack offers significant scalability options. With a few modifications, the technology stack can grow or shrink to meet the needs of a large or small customer base.

LAMP is platform-independent. The technology stack works with Linux, Mac, Windows, Android, and even iOS. Despite being open-source, its architecture is highly secure and the community releases regular updates to make it more robust. The architecture is encrypted which makes the platform incredibly safe to build and deploy applications.

Like every technology stack, LAMP also has its positives and negatives.

LAMP stack is quite popular amongst developers since all four components of the stack are free and open-source. Also, it’s a technology stack with a proven success track and has been used in some of the top web applications like WordPress and Wikipedia which don’t need an introduction. Developers can share the source code of the applications built with LAMP Stack, and also reuse it for developmental purposes. This eliminates the need for purchasing proprietary software to build and deploy applications. Due to all these reasons, choosing LAMP Stack for your next application development project might be a good bet.