Home What is What is SMTP (Simple Mail Transfer Protocol)? How it Works? 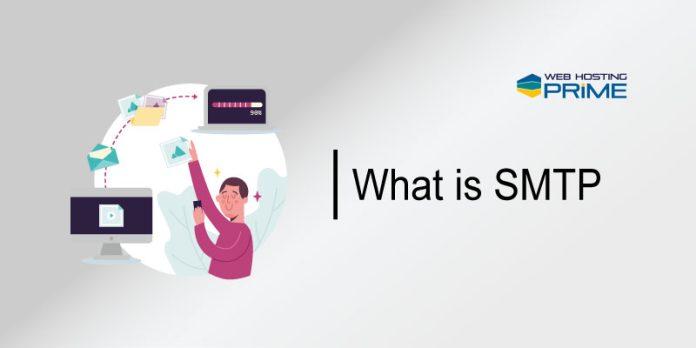 Humanity has always relied on communication. The world is shifting toward digital advancements as a result of digital civilization. It’s all because of the effective and quick communication system. Social media apps have emerged as the most popular, fastest, and safest way to communicate with others. Emails, on the other hand, remain an essential part of any corporate business, organization, or personal mode of communication. It has altered how we communicate.

When we talk about corporate communication, we often assume emails for internal or external communication with clients, creating a brand image, generating potential leads, and so on. An SMTP, or Simple Mail Transfer Protocol, server is required to send emails in bulk. This guide will teach you the fundamentals of SMTP and how it works.

SMTP stands for Simple Mail Transfer Protocol. Similar to IP or Internet Protocol addresses, SMTP is the main communication network. SMTP is also an important part of the TCP/IP protocol. It mainly works on the idea of “store and forward”. SMTP sends the communication to the requested computer while working with the MTA or Mail Transfer Agent.

Whenever you send an email, it diverts from one MTA to another MTA, and the SMTP controls this process. The simple email communication from the server is only possible due to the Simple Mail Transfer Protocol and its numerous codes that incoporate the whole process. SMTP converts and breaks the message into various parts that only the email servers can understand. SMTP has the potential to send only text, but you can’t send fonts, graphics, or other attachments. It is the reason SMTP is named the “Simple Mail Transfer Protocol.”

What is SMTP Server?

The SMTP server is an application used via mail servers to send, get, and relay outgoing mail between email senders and recipients. Whenever a person sends an email, it is shifted over the internet from one server to the next, utilizing SMTP. An SMTP email is only an email sent using the SMTP server.

However, the SMTP server is utilized mainly to send emails; the SMTP relay can be characterized as moving an email starting with one server and then onto the next. It is primarily used to convey emails, starting with one domain and moving onto the next, which is not the same as the user’s domain. The SMTP relay also helps to tackle many issues, such as email deliverability, IP blocklisting, etc.

There are two types of Simple Mail transfer protocol servers;

As stated by the name, a normal server is a common SMTP server that recognizes emails and lines afterward received by the receiver. It is essential to determine the tonne of closed domains that the server deals with. However, if any email rolls in from a substitute domain and a pass-on message are allowed, then it will be forwarded to its destination server. SMTP servers can be utilized as a bidirectional bound service for delivery.

How does SMTP Server Works?

The SMTP server functions exactly like the fundamentals of our basic email system. It gathers the sender’s email and sends it to the beneficiary’s SMTP server, which is usually the local post office.

Therefore, when you attempt to send an email, for instance, through Gmail to the Yahoo email service, SMTP’s primary job is to move the mail from the source’s mail server to the receiver’s mail server. Eventually, the other recipient that receives and further sends the email to the beneficiary’s end is known to be POP/IMAP.

The message in the email is usually sent using port 25 to an SMTP server created by your client’s mail.

If the space in which the recipient has a spot has its record connected with the server, the email is conveyed immediately. The SMTP server passes the message to one other server nearer to the recipient.

Suppose somehow the beneficiary’s server is down or involved. In that case, the SMTP server utilises the backup server: if none of the servers is available, the email is queued, and the movement is retried irregularly, the message will be sent back as undeliverable.

Some basic commands of SMTP

SMTP commands are a bunch of codes that empower the transmission of email from the sender to the receivers or between servers. Below are some basic SMTP commands you ought to know about:

What is the Need for an SMTP server?

Suppose you are familiar with the concept of SMTP and SMTP servers and how they work. The main question that emerges is why we use SMTP servers, despite having different email services such as Gmail, Yahoo Mail, and others. People use these ordinary email services on a daily basis for mailing and for usual communication. Yet, they have specific restrictions that an SMTP server can bypass. SMTP servers can be utilised to both dribble marketing emails and transactional emails.

Scalability is the primary reason for utilizing SMTP servers rather than other available email providers. Even so, only the dedicated SMTP server can make scaling possible. For instance, you maintain a business and need to send emails in bulk related to your new offers and recognize user activity on the site like password changes, forgotten passwords, and signup processes. To deal with each of these, you want a system that should not be possible by sending emails from a browser that isn’t a choice.

What are the Advantages of SMTP Server?

Normally, the in-build SMTP server is provided along with the hosting web service. Hence, you can create free SMTP servers and email accounts for your organization linked with your web hosting service.

In contrast, using a third-party or external SMTP server can benefit you in numerous ways, as outlined below:

An external SMTP server is designed to offer fast speed in the entire process of sending and receiving emails. It will be handled smoothly by the SMTP, especially if you run a business and need to send and receive emails in bulk.

Your email will be secure and delivered without interruptions or delays with the help of an external or specific SMTP server. You could also use a free SMTP server, such as Amazon SES, which is very easy to set up and use. These servers also prepare a monthly report with details on low and high and other critical data that may be important to you.

The SMTP server guide mentioned above would have helped you provide a comprehensive understanding of how SMTP works and its effectiveness in meeting the communication needs of organizations for various purposes. Before settling on a specific SMTP server, it is a good idea to spend some time gathering information about the various types of SMTP servers available on the market. Before deciding on an effective communication method, consider your needs.