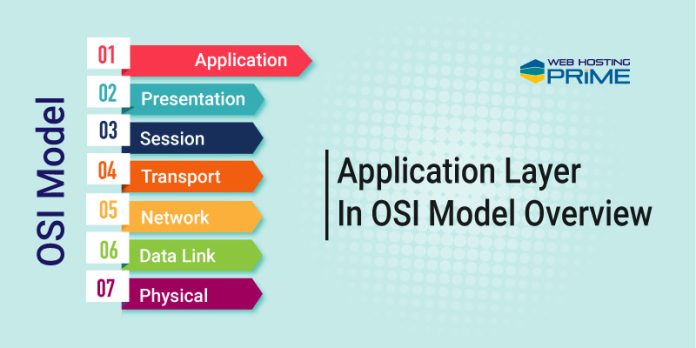 The application layer sits on top of the OSI model, and it occupies the same position in the TCP/IP model as well. The main reason why it is present in both models is because of its significance in the interaction between the user and the application. This layer is responsible for providing the protocols and other functions that applications need when they are communicating over the network.

Keep in mind that, as a user, you might or may not interact with the applications, but still, they are working in the background to get your work done. It is the only layer in the OSI model where you can actually see the communication happening between the two users. It is present at the top of the OSI model. As a result, it does not do anything for any other layer. It takes the help of the transport layer and all the layers present below it to communicate and transfer data to the remote host.

Services provided by the Application layer

The application layer provides a number of services to the network, and each of them has been defined below for your understanding.

Network Virtual Terminal: With the use of an application layer, a user can quickly log into the remote host. For this process to run smoothly, the application has to come up with an emulation of the terminal at the remote host. The system at the user’s end will communicate with the software terminal that will talk to the host. The remote host will think that it is communicating with its own terminal. As a result, the user on the other side is given login access.

File transfer: access and management: the application layer makes it possible for the users to access files on remote computers. It is also used for the retrieval of files and their management as well. At the same time, they are sitting in a remote location. FTAM is used to define the hierarchy of the virtual file system. That includes its file structure, file attributes, and the other forms of operations that can be performed on files. In addition to their characteristics,

Directory services: this network gets a distributed database that can allow access to global information about a number of objects and services.

Importance of Application Layer In the OSI Model

Given below is the list of features that the application layer provides to the network.

Protocols used by the Application layer

The following is a list of the different protocols used by the application layer.

Telnet stands for Terminal Network. It is a type of protocol that allows one computer to connect with another local computer. In addition to this, it is also used as a standard TCP/IP protocol for virtual terminal services, which is the ISO. Standardized in the Telnet protocol, the computer that starts the connection is defined as the local computer. During the telnet protocol connection, whatever function is being performed on the remote computer will also be displayed on the local computer. Telnet works on the client/server principle. As a result, the local computer uses the telnet client program, and the remote computer works via the telnet server program. Telnet has three different modes; the first one being the default mode, the second being character mode, and the last one being line mode.

The default mode is used when no other modes are invoked. With the help of this mode, Telnet is able to provide echoing functions. When a user’s network is performing the telnet protocol, it will take the input type as a character, and then the client will echo the character on the screen. But, the client does not send the echo until the whole line is completed. Apart from that, character mode is used when each character typed by the client needs to be sent to the server. Lastly, line mode helps with echoing, character erasing, and applying other functions to the character. All of this is done from the client-side. In inline mode, the client will send the whole line to the server.

The DNS protocol performs the conversion of a hostname into a computer-friendly IP address. The other computational devices can read that out. An IP address is given to each device that is connected to the internet. The IP address provided by the DNS works like the street address for your home. The DNS query is passed between a number of devices. On the other hand, the DNS lookup works behind the scenes, and it requires no interaction from the user’s computer when making the initial request.

Four DNS servers are used when loading a website or even a webpage. First, there is a DNS cursor. It is developed to receive queries from the client’s machine through applications such as web browsers. After that comes the nameserver, which is used to transfer human-readable hostnames into IP addresses. It serves as a reference to the IP addresses that the client is looking for.

The Top-Level Domain Server (TLD) is the one used for reaching out to the specific IP address, and it also comes with information about the last portion of the hostname. such as.com,.in,.uk, and.org, among others.

Dynamic Host Configuration Protocol (DHCP) is the full name for Dynamic Host Configuration Protocol, and it works to provide the subnet mask, router address, DNS address, and vendor class identifier. It is built on the client-server paradigm. It accomplishes its tasks through the use of discovery, offer, request, and ACK. The DHCP port number is 67, and the client port number is 68. Furthermore, it operates by allocating IP addresses to devices from a pool of addresses. During DHCP implementation, the client and server primarily exchange four DHCP messages. As a result, the connection between the two is complete. The DORA process is another name for this connection. However, there are eight different types of messages in the works.

FTP stands for File Transfer Protocol, and it is used for transmitting files from one system to another with the use of a network. When we talk about the TCP/IP model, FTP is present in the application layer. When the FTP connection is established, the receiving end of the system is known as the localhost. The second computer that is involved in the transmission is known as the “remote host.” In most cases, the remote host is your server.

For the transmission of files to take place, both computers need to be connected to a network and should be appropriately configured. Both the server and the client should be set up in such a way that they come with the FTP software installed. So accessing the services becomes more manageable. Lastly, FTP relies on two communication channels. The first one is the command channel. That controls the conversation. Second, is the data channel that is used for the transmission of file content.

The acronym SMTP stands for Simple Mail Transfer Protocol, and it is accompanied by a set of communication guidelines. With this software, electronic mail can be sent over the internet. SMTP is primarily used to create rules to facilitate communication between the server and the client. Servers can identify themselves and then specify how and what type of communication they are attempting. In addition, you can use it to check email addresses for errors and to edit or remove them as needed.

So that’s what the application layer is all about; we hope this article has helped you understand how it works and why it’s so important. Furthermore, this is the OSI model’s topmost layer and, without a doubt, one of the most important. If you believe we have missed something, or if you want to discuss anything about the application layer, please leave a comment below and let us know. On our website, you can even investigate all of the different layers present in the OSI model. Have fun learning!!