Home How To How to Install NumPy 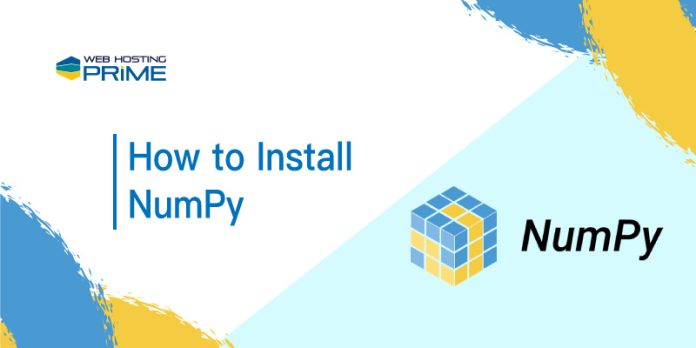 Programming is definitely an important skill to be possessed at this time and age. All the technology in this world, ranging from our phones to the most advanced healthcare facilities somehow depends on programming. In a very literal sense, programming is what makes software application building possible.

The fundamentals of programming lie in the syntax (symbols and notations) that is used to create statements that allow computers and other devices to carry out instructions. This is what causes applications to behave in a particular way that developers define. Anyone who wants to be a professional developer needs to learn and master at least one programming language.

There are multiple programming languages that one can learn at the present time. Java, C, C++, Perl, etc. are some common programming languages that you might have come across. Each one serves a different purpose and has a different syntax. For example, C is extensively used in writing the foundation of operating systems like Linux while C++ is ideal for application and game development, and Java is used for developing mobile frameworks.

But there’s another popular language that often comes up whenever someone talks about programming, and it’s none other than Python. What sets Python apart is that it can do almost all the things that many other programming languages can do while being extremely easy to work with. Quite literally serving as the ‘Jack Of All Trades,’ Python’s popularity is due to its powerful features and the relentless community that supports it.

You can quickly get help with any coding issues that you may come across when working with Python from online forums dedicated to Python itself. It’s truly one of the easiest languages to learn and provides a simple syntax for its keywords and functions. Python’s official documentation is also by far the simplest to follow, and with several free courses available online, any person with any sort of computer can learn it.

Much of Python’s success is attributed to the vast range of libraries it supports. These libraries help augment the core functionality of the language and allow developers to achieve much more with it. In this post, we’ll be talking about the popular Python library, NumPy in detail. But before that, let’s take a brief look at everything that Python libraries can achieve.

A Quick Look at Python Libraries

Libraries in Python are large files of multiple predefined functions that make it easier to build apps. You can use these libraries to build apps without writing each function from scratch. Yes, many other popular programming languages come with user-defined libraries and header files, but the thing that differentiates Python from them is the capability of its libraries to integrate seamlessly with a number of domains including machine learning, web development, application development, and data science.

In fact, some Python libraries have such a vast contributing base that they are now the staples of the domains they are used in, such as Requests, PyTorch, OpenCV, TensorFlow, and NumPy, to name a few. Each one of these libraries has extensive features that make building applications and models much easier and hassle-free.

Here’s a quick round-up of what some of the most widely-used Python libraries offer:

These libraries are just the tip of the iceberg. Python supports a ton of other libraries which can help developers solve many other complex issues very easily. If you’re getting into Python programming, you should definitely find out what all libraries the language supports so that you can make the most out of your programming.

And now let’s proceed with our discussion about NumPy.

What is NumPy & Why is it an Awesome Python Library?

Numerical Python or NumPy targets to make Python a favorable language for running mathematical algorithms. It is an open-source library, which means that any issues that you have can be sorted out by contacting forums or community pages dedicated to it. It also means that you can contribute to its functions and get a first-hand experience of how the open-source community works.

You should know that Python doesn’t execute algorithms like other languages such as C++ since it’s an interpreted language that processes code line-by-line. This is in contrast to C++ which first compiles the code entirely and then executes it in one go, which is much faster than Python. Although the ‘Pythonic’ way suggests that the right code can improve execution speeds in just a few lines, in reality, there’s only very little improvement. This is where NumPy can be used to enhance application execution speed, especially when using large multidimensional arrays and mathematical functions.

NumPy has efficient functions that can help you execute high-level mathematical algorithms and logic. For example, developers use NumPy when working with linear algebra, matrices, and so on, as the efficient array function can help them achieve their purpose with a simple function call. NumPy’s array function is said to be about 50 times faster than Python’s default list. As arrays play an important part in data science, where speed and resources are critical, NumPy is a staple for data science. NumPy is also used in other niche libraries like OpenCV that deal with image processing where indexing and three-dimensional arrays are crucial.

So, are you all charged up to create mathematical algorithms that are highly efficient? Well then, read along and learn how to install NumPy to your Python environment.

How to Install NumPy?

Before installing NumPy, you must have Python installed on your system and the ‘Path’ variable properly set up. If you face any issues with NumPy installation, revert back to reinstalling Python. If you haven’t installed Python yet, we suggest you use the Anaconda Distribution as it contains Python, NumPy, and other commonly used packages for scientific computing and data science.

Assuming you have Python installed properly, you can go ahead with these steps to install NumPy.

‘pip’ is the default package manager for Python. You can use pip to install any library with its name or URL. Although it’s not necessary, we suggest you create a virtual environment before installing NumPy using pip because this will enable you to easily revert back to another virtual environment in case of improper installation or code malfunctioning.

To create a new virtual environment

1. Open Command Prompt or Terminal according to the OS you’re using and type the given command and press the ‘Enter’ key:

Linux and macOS users might have to replace “python” with “python3” just in case the above command doesn’t work.

2. Now that the virtual environment is created, you need to activate it. Windows users should run the following command:

3. Once the virtual environment is activated, the terminal line will start with (.venv) and a $ symbol for Linux and macOS users. Now you can proceed to install any library or run Python in this environment.

4. Open the Command Prompt on Windows or the Terminal on Linux or macOS and run the following command:

If you encounter an error saying ‘pip is not a valid command’ then reinstall Python.

5. NumPy proceeds to install and displays a message saying, “Successfully installed”. If you’re having issues installing on Linux, try adding ‘sudo’ before the command and enter the user password to allow the installation.

If you already have NumPy installed, it will show the message, “Requirement already satisfied”. You can then proceed to update your libraries by typing the given command and pressing the ‘Enter’ key

In this article, we discussed Python libraries and why they are a crucial part of Python. Also, we discussed why NumPy is a great library for users needing mathematical functionalities. Installing NumPy is quite simple with the techniques shown in this post. Once you install it properly, using the library is very easy and you can learn it really quickly.

How to Check Java Version on Mac or Windows