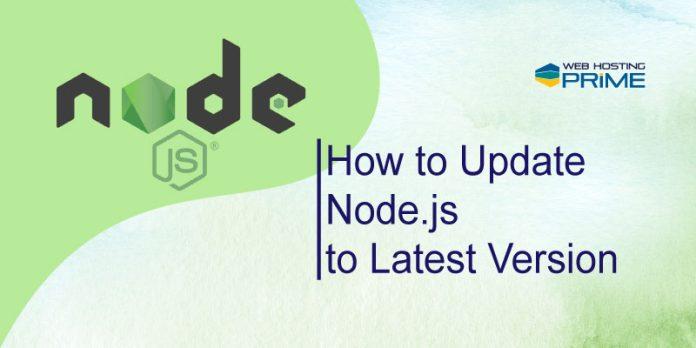 It is important to keep the operating system, applications, and software installed on your PC updated because by doing so you get new and enhanced features along with critical patches to security holes. If you are using Node.js in your projects to run JavaScript on the server, you have to keep it updated too. Here in this article, we are going to discuss some of the best ways to install the latest version of Node.js in Windows, macOS, and Linux operating systems.

Node.js is one of the most widely used JavaScript runtime environments. As Node.js is open source, you are going to see minor updates coming up every few weeks and major changes once or twice a year. So if you want to keep your projects secure, and avail the benefits of newly added features, you need to upgrade the Node.js.

Why Do You Need Node.js?

Given below are some of the advantages of using Node.js for the runtime environment of JavaScript.

If you want a super quick response from your web application then you need to use Node.js for your app development. Node.js is loved by developers due to its multitasking ability. Unlike other platforms, it works with the single-threaded, event-driven architecture, which processes multiple concurrent requests without even slowing down the device or taking the whole bandwidth of the system’s RAM.

Caching has always come up to be the most desired benefit of Node.js usage. This runtime environment is best when it comes to caching data. It works by caching up requests that are made to the app in the app’s memory. Moreover, the nodes are not bogged down by the app’s historical data. Thus, both the execution and the re-execution of commands take place efficiently.

Why Upgrade Node.js to the Latest Version?

Before you upgrade to the latest version of Node.js, you must know why you need to upgrade in the first place. Right now, the JavaScript community is growing at an exceptional rate, and with the same rate, the NPM repository is also expanding. All the new JS frameworks and libraries require users to have the latest Node.js versions because they are developed using the latest technology. To use them, you have to keep up with the updates and stop using the outdated version of the libraries, especially in the case of Node.js.

Let us give you a simple example, suppose you are developing an application, and you are working with the latest version of React, which right now is 17.02 (stable release). So if you are using the 9.0 version of Node.js, you will face some technical issues while installing the React.js project because you are currently working on the outdated libraries of Node.js version 9. On the other hand, there are some new libraries present in the React 17.02 version, which requires users to have the latest Node.js version.

This is just an example. Several things could go wrong when you are working with the previous version of Node.js along with some other program, module, or library. Node.js is being improved with its latest iteration, and some of the main benefits are mentioned below to showcase how the latest version is different from the previous one.

The one question that strikes one’s mind before updating any application is what additional features are there in the latest version, and how they are going to add value to the project. The same happens when an update of Node.js is announced. Given below are the three main changes that took place with the latest upgrade in the Node.js version.

The latest version of Node.js uses the inclusion of NPM7 as its release headliner. With this, you get to implement the features of the NPM workspace with Node.js. This will help developers in managing multiple NPM packages in a single file system. Moreover, the developers who were working on the Yarn package manager or Lerna will see the similarities in the NPM7 workspace’s implementation.

Moreover, the dependencies were ignored in the previous version of the NPM, which was NPM6, but in NPM7, all the necessary dependencies are present by default. Now you can run the NPM packages without having to install them beforehand by using the simple npm.exe command. In addition to this, now NPM also supports Yarn.lock files. A developer can use this file to determine the path for fetching out the packages. Now, NPM will provide developers with notification about whether a package has been removed from or added to the system. These are just a few of the benefits which NPM7 has brought with its implementation in the latest version of Node.js.

The latest update of Node.js allows a bump of the V8 engine from 8.4 to 8.6. Now you might be thinking about what V8 is in JavaScript? Well, it is nothing but an underlying JavaScript engine on which the commands and the other functionalities of Node.js work on top.

V8 is an engine that defines the JavaScript language features that can be used by developers in their projects. This version of the bump might seem a small one for a lot of users. But the latest version will require a reduced amount of code to be written. Thus, now your code will be more readable and have fewer lines of code in it. Some of the examples where a developer can benefit from the latest version of Node.js is in the logical assignment operators that are used to define the values to the variable conditionally.

3. No Warning for Experimental Modules

A lot of times, when you are trying to run an ECMAScript Module (ESM) in Node.js, you will come across an error of “Experimental Warning”. The latest version of Node.js has finally removed this annoying warning without affecting the experimentation functionality of Node.js. ESM is one of the standard module systems, and it provides users with the ability to manage their variables, organizing the functions present in the code.

Also, it is used for grouping up the functions together, which makes it easier for a user to comprehend the code. ESM is said to be a great module that comes with a simple syntax, async nature, and has a tree-shockability feature that helps in the removal of dead code without affecting the rest of the working code.

Using Node Version Manager (NVM) has made life easier for a lot of developers. For Windows OS, the method for upgrading the Node.js version with the use of NVM is quite easy. All you have to do is follow the steps given below to get the version that you want.

Linux being open-source, provides numerous ways to upgrade Node.js. In this particular article, we are going to show you the easiest way to upgrade the Node.js using Node installer on Linux.

Updating Node.js on macOS becomes easy with the use of Homebrew. Therefore, to simplify the process of updating Node.js on your macOS-powered system, download and install the latest version of Homebrew on your Mac system from (here). Once you have installed Homebrew, check its version by using the following command on your terminal: brew -v. Also, you can update the already installed Homebrew version using brew update/ brew upgrade.

You can also upgrade the Node.js installed on your macOS system by using Node Version Manager (NVM). To find the latest version of Node.js using it, enter the command: nvm -v.

To download and run the latest version of Node.js using Homebrew, write down this command in your terminal:

In case you are looking to download a specific version of Node.js, you need to have NVM installed, and after that, you can use the following command:

So these were the different ways of downloading and upgrading the latest version of Node.js. Each one of these methods can be used to upgrade the Node.js version depending on the operating system you have installed in your machine. Furthermore, Node.js is an open-source platform. Thus, it comes with a strong community of active users who are constantly working on upgrading the program and the tools which are required for it to work. You get to choose if you want to work with the latest version or go with the Long-Term Support version (LTS) to create a new application using Node.js.

Facebook
Twitter
Pinterest
WhatsApp
Previous article
SSL vs. TLS: Which One Should You Choose?
Next article
How to Host and Configure a Minecraft Server with No-IP?