Home Difference SSL vs. TLS: Which One Should You Choose? 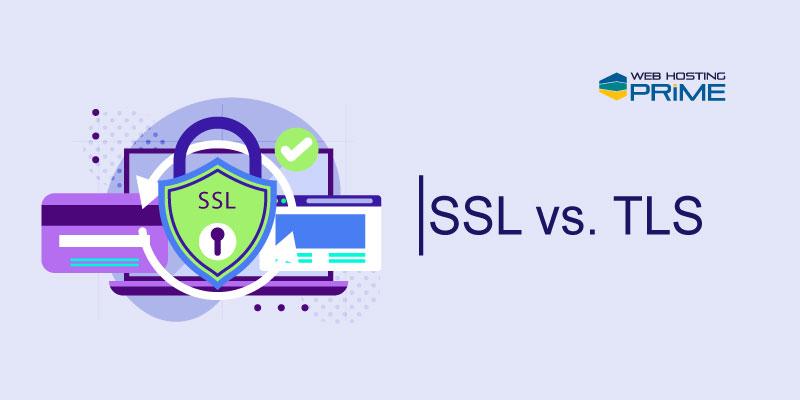 The full name of SSL is Secure Sockets Layers, and the full form of TLS is Transport Layer Security. The primary function of both these protocols is to provide security between the web browser and web server. Now, function-wise they both look similar to each other, and if there are any differences between them, then a beginner wouldn’t notice. Unless you use both of these terms daily, you wouldn’t notice how they differ from each other. That’s why we have published this report to satisfy your curiosity and explore the differences between SSL and TLS. If you want to use the security systems on your website, then you should know how they function.

A Brief Description of SSL

SSL was developed in 1994 as a system to create a secured communication layer between the client and the server on the Internet. After some years, IETF or the Internet Engineering Task Force selected the SSL protocol and regulated it as a protocol. There are two versions of SSL, and in the later version of SSL, the vulnerabilities of the previous version were corrected. SSL 1.0 was created to overcome security flaws; version 2 was created in 1995 by Netscape to better the previous version of SSL. But the version 2 had some design flaws, and that compelled Netscape to release SSL version 3. But in 2011, SSL version 2 was declared to be obsolescent. Now SSL version 3 is the upgraded version of SSL 1 and SSL 2 that was designed to bypass all the security design flaws of previous versions.

SSL version 3 provides every integrated website with a secure tunnel between the machines and the servers that are being connected for data transfer over the Internet. A common example of SSL is HTTPS which turns HTTP into a secure communication connection. When a website is secured with HTTPS, it means that the online website is free from security flaws such as phishing or hacking. The best way to tell if the website has a secure HTTPS connection is to check the little padlock displayed on the left side of the address bar where the URL of the website is usually shown.

A Brief Description of TLS

TLS or transport layer security is another security protocol for creating privacy and data integrity on your app. TLS is also used to create secure web applications. When you are talking about TLS, please note that it was created to encrypt Internet communications between web applications and servers. You will find the TLS encryption in email clients, texting apps, and Voice over Internet Protocol applications. In 1999, TLS was suggested by the Internet Engineering Task Force. Now, it’s time to talk about the history of TLS protocol. While we are at it, we should tell you that TLS version 1 was the upgraded version or SSL 3, but TLS 1 also allows version downgrade to SSL 3. After version TLS 1, TLS 1.1 was created in 2006 which is, of course, an updated version of TLS 1. TLS 1.1 protects against Cypher Block Chaining attacks, and now it is available on Google Chrome, Apple Safari, Mozilla Firefox, and Microsoft browsers. After TLS 1.1, TLS 1.2 was also launched in 2008 that comes with the specifications of hash and algorithms, especially used for the client and the server. TLS 1.2 makes the encryption authenticated and creates extra support for data modes. With TLS 1.2, web applications can verify a large amount of data by using the cipher suite. And there is one last version of TLS, which is TLS version 1.3 that was created in 2018. TLS v 1.3 has some features that differentiate it from TLS 1.2. Such as, TLS 1.3 supports SHA 224 and digital signatures.

Now that we know about both SSL and TLS, it is time for us to find out the key differences between the two protocols.

Dissimilarities Between SSL and TLS

The contrasts between SSL and TLS are so minute that only a person with experience can identify them. But since you are a beginner, we aim to provide you with the most notable differences.

In SSL, you will get support for the Fortezza cipher suite, but TLS does not provide the support for it. Instead, it creates a standardized process to define the new cipher suites, including IDEA, Triple DES, RC4, AES, etc.

The SSL message authentication system creates a bridge between the key details and the application data using the ad-hoc way at the same time while TLS depends on HMAC.

Overall, the small differences tell you how hard it is to differentiate between SSL and TLS. But to make the process easier, you should remember that SSL is an older version of TLS and TLS is a more modernized and standardized protocol that is accurate and advanced.

How Do SSL and TLS Secure Connections Differently?

While talking about the differences between SSL and TLS, it is important to know about the different ways they both build the connection. For beginners, an SSL handshake creates a connection through a port, and TLS on the other hand creates a connection through protocols. This handshake works with different methods and algorithms that are known as cipher suites. And cipher suites create the main differences between SSL and TLS when it comes to creating secure connections. In the cipher suite, there is a key exchange algorithm, authentication or validation algorithm, an algorithm for bulk encryption, as well as message authentication code or MAC algorithm. Every TLS and SSL version that we talked about in this post, have their supported cipher suites. When newer versions will be added to the protocol, more cipher suites will be created to keep up with the performance and security of the connection. Let’s now talk about how SSL and TLS work when it comes to establishing a secure connection.

TLS works with the combination of symmetric and asymmetric cryptographies that offer enhanced performance and security features while doing an encrypted data transmission. Symmetric cryptography allows the data to be encrypted as well as decrypted through a secret key that only the sender and the recipient can access. The secret key is 256 bits or 128 bits in length, but it will not be less than 80 bits because that will make it insecure. Symmetric cryptographies are helpful when it comes to computation, but since it has a secret key, they should only be shared with trustworthy people. In asymmetric cryptography, there are two keys: private and public. The public key is connected to the private key mathematically, but its length does not allow it to separate it from the private key. This means the recipient of the public key and the sender can also use it to secure the information they want to transmit. But the data that they are sending can solely be interpreted with the private key from the recipient. This allows an even better and more secure connection between the device and the server.

If SSL and TLS are both used to secure the data connection between the server and the devices, then can they replace each other?

Should You Employ TLS Rather Than SSL?

Yes, TLS can replace SSL, and you can operate TLS rather than SSL. The public keys of SSL are deprived of use due to safety exposures. For example, in 2019, SSL was not a completely secure protocol, but since TLS is a modernized and advanced version of SSL, it is approved and tested by many web apps. But the newer versions of TLS are also way better than the previous versions in terms of performance and security enhancement. But that is not the only reason TLS is better than SSL when it comes to security and performance. Web browsers do not support SSL versions anymore. For instance, Google Chrome does not support SSL 3 even since 2014. And some of the popular web browsers have been thinking about discontinuing the use of previous versions of TLS since 2020.

So, if you want to replace SSL, you can only use the recent versions of TLS and not the older versions because they do not provide you with enough stability. But how do you make sure that you are using the most updated TLS protocols and not the older ones? You have to remember that TLS certificate and TLS protocol are not the same things that web servers use. For example, you don’t have to change the certificate to use the TLS protocol, although it shows that it is an SSL certificate. An SSL certificate is compatible with both SSL and TLS protocols. But it is on you to decide which protocol your website should use during the server level. For instance, some hosting providers allow you to use TLS for secured and modern performance. And some other hosting providers want you to use SSL protocol for your site. But you can also reach out to your hosting provider and ask them to disable the SSL certificate and enable TLS for your website.

Consequently, TLS and SSL are protocols that encrypt your data connection over the Internet. The only difference between TLS and SSL is that TLS is the modern and most advanced version of SSL. But when it comes to securing your website’s data transfer, then SSL is more dominant than TLS. But some people mean TLS when they are pronouncing SSL. It is because SSL versions are deprecated for a long time, and since then, people are using TLS everywhere even when they don’t know it. But if you want to use TLS or SSL protocols, then you will have to use the SSL certificate on your website. Even if you are using the TLS protocol, the certificate will come off as an SSL certificate, and you might be confident that the SSL certificate supports TLS protocols. Also, know that when you are using TLS protocols, make sure that you are applying the latest version of the protocols because SSL and the previous versions of TLS protocol are deprecated, and they are no longer considered secure. However, the SSL certificate that you are using will not determine which protocol your server will use. When you choose the SSL certificate, you will have to determine on your own which protocol you want to choose during the server level. And once again, your hosting provider will allow you to choose the correct protocol for your website, but you can also request them your preferred protocol if TLS is not offered by the hosting provider. For more information regarding SSL vs. TLS, you can check out our other relevant articles.