Home Programming What is PHP? 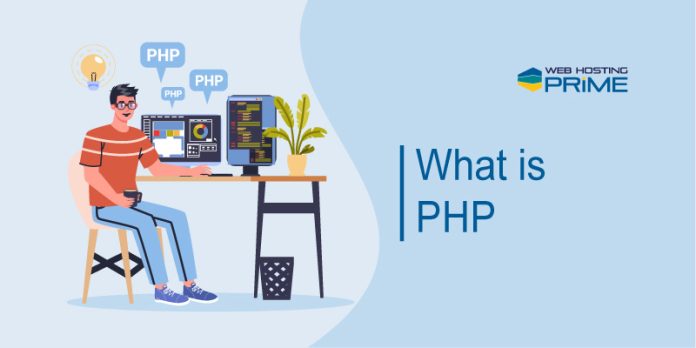 PHP stands for PHP: Hypertext Preprocessor. It is a server-side scripting language that is embedded in HTML. The primary use of PHP is to maintain dynamic content, databases, and session tracking. Even a beginner user can build an entire e-commerce website using PHP.

One of the significant benefits of using Php as your scripting language comes from its open-source, interpreted, and object-oriented nature.

Php is exceptionally suited for web development. As a result, many web application developers use Php for performing executables on the server-side and generating the dynamic web pages that we see on the internet today. The server-side market data clearly shows the supremacy of Php over Java, ASP.NET, Ruby, Scala, etc. (source). Today, we will find out how Php helps you load the websites on your browser and how, as a website owner, you should think about using Php as your server-side scripting language.

What is a Scripting Language? [Definition]

Scripting languages use a specific program which is an interpreter, which is used to translate commands. It can directly interpret from the source code, and thus, it doesn’t require any compilation step. But other programming languages like C, Java, and others will need a compiler to translate the commands into a machine code before they can be converted into executable commands that the machine can interpret.

To be able to find out the difference between interpreted and compiled programming language might become problematic in the coming years due to new hardware and coding practice making the distinction almost negligible. But until then, as a young programmer, you need to know that an interpreted programming language is developed in such a way that it helps in executing the source code directly, and there is no need for a code to go through the compiler so it can be converted into machine-language instructions.

On the other hand, if we look at a compiled programming language, a compiler can translate the code written in high-level programming into a lower language so the machine can execute it. There are two well-known compilers in the world of programming; the first one is Eclipse which is associated with Java compilation. The second is GCC which is used for both C and C++ programming languages.

Rasmus Lerdorf did the first usage of Php in his unreleased version. He kept track of the people looking at his online resume. After that, he released the first official version of Php in early 1995, and back then, Php was known to be a Personal Home Page Tool. The scripting language in its early days came with a very simplistic parser engine that could only understand a few special macros and other homepage utilities, which were pretty standard on home pages in the early days of the internet. That parser was then again re-written in mid-1995 and got the name PHP/FI version 2. The addition of FI came from the other package, which Rasmus also wrote, and it was present in the form of interpreted HTML data.

After some time, Rasmus combined the home page utilities and scripts with From interpreter and also added MsQL support. All this combination resulted in the formation of PHP/FI. Since its release, the PHP/FI got the pace, and lots of enthusiast programmers started contributing to its primary code. PHP/FI started to show up on a lot of websites that were present on the internet. In 1997, a specific change in the development of Php as the scripting language was changed from being just Rasmus’ own project to the number of contributors who helped expand the code of Php and allowed it to be used in a number of applications. After that, the parser for Php was re-written from scratch by Zeev Suraski and Andi Gutmans. This new parser became the Php version 3 that we now know. There are tons of code and other utilities which were transferred from PHP/FI to PHIP3. Apart from this, a lot of the code was also re-written.

How Does PHP Work?

Php, as we have said earlier, works on the webserver side of things. A web server is a program of web pages to the internet user who requested it from their browser. When you enter the URL of a website, you are requesting the webserver to send you the HTML file for the same. The web server will read your request and send the HTML file, which your browser then shows. One of the significant differences between a Java-based web server and Php based web server is that in a Php web server, there is no built-in web server. Php scripting is essential to understand the working of some of the popular websites.

Php is said to be an interpreted language. As a result, you need to type in the line of code when a page is requested, and the Php interpreter will load up with Php code, parse, and then execute it. This is something different from Java and C#. In these languages, source code needs to be compiled first and then executed—upcoming requests on the server. When you are using Php as a server-side scripting language, you don’t really have to re-compile your source code in order to make trivial changes. All the changes will have an immediate effect on all the upcoming requests.

A request life cycle starts when you type in the URL in the browser’s address bar, the web browser will issue the GET request from the server. A web server could be using the Apache framework, and once it gets the request, the server will start looking for index.php.

Once the Apache decides which file is a Php-based file, it will send it to the interpreter. Once the interpreter receives the file, it will read the code and execute it. After that, the interpreter will provide the output, which is sent to the Apache, and then Apache will send it to the Php, which will output the renders on the screen. If we look at the numbers, Php is being used under the hood of more than 200 million websites that are present on the internet. The relation of Php and Apache starts from the learning process. Once you start your journey as a Php developer, you need to learn Apache as well.

Given below, we have discussed some of the significant advantages which a user gets to enjoy when they are using PHP as their server-side and client-side scripting language.

Php is without a doubt one of the easiest scripting languages of all time; if we compare it with others, we can clearly see that it doesn’t require any manual or intensive studying of syntax and logic. The syntax is quite logical, and students will have no issue in using the command functions as they help them in providing insight about which function they need to perform in order to get the required result. That’s why a number of developers prefer PHP over other scripting languages and can easily optimize the applications which they have created.

As a developer, one of the things you look for when deciding the core programming language for your project is the flexibility of language. In development, flexibility stands for the ability to make changes on the go and even after the development is finished. This type of flexibility can be easily found in PHP. Moreover, when using a scripting language, flexibility is quite crucial as you don’t know when you might need to change the functionality of the project on which you are working. As we said, Php actually allows developers to make changes even when the project has already started. As a result, you don’t need to write a new code or any command functions as you can easily update the changes in the existing code and functions.

PHP is compatible with major operating systems, and it even comes with legacy support. Likewise, a developer can quickly scale up this scripting language when they are writing the code. This makes it quite an ideal scripting language for working on various technologies. There is no re-development. Thus, it saves a lot of time and money.

The performance output of PHP depends on how you write the code; PHP does have the potential to be turned into an efficient language. As we already mentioned, it can be scaled up when required, and with its usage, you can even create a large number of applications. So in terms of efficient performance, PHP beats all the other scripting languages by a large margin.

When you are developing a new project, you want the minimum amount of resources to be spent on the project. In that case, PHP might be of great help. PHP is an open-source web language. Thus, you don’t need to pay any fee when using it in your project. Furthermore, it can easily combine and work with various different databases, which helps in reducing the cost of adding in extra technology in the ongoing project.

The last benefit of using PHP over other scripting languages is that you get more power over the codes and the functions which you create. If you look at the other scripting languages, their syntax is quite bogged down and complicated. But with PHP, a few simple lines of code are enough to perform the same task. In addition to this, PHP does allow users to add in tags; this gives developers the freedom to add and mix the number of HTML tags. Thus, making the content of the code dynamic in nature.

As we have talked about the advantages, we surely need to write down the other side of the coin, that is the disadvantages that a developer has to face when using PHP.

So this is what PHP is all about; it is still being used by a number of websites such as Facebook, Yahoo, Wikipedia, etc. PHP’s popularity is all thanks to its simple to learn code and its ease of deployment on the server. Thus, no matter how many new server-side scripting languages will come in the future, PHP will always be the first choice for beginners and professionals alike.