Home Security What Is Split Tunneling: How Does It Work? 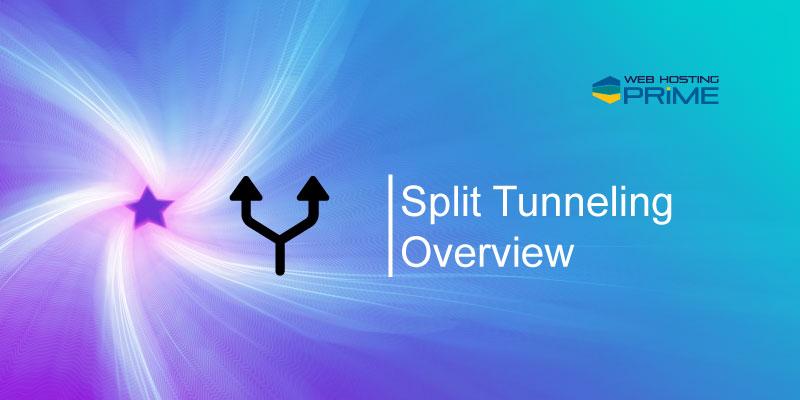 Split tunneling might seem like complex jargon in the field of networking, but in truth, split tunneling is nothing more than routing some of your data through an encrypted VPN connection. while still allowing other apps and data to be sent over to the internet directly without using the VPN. This type of routing mechanism is most relevant for remote access-type VPNs, something which has become quite common when you are using work from home. In a work-from-home environment, your computer needs to be connected directly to the remote network your office or company uses.

Today, with the help of this article, we will be showing you the benefits of using split tunneling. Along with this, we are also going to talk about how it is different from a full tunnel and some of the issues you might come across when you are using split tunneling to transfer the data.

Split tunneling is a clever VPN feature that allows you to have more control over data encrypted and sent through a VPN server. This also helps you find the best solution when it comes to sending the data at a much faster speed. So how does split tunneling work? Well, the thing is, in order to understand how to split tunneling works, you first need to get the basics of VPN clear.

So, by default, all computers use a single, direct connection to connect to the internet. Your data will be sent and received immediately from this immediate connection. But when you install a VPN on your system, it will create a secure connection between your device and the VPN server. From then on, when you try to connect with the internet, the VPN will connect on your behalf. As a result, every single bit that is sent and received on your computer will go through the secure VPN server.

This keeps all your data encrypted, and there is less chance that your IP address will be traced back in any way possible. But because of this, every single bit of data is transferred via VPN, which slows down the speed of your internet connection. As a result, a VPN user needs to go through split tunneling that uses two connections at the same time. Your computer will now be using a secure connection via VPN, and then there will be an open connection to the internet. This results in you protecting your confidential data via VPN and maintaining high data transfer speeds for other tasks and surfing the internet.

There are multiple ways in which you can use split tunneling from your VPN service provider. Every VPN provider has slightly changed their method of using split tunneling, but the idea behind the implementation is more or less the same. What you are doing when using split tunneling is deciding which of the websites and apps you are going to access via VPN. And which ones will be directly accessed by your regular internet connection with no enhanced features of VPN security? There are two methods of split tunneling, and both of them are written down below.

If you are someone who is already using a VPN service, then inverse split tunneling is the method you should use. With the VPN service, your default setting is changed to run everything through the VPN. Inverse Split tunneling is more like a whitelisting where you get to specify the apps and the URLs you want directly to connect with the internet for better data transfer speeds.

For example, if you are a YouTube content creator and you need to upload videos to your channel, In that case, using inverse split tunneling will help you upload videos without any speed loss due to the VPN service you are using.

On the other hand, if you are a crypto investor and want to make sure that your crypto logins and accounts are secured for a specific app, then you can select the particular app on which the VPN will work. Apart from this application, all the other apps and URLs will use your regular internet connection to receive and send files across the internet.

Just like app-based split tunneling, even here, you are going to provide the URLs of the websites that you want to have VPN encryption and safety for. As a result, if you are shopping online or using travel or banking-based websites to access your account details, using a VPN will be a great option to keep your transactions safe from hackers who are trying to eavesdrop on them.

A funnel tunnel VPN service is where every single bit of data sent or received on your computer from the internet comes from the VPN service that you have chosen. Most of the time, you should stick with a full tunnel as it is more secure and keeps you away from being tracked online.

When you are using split tunneling, you are not a hundred percent secure or encrypted all the time. What this means is that the VPN services will only work on specified apps and URLs that you have listed with the VPN service provider. Split tunneling, also called forced tunneling, enables your visibility to websites you are accessing and gives them some control over the information they receive from your end. In simple words, the data transfer from your system will be split into two parts; the secured one, which uses VPN services, and the unsafe one, which uses your standard internet connection. With a full tunnel, you are going to use a VPN service all the time for all sorts of websites, apps, and data transfers. With split tunneling, you are getting more inclusive options.

Using any one of these two tunneling options entirely depends on the user’s preference. If you are someone who is working with highly confidential data, you might want to use a funnel tunnel all the time, even if it slows down your internet speed. So there are no loopholes left in your network that an attacker can take advantage of.

On the other hand, if you are more concerned about the lower bandwidth, you might want to leverage the split tunnel. Or split tunneling is a good option when you are working with a local area network (LAN).

Is It Safe to use Split Tunneling?

When it comes to using split tunneling, you are in a much safer position than not using the VPN service at all. Online predators are everywhere, and they are looking to get to your personal files and data in any way possible. When you disable the VPN service, you open the door for attackers to hack your data transfer, and websites and other unwanted parties can see your IP address.

With the use of split tunneling, you are only turning off the VPN service for a number of selected websites that you trust or for those apps on which you are not providing any confidential data that could cause trouble for you or for your business. Split tunneling should be used only for those you are completely confident in and know are employing the best security measures to keep your data safe from attackers. In order to protect your privacy and data, it is best to use encrypted VPN connections when you are entering any form of sensitive information or downloading software or files online.

One of the most significant plus points of using split tunneling is that it gives you the best of both worlds. You will get the speed and performance of a stable internet connection. In addition to this, you are also getting advanced levels of data security to keep your sensitive information secured from gaining into the hands of unwanted individuals. Apart from this, given below are some of the other benefits that you get from using split tunneling.

1. Conservation Of Your Bandwidth

When you enable split tunneling, the traffic which is of no use to be hidden will not be encrypted with the VPN. So it is likely to transfer at a much higher speed than the ones with VPN services enabled. There will be no encryption to stop your network from providing optimal speeds.

Employees that are working remotely can take advantage of a secure network connection through the VPN. A remote employee will have encrypted access to sensitive files and email in a much more secure way. At the same time, you will be able to access the other URLs, apps, and other contents of the website with the regular internet speed that your ISP is providing you.

When you make a full tunnel connection via VPN, the encryption of the VPN is going to block every single access point of your LAN. With the use of split tunneling, you are still able to access all your local resources, such as printers, storage devices, and more. At the same time, you have the security of a VPN for other sensitive tasks.

When it comes to streaming, a vast amount of the population wants to see the content of other countries. Or if you are someone who is living abroad and wants to stream content that was developed for your origin country. In that case, split tunneling can help you in accessing them with ease. Besides this, you will be able to access foreign content without having to change your IP address.

There are some potential risks that you should be aware of before you start using split tunneling. Given below, we have pointed them out for you, so you can decide whether split tunneling is good for you or not.

How to Use Split Tunneling In Various VPN Services?

It is usually easy to set up split tunneling if your VPN service provider comes with its own support. Given below, we have taken the example of NordVPN, which is one of the well-known VPN services that millions of people use to keep themselves protected online.

Therefore, the question that remains is whether split tunneling should be used or not. The answer depends on your requirements and usage. For example, if you have a program that can give you a similar level of online protection, then it makes more sense to use it than to split tunnel. If, on the other hand, you are working for a corporation and want a secure connection without compromising your internet connection’s bandwidth, the best choice is split tunneling.