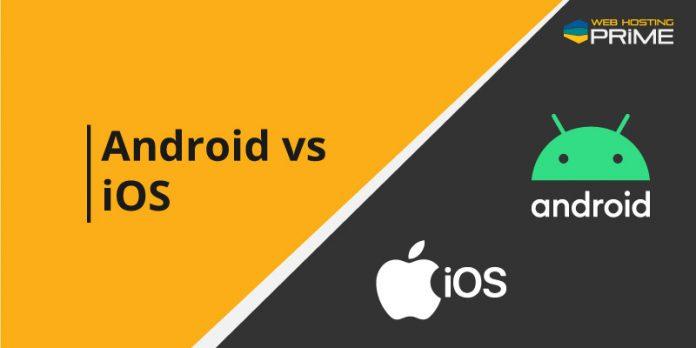 Google Android and Apple iOS are compared often. They both are operating systems used particularly in smartphones, and sometimes in tablets and laptops. Both the systems have their advantages. However, shifting from iOS to Android can be difficult. So, you should take care of it while buying either of the leading mobile OS.

There are a lot of things that you should consider before choosing between Android and iOS. Knowing the features, advantages, and disadvantages can help you choose the best device for yourself. To help you out, we have made an in-depth analysis of both the mobile operating systems in one place.

Android is a Linux-based mobile operating system. It has been developed for touchscreen mobile devices by Open Handset Alliance and sponsored by Google.

In October 2003, Android Inc. was founded by Andy Rubin in California. Thus, began the journey of android to becoming the world’s most commonly used smartphone platform. It was then in August of 2005 when Google took over and now Android is a subsidiary of Google Incorporation.

Android was intended to be for cameras. However, a low market for cameras led to the shift to smartphones. In 2007, Google declared the development of Android OS which led to the launching of the first android mobile in 2008.

Android applications refer to any software app built for the Android platform. Different developers can make their apps available through their websites. However, there is a designated online store for these applications.

The Google Play Store offers both free and paid android applications. As we discussed above, there are countless Android apps for you to choose from. So, you won’t be disappointed.

In June 2007, Apple launched iOS with the very first iPhone. From its first version to its latest, Apple has made many changes in the system. During summer every year, Apple comes forward to reinvent iOS by making it better and adding more features.

It was Steve Jobs who introduced the first iPhone along with iOS. In 2021, Apple released its iOS 14.4 and that’s how much the system has been improved.

Although both Android and iOS are quite different from each other, here are some of the similarities:

Android vs iOS: Comparison based on Various Factors

When it comes to privacy, both systems are at a risk. Your apps are to be blamed for privacy as many apps have the permission to get a list of details. You can either not use such apps which you believe to be a threat or you can limit granting permissions.

When it comes to a web browser, both systems have their own web browsers. While iOS has Safari, Android has Google Chrome. Both web browsers are the best in business.

But, people are still more familiar with Google Chrome as it can work on both iOS and Android, and is the most used desktop browser too.

Who is the Best?

Android and iOS both come with their pros and cons. What is best for you is what suits you the most. The efficiency of both mobile operating systems depends upon what you expect from them. Therefore, before you choose between Android or iOS, you should look at their pros and cons to see what would work the best for you.

If you are someone looking for a device that works smoothly without lagging, you should go for Android. I personally believe Android is way more user-friendly than iOS. Moreover, Android is better with storage.

While iOS does provide you with several updates, you would need storage for them and storage is often the major issue with iOS. Nonetheless, if you still want to go for iOS, you should invest in a tablet rather than a phone.

In addition to what was said above, Android has come to gather a lot of users for itself. It is indeed the most preferred mobile operating system. Because of its connectivity to Google, Android has time and again proved to be easier to use and more useful. Many people who have switched from iOS to Android have found Android to be better.

Android and iOS are the top two operating systems for mobile platforms. While Android is a subsidiary of Google, iOS is developed by Apple. There are many aspects of both these operating systems that are quite similar.

For instance, they both have the same basic functions, user interface, status bar and security features. Although they are quite similar in many aspects, Android and iOS vary greatly.

They are different in many aspects, such as device selection, voice commands, messaging, video calling, building and publishing applications, maps, and web browsing.

Despite all the pros and cons mentioned, Android truly comes out as the best operating system for mobile platforms because of its easily understandable interface and customization. Moreover, Android has a wide audience which is there to guarantee its effectiveness.

Now you know everything there is to know about Android vs iOS. Be it while buying a new device or simply flaunting your tech knowledge in front of your friend, this analysis will always help. That was all. You are ready to choose your operating system, now!

How to Update Android OS to the Latest Version?

How to Check macOS Version for Your Mac System?

How to Use SFTP to Securely Transfer Files with a Remote Server?

How to Use the Gmail SMTP Server to Send E-mails for Free?

How to Create Your Own Server at Home for Web Hosting?

Newspaper is your news, entertainment, music fashion website. We provide you with the latest breaking news and videos straight from the entertainment industry.