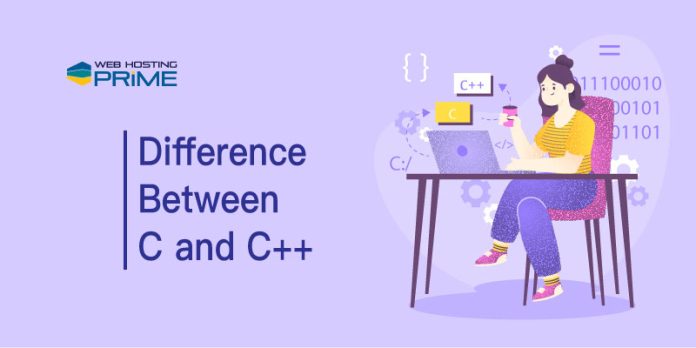 As we are stepping into the future, everything is computerized and technological advancement is at its peak. It is essential to learn computer languages, be it C, C++, Java, or Python. Apart from being the most useful and advanced languages for almost every field, these are some of the most interesting ones to use.

C and C++ are related languages, as the name implies. But C++ came after the C program. C++ is also a general-purpose language for the C program. This means that the C program is the basis of C++. If you have knowledge of languages like C, then it would be obvious that you can easily start with C++. C is the most accessible language to learn in the program. Once you learn the C++ language accurately, it will be quite easy to start learning other languages. You can learn Java programming or Python after this.

Today, you will get a clearer view of C and C++ and the differences between these languages.

History of C and C++

C was developed between the years 1969 and 1973 by a man named Dennis Ritchie at AT & T Labs. It was designed mainly to be used as a writing language for operating systems for microcomputers since these microcomputers had minimal memory.

C++, on the other hand, was developed in 1979 by Bjarne Stroustrup at Bell Labs. C++ was created as an extension of the C language. Since C language was a minimalistic language, he wanted to create something flexible that could provide high-level programming features and yet be similar to the C programming language.

In C language, two functions are used for input/ output and printing commands. They are;

In C++, there are also two functions used for input/ output. Yet, they are different from the C language. These are:

C language contains 32 keywords, whereas C++ contains 63 keywords. These are the held words that have a specific reason in the language. These words are constantly written in lower case. They cannot be used for a variable or a function name. Some examples of keywords are:

You will find numerous keywords just the same in both languages. Thus, C++ is the extended version of C; it consists of many of its keywords and many new keywords are also added.

The security of data in both languages is also very different. A user needs to know whether their data is protected or not. C++ provides more data security than the C language. It encapsulates the data present, which hides the data to ensure that all the data structures and operations used according to the plan are protected from all threats.

On the other hand, the C language does not support this function; it does not encapsulate the data roaming and act as a free establishment. Outside code can manipulate this type of free data.

Since C++ is a hybrid language, it supports many features that the C language does not. C++ supports both function overloading and operator overloading. It also provides its users with namespace features and reference variable functionality.

It means that these functions take in different types of data and give out completely different outputs. It ultimately depends on the kind of data that you are putting in. At the same time, the C language supports any of these features. C is a less complex language than C++, so it does not support this function.

C language is a procedural programming language which makes it a function-oriented language. Since it was built to provide low-level access to memory and language constructs that will efficiently tell all the workings of the machinery, it favors the procedure part of the problem more than it favors the objects. On the other hand, due to its object-oriented nature, C++ is known for its object-oriented language. It views all of the issues as things involved in a problem rather than seeing them as a procedure.

This is because these functions have variables in them, and we can create all the types of data structures with variables inside the facilities of C++. These variables are ubiquitous in C++ structures.

From all the above points, we have established that the C language is a subset of C++. And C++ is the superset of the C language.

Some similarities between both the languages

As we have discussed earlier, almost all the keywords of the C language are used in C++ and perform the same functions.

By reading the above article, you must have understood the contrasts between the C and C++ programming languages. The two of them are among the main choices for getting started with programming. Henceforth, it is an incredible chance to look over your C and C++ abilities or begin creating them, on the off chance that you haven’t as of yet.

It would be great if we could start first with the C language and then move towards the C++ language, as it will enhance your programming skills from the lowest level to the highest.

Difference between C++ vs C#