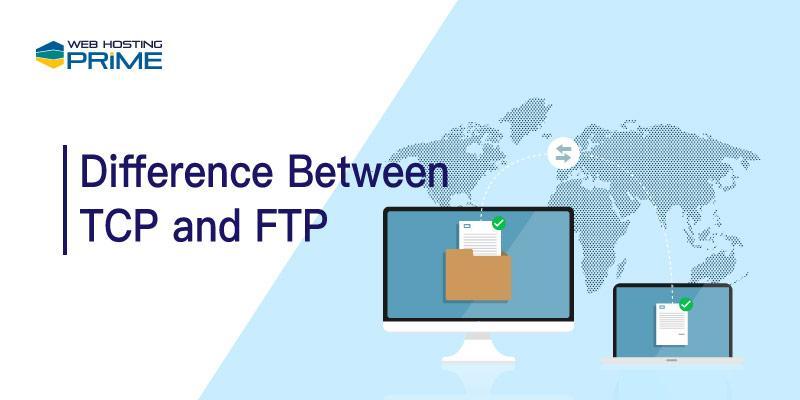 FTP and TCP are terms we often encounter on the internet and the web. However, you need to know that FTP and TCP are two network protocols that work quite differently. While TCP connects different computers and networks, FTP facilitates the transfer of files from one system to another in a network.

Here in this article, we have explained FTP and TCP in detail, which will help you understand their importance. So, let us get started.

FTP or File Transfer Protocol is considered to be a standard network protocol. It has been in use for many decades. This protocol transfers files and sensitive data between the two devices connected over a network through the client-server model.

FTP allows you to exchange and manipulate files in the TCP/IP network. With FTP, user credentials can also be sent. However, the transferred files are not encrypted. Thus, files and information sent over FTP are vulnerable.

TCP or Transmission Control Protocol is considered a communication standard that allows application programs and devices to exchange data and messages over a network. TCP follows the standards provided by the Internet Engineering Task Force (IETF).

TCP defines ways to establish and maintain a network connection through which the data is exchanged. Additionally, it determines how to break the application data into groups so the network can transfer the data and ensure successful delivery.

The best thing about TCP is that it is reliable, secure, and offers efficient data transfer.

TCP works with Internet Protocol (IP). IP is a principal communications protocol that dictates how the data should be sent to the internet from one network to another.

TCP and IP are the basic standards that define the internet rules and are considered the most used protocols by internet servers.

Difference Between FTP and TCP, TCP vs FTP

FTP or file transfer protocol helps to transfer files between the client and the server. On the other hand, TCP is a communication and transmission protocol that allows devices to exchange data and messages. They come together when the FTP sends data to the TCP/IP connection.

How Does TCP Exchange Data?

TCP is a connection-oriented protocol that establishes and maintains connections until the application programs have completed exchanging the messages at each end. After the connection is established, it breaks a large amount of data into small groups and ensures data integrity throughout the transmission process.

Relationship Between TCP and IP

These two protocols are used together and rely on each other for data to reach a destination safely. Therefore, their collective use is referred to as TCP/IP.

The TCP/IP model shows how the data is exchanged and organized in different networks. It is a brief version of the Open Systems Interconnection Model or the OSI Model. The TCP model consists of four layers: application layer, transport layer, internet layer, and network interface layer.

The Transport Layer determines how much data needs to be sent, where to send it, and at what speed. It builds on the Application Layer’s messages and ensures that the data units are delivered without errors and in the correct sequence. This layer ensures reliability and efficiency in data transfer through flow control, error control, and segmentation or de-segmentation.

The Network Interface Layer defines all the details of how the data should be sent using the network. It defines ways to send the data physically. Additionally, it is responsible for transmitting data between different devices on the same network.

FTP or File Transfer Protocol and TCP or Transmission Control Protocol are data transfer protocols that work quite differently. While TCP helps connect different computers, FTP transfers data files from one system to another. This post compares FTP and TCP, how they transfer files and the TCP model.