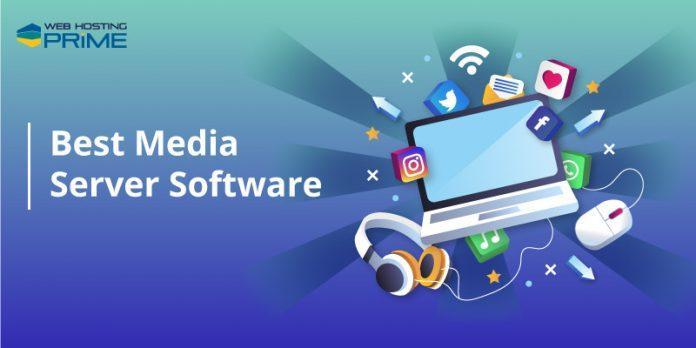 The media server is a combination of computer appliances and application software that stores different forms of media i.e. audio, video, or images. Any media that has been stored on a media server can be streamed online over the network.

While commercial web servers host media for large websites, like Netflix, Hulu, Spotify, and many more, any device like a NAS drive or a personal computer can also act as a media server – as long as the media server is compatible with a device and its operating system.

A personal media collection of movies, TV shows, photographs, and music can be curated on the same. For instance, one’s PC will host movies/photo galleries for the user.

One only needs to cobble a library of digital files which can be then accessed virtually from anywhere. By just synchronizing that content with some media server software, one can access that library from anyplace anytime using compatible client devices. Let’s talk about the best 10 media server software available right now!

Following is a list of the top 10 best media server software detailing their features. You can choose the one that best fit your needs:

Plex is a global streaming service of free, ad-supported video that supports large media files. It is based on the client-server model and the application is well supported by operating systems like Windows, macOS, and Linux.

Being easy to install and a highly flexible system for managing different types of media libraries, anyone can easily avail of its benefits and enjoy unlimited access to TV shows, movies, personal videos, and much more.

For a smooth streaming experience, the server needs to have an i3 processor (or its equivalent) or better, at least 2GB of RAM and a lot of storage space, enough to store all your movies, music, TV shows, and images.

To delete the junk files, a cleaning app on the computer and a good quality antivirus is recommended. To use Plex, 2 apps are needed:

Aside from standalone Plex media player apps, users can access Plex accounts and media files through a web app using a web browser via app.plex.tv/desktop.

Watch your favorite movies, videos, series, and channels at one single place with Stremio. It is a modern, open-source multimedia center and is a one-stop destination for all video entertainment lovers.

The media server software is well supported by both desktop and mobile devices. With this media center, one can discover, watch, and save videos from third-party websites easily. Content is aggregated by the addon feature of the software.

Once one installs Stremio on the device and creates an account, visit the addon catalog and install any addon of choice and the app is ready to use. Let’s quickly see how to install a Stremio add-on to watch free content:

PlayOn lets users have unlimited access to numerous online content providers and watch and save videos. The software suite consists of PlayOn Cloud and PlayOn Desktop.

With PlayOn Cloud, users can access digital videos online and record those using native iOS or Android mobile device applications. While PlayOn Desktop acts as a streaming dashboard and hub on PC.

For Playon, the computer must have Windows 10, 8/8.1, or 7, Internet Explorer 9 or better as the recommended web browser, at least 512 Megabytes of memory (1 GB recommended), and an active internet connection.

Emby Server is a free and open-source media server software. Thus, code can be easily edited and customized as per the requirements. For example, users can apply custom CSS to its web app for adding new themes.

The media server software has inbuilt features to organize, play, and stream audio and video to a variety of devices. The software is available for Android, iPhone, Android TV, Amazon Fire TV, Chromecast, Roku, Xbox, and home theater Computers.

Emby media is one of the most common media servers available for streaming media to various devices either locally or remotely via the internet. One can think of it as his own Netflix that he can take wherever he goes and can also share it with a family. It is based on a client-server model. While Server is the part that stores the media library and acts as media centers for all the clients, Client is the name for all the terminal devices or Apps that playback media from the Emby Server. A fully functional media server requires one server and at least one client.

Install Emby Server and the configuration window will open. Choose the language and the type of content you want to watch. Then specify the location to store the content such as a local drive, a mapped drive, and everything is set.

Built by the people, for the people, OSMC is a free and open-source media platform that provides unrestricted access to the media. Though based on Linux, the software is well known for easy installation and intuitive use as everything is managed using the awesome OSMC interface.

The media server software is one of the leading media servers in terms of feature sets based on the Kodi project and supports a large number of sharing protocols holding up all major media formats out there in the market.

To install OSMC, select an operating system of your choice and download OSMC, this will create a bootable image for the device and one is ready to go.

For Raspberry Pi, download an OSMC disk image and run the same using software like balenaEtcher. OSMC installation is free but running projects on it costs money.

Developed by the XBMC Foundation, Kodi has been specially designed to play movies and is also free to use. This software offers an interactive user interface that is well supported on multiple operating systems and hardware platforms.

Kodi allows users to watch digital media from online sites as well as from local and network storage media. Formats like MIDI, MPEG-1, MPEG-2, and MPEG-4 are supported to provide uninterrupted access to the content.

For Windows, Kodi requires Windows 7 or higher, a GPU that supports at least DirectX version 9.0c. If a user is using Linux then a CPU that supports SSE2, and 2GB or more in a computer for multipurpose use.

The first step is installation. After that, configure the Kodi and add desired movies and shows. The next step is the UPnP protocol to let other devices access this server. For those who love technology, there is multiple add- ons to play with.

With this software, one can stream media to any device without much hassle. It is a free open-source platform that can collect and store all audio, video, photos, and much more in a single place.

Jellyfin works well with Android, Chrome, and Firefox and can be installed on a NAS server or PC for streaming audio and video files to smart televisions, phones, and other devices.

Zero data is tracked with Jellyfin as there are no central servers. Also, the software is licensed under the GNU GPL license. It is compatible with any device with the .NET core runtime and running on to Linux, macOS, Docker, or Windows.

The prerequisites for Jellyfin media server are Windows x86/x64 or Linux generic amd64. It also works well on macOS, Ubuntu, and container images.

Install jellyfin and manage service using one of the many packages available, like Raw Debian packages. Jellyfin also provides a collection of optional plugins, for example, Bookshelf, Email, Kodi Sync Queue, and more that can be installed when desired from the plugin catalog in the settings.

Subsonic is a personal freeware media streamer that has been made available by Sindre Mehus for Windows. It enables you to listen to music from any browser from anywhere.

MP3, AAC, FLAC and WMA, and OGG audio-video formats are well supported by the software and are available for Android, iPhone, Roku, and many more. Users can create a playlist and share it with other people. Also, its transcoding engine works with lossless and lossy formats for on-the-fly MP3 conversion.

The Subsonic media server is a java application that runs on all supported platforms and requires no additional hardware. For Debian/Ubuntu installation, install Java first using the command sudo apt-get install openjdk-8-jre.

Using this software, one can connect the server directly to television and watch TV series/shows of his choice at any hour. Media Portal is a free and open-source digital video recorder software project and is ideal to turn your PC into a rich media center.

The portal allows the user to use a remote controller to manage and access the media. It offers the most powerful TV Engine and PVR. The plugin feature allows watching shows online and listening to music from online services, such as Last.fm, and launching other applications such as games.

Recordings can take up to 8GB per hour. The media portal supports Windows 7, Windows 8, and Windows 10. For installation on Windows 10 visit the official website and download Media Portal 2 and unzip the downloaded file. run the MP2-Setup.exe setup. While installing it requires additional files to download such as .NET Framework 4.5.1, DirectX 9 Runtime.

It is a fully-featured media server that serves as the ultimate software for streaming movies, music, and photos to your UPnP (Universal Plug and Play) and DLN (Digital Living Network Alliance) devices and web browsers.

Using Mezzoma, all the digital media files can be streamed to the TV, home theater, games consoles, and digital media appliances from the PC that is acting as the media center. It supports reading and transcoding all popular files, containers, audio formats, etc.

The latest installation package of Mezzoma takes 102.2 MB on disk, a minimum of 1024×600, a 24-bit resolution display, a powerful multi-core CPU. Windows XP and later versions all support Mezzoma.

There are two ways to run the Mezzoma server- Console application and Windows Service. With console application, it runs as an invisible application under the same windows user account as one has logged in. While runs as a Windows service under windows local system account in the other way.

The media server needs a combination of both software and hardware capable of fulfilling the needs of multiple clients. The best media server will be the one that best meets the user’s demand in terms of cost, operating system, protocols, and other key features. Choose the media server that suits best to your taste.