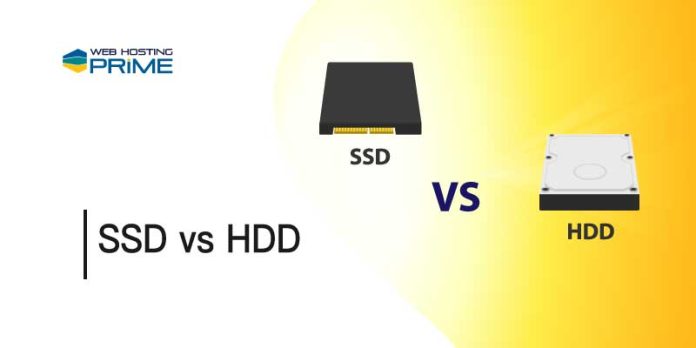 What should I buy: SSD or HDD? It was a frequent question asked a decade ago when first-generation SSDs became available in laptops and computers, allowing for faster reading and writing than HDDs. Is the SSD a significant improvement, or is it just another way to get gamers to spend a lot of money on building the ultimate PC to beat their friends? Let’s find out below.

In the history of computer hardware, an HDD is relatively old technology. The first-ever hard drive was the IBM 650 RAMC built-in in 1956. It used 50 24-inches of wide platters to provide the storage of 3.75 MB. This is the average size of a single MP3 file, which clearly shows how far we have come from manufacturing hard drives. The standardized form factor of hard drives 5.25 inches was created in the early 1980s. Currently, there are 2.5-inch drives for notebooks and laptops, and 3.5-inch drives for desktops.

Furthermore, it’s not just the form factor that has seen a tremendous change in HDD, but even the internal cable interface has seen an overhaul. It started with serial, and then moved on to IDE to SCSI, and is now using ATA. The SCI and ATA combined to form SATA that we see in so many hard drives these days. All of these wire interfaces do the same thing, connecting the hard drive to the motherboard of the PC for data exchange.

The hard drives work by using platters that are made of magnetic sheet. These platters are divided into billions of small areas. Each of these areas can be magnetized independently to store 1 and demagnetized to store 0. Magnetism is used to store data because even after the power is turned off, the magnetic platter will remain magnetized and retain the data positions.

This is how an HDD stores your data and keeps it in the same state even after turning off the computer. SATA hard drives, the most recent hard drives, have replaced PATA as they perform better in every way. Transfer speeds range from 150 to 600 megabytes per second. In addition, SATA uses less power, 250mV, in comparison to PATA 5V. If you look at the physical difference, you will notice that SATA cables are thinner and more flexible.

Below we have listed the benefits of HDD, and you should consider these advantages when choosing a new storage drive for your computer.

If you are running low on budget and don’t want to spend too much money on storage, but still want a reliable solution then HDD is your go-to device. A traditional non-volatile HDD will cost half the price of an SSD with the same or more capacity. Due to its low manufacturing cost, the HDD has such a low price. Furthermore, HDDs offer the best value for your money even if you’re looking for an external drive.

There is no denying the fact that the computer hardware market is expanding at a rapid speed, yet the number of companies making hardware is not growing at an increasing pace. Thus, there’s a shortage of hardware.

SSDs and Optane memory are not the only hard-to-buy devices. In these challenging times, if you want to build a PC and are not able to find an SSD without thinking twice, you can go for HDD, as it is readily available and comes with a massive storage option.

In terms of storage capacity, HDD can go up to 5TB which is more than enough if you want a hard drive for an average home use computer. Further, the hard drives can be expanded up to 10 TB if necessary.

A lot of users think HDD has moving parts such as a platter, so its life span is less than that of SSD. But in truth, HDD has a better lifespan because in HDD, the data is directly written in the platter disks, and in most cases, it does not wear out. Whereas SSDs have a finite number of read and write cycles, and are managed by flash memories. In HDD, there’s no flash memory used. Hence, HDD comes with a five-year warranty.

Let us also discuss the drawbacks of HDD to enable our readers to know exactly what type of performance they will be getting when using HDD.

SSDs were brought in due to two reasons, the first was the speed, and the second was the physical size. The speed of a hard drive is entirely determined by the RPM at which its platter can spin. According to the variants, the RPM may differ. However, a traditional hard drive will always perform subpar to SSDs because of the flash memory used in them.

Moreover, the method of storing data in hard drives is based on mechanical structure and does have some moving parts, which results in its speed limitation. In the same way, data stored in hard drives is fragmented, and when a computer needs to access that data, it accesses it from those small fragments located on the magnetic platter.

Another big issue with hard drives is their physical size. Due to the presence of mechanical parts, HDD cannot be manufactured smaller than a certain limit. As a result, they are not ideal for portable computing.

These two drawbacks have made scientists and engineers look for other options which they found in SDDs. was in SSDs.

SSDs were discovered in the early 1950s, although what we know today as SSDs first became available in 2007. The OLPC XO-1 used a 1GB SSD in 2007, while the Asus Eee PC 700 series used a 2GB one. The SSD chips were arranged on the motherboard, and they could not be removed or replaced. As mobile computers became more mainstream, SSD features increased. When the technology changed at the start of 2011, we got DIMM-like SSDs. In the very first Macbook Air, SSDs were used, and from there, we got MiniPCI SSD cards. The capacity of the 2.5-inch SSD is now 8 TB which is even more than the HDD. Excellent memory size, however, comes with the grand prize.

To understand how the SSD reads and writes data, we need to understand the purpose of flash memory. Flash memory works quite like RAM, but unlike RAM, which dumps all its data when the power is down, the data present in the SSD persists. SSD architecture has a grid that consists of electric cells which quickly receive and send data. These grids present in the SSDs are separated by the sections called pages that store your data.

The pages are put together to form a single block in SSD storage space. SSDs are called solid-state drives because they don’t have any moving parts and they can only write the data on empty pages. In comparison to SSDD, data in HDD can be easily overwritten as it is written at any location on the plate at any time.

The SSD’s functionality doesn’t allow it to delete the data or empty the pages. This is accomplished by pushing the entire block’s value into the SSD’s memory. Afterward, the data is copied from memory back to the block, and the unused pages are left blank.

Given below are the benefits of using an SSD. SSD.

There are no moving parts in the SSDs, so it does come with a shock resistance like other traditional hard drives. In addition, they are pretty resistant to standard drops, accidents, and wear and tear since there are no small parts that could come loose from their place and scratch the inside hardware of the SSD. So if you are having an SSD installed in your laptop and it happens to fall,you will probably need to replace the screen, not the SSD drive.

As we have already mentioned earlier, it does not have any moving parts. As a result, there are no compromises when it comes to speed. SSDs are ready to read and write the data when you want. Thus, it provides faster boot times, shorter application loading times, and provides better system performance.

As it does not have any mechanical parts, it does not require power to move them. As a result, the batteries of portable systems with SSDs as their only storage device will last longer.

The SSDs come in two categories:

1- Standard 2.5 inch SSD which is used in both desktops and laptops. 2- M.2 SSDs that are inserted in a dedicated PCI-E express slot present on the motherboard.

You can install the SSD in your systems with just one screw. The M.2 SSD and motherboard don’t have any wire connections, resulting in maximum transfer rates.

Again no moving part means stealth working. The latest hard drives spin at a very high RPM rate to match the read and write speeds of SSDs. Therefore, when you copy something to the hard drive, it will make a lot of noise and heat. But both of these things are not present in SSD.

The biggest problem with SSD is the pricing; as there is a global shortage of computer hardware, the prices of SSDs keep on increasing. As we write this article, a 500 GB SSD costs around $100. Additionally, these prices are not going to come down based on the latest leaks, which indicate that silicon chips are not being produced as expected.

If, due to some reason, your SSD gets corrupted, then there is no way to get your data back. At times, this could be a good thing because it will keep the data secure, and once deleted, nobody can reaccess it. On the other hand, the permanent deletion of the data could have irreparable consequences.

Discussed above are the differences between HDD and SSD; both of these are great options in terms of a storage device. They both have their benefits and drawbacks, but the choice ultimately comes down to user preference and what trade-off they are willing to make when buying the storage device. If budget is not your concern, we strongly recommend going with SSDs as they provide better read and write speeds. But if you are looking for a massive storage device, then HDD is your best bet.

MySQL vs MySQLi: Which One Performs Better?

SSL vs. TLS: Which One Should You Choose?

Difference Between JPG and JPEG